Popular Asian Cities in the UK

The UK has become a vibrant, multicultural nation with a diverse range of people from differing backgrounds and ethnicities. Some areas however, have a higher concentration of Asians than others. DESIblitz takes a look into these famous hotspots.

People of different backgrounds can connect as well as learn from each other.

The UK today has many hotspots which can be called popular ‘Asian cities’, which boast the mixture of culture and ethnicity brought over from the South Asian homelands.

The migration of South Asians to the UK began with the arrival of East India Trading Company to the Indian Subcontinent. The influx of South Asians increased during the British Raj and the independence of India, Pakistan, Sri Lanka and Bangladesh from the British Rule.

Working and settling in and around the nation’s industrial towns and cities, they gradually created cultural hotspots and thriving communities for themselves. Businesses have shot up rapidly with their arrival. From everything to grocers, restaurants and takeaways to clothes and entertainment.

South Asians rose from an initial 70,000 people at the beginning of the twentieth century to a sizeable 2.5 million today. They now contribute to 6% of the nation’s GDP.

With the strong presence of South Asian communities and their noticeable contribution to local life, they have had plenty of coverage and attraction in the media, including documentaries in literature, art, music, academic writing. They have also been in the reports of local councils and other organisations, and in tourist brochures and festivals.

The second largest city in the UK, Birmingham, is home to wide array of Asian communities, and it is growing at a rapid rate each year. Soho Road, home to any of the Indian Sikh community is a bustling attraction of clothing shops and restaurants. Ladypool Road, Stratford Road and Alum Rock Road are some of the cultural epicentres of the South Asian community. 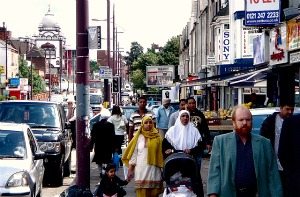 Of course, Birmingham is also famous for its ‘Balti Triangle’ in Small Heath and Sparkhill. There are over 50 restaurants that house the best Indian foods and balti’s.

The Balti came to Birmingham in the 1970’s due to the large migration of Pakistani and Kashmiri settlers. Ever since the Triangle has attracted thousands of customers each year and has grown into a multi-million-pound industry.

Leicester enjoys the highest ethnic minority population in the whole of the UK, at almost 30%. Pakistani’s and Indian sects from the biggest communities, including Gujarati’s, Kokni’s and African descended Asians.

It’s famous Melton Road is also referred to as the ‘Golden Mile’ because of its never-ending jewellery counters and stores. Indian restaurants and takeaways and colourful shops are also in great abundance.

Interestingly, the city is also home to the highest number of young British Asians under the age of 21. As a result, the city is constantly updating to suit the newer generations.

Bradford, in South Yorkshire, is an incredibly Asian-populated city, known as one of the British ‘Curry Capitals’. It is recognised globally for its rich culture. 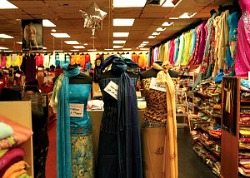 Although most immigrants came originally to work in the mills, the failure of the textiles industry (which ironically was partly due to increased competition from India, South East Asia and the Far East), led to the people moving to other jobs and work. Bradford is also home to a number of Asian festivals and organisations.

One particular interest to the visitors of Bradford are the impressive mosques, and its famous curry houses and restaurants. There is also a wide range of Indian stores, boutiques and markets selling exquisite saris and materials. This includes the world-famous ‘Bombay Stores’, which is the UK’s largest Asian department store!

Mohammed Ajeeb has lived in Bradford for forty years. As Lord Mayor of Bradford in 1985-6, he was the first Asian Lord Mayor in Britain. He says:

“Bradford means everything to me. Bradford gave me status and respect. It gave me some problems too. It is my home. It is my city. There is a large community with which I can identify myself.”

Stand-up comedian Isma Almas grew up on a council estate in Bradford as one of the first Asian families to live there. She then returned to the city after going away to university. Although she remembers the riots and protests, she still feels safe there: “Bradford feels like a safe place to be,” she says. 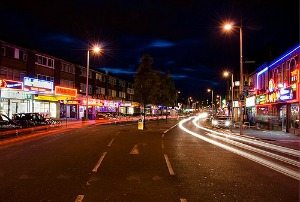 Travel further north to Manchester and Wimslow Road is definitely bound to cross your path at some point. It has rapidly become a central hangout for young British Asians due to the rising number of sheesha and dessert places.

But it’s best known for the ‘Curry Mile’ due to the huge number of restaurants dotted around Rusholme.

With more than 70 restaurants and takeaways open until the early hours of the morning, it is thought to be the biggest collection of South Asian cuisine outside of the Indian subcontinent.

The capital of England, London, of course, is home to a multifarious assortment of Indian’s, Pakistani’s, Bangladeshi’s and Sri Lankan’s that together, represent a remarkable 12% of Greater London’s residents.

As a result, the capital is home to numerous hotspots and areas that cater to the South Asian lifestyle.

Brick Lane is one such hotspot. Interestingly, it is known historically as the home to many immigrants, including Huguenots from France, the Jews and the Irish, and, more recently, its Bangladeshi population.

Today, it is the heart of the city’s Bangladeshi-Sylheti community and nicknamed ‘Banglatown’. It is famous for its many curry houses. In the later 20th century, Bangladeshi’s formed the majority group of immigrants and gradually dominated the area. 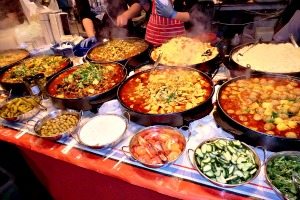 There are many attractions in Brick Lane, including its markets, shops, galleries, bars and restaurants and famous festivals.

Monica Ali’s best-selling book, Brick Lane, was based on the lives of first generation Asians moving to the area.

It has evolved into an exciting art and fashion hub for students over the years. Like Shoreditch, it features numerous exhibition spaces. Interestingly, the area is also internationally famous for its graffiti. Banksy, D*Face and Ben Eine have all etched their art onto its walls.

Southall is famous for its thriving Punjabi community, with street festivals celebrating their vibrant culture. It is sometimes known as ‘Little India’and is renowned for Southall Broadway’s Indian shops, cinemas and restaurants.

It’s population initially grew due to opportunities available and expanding employment. It’s location has also been used in Bollywood films such as Patiala House and Goal!

Harrow is a diverse borough and has the largest concentration of Sri Lankan Tamils and the highest density of Gujarati Hindus in the UK. Harrow is renowned for its large South Asian festival, ‘Under One Sky’, which celebrates music, dance, sports and more.

The spread of South Asians across the UK and the rest of the world have had a huge and continuing impact on both culture and urban development. People of different backgrounds can connect as well as learn from each other and share experiences.

With more and more communities building and expanding, what we do know for sure, is that cultural diversity in Britain is here to stay especially in the popular Asian cities.

Meera grew up surrounded with desi culture, music, and Bollywood. She’s a classical dancer and mehndi artist who loves everything connected with the Indian film and television industry and the British Asian scene. Her life motto is “do what makes you happy."
The Asian Rich List 2013
Bala Thakrar ~ A Charitable Soul