The Peacock Theatre welcomed everyone onboard the Taj Express for the opening night of this shining Bollywood musical. The show includes music by AR Rahman.

"There isn’t another show which has such a mass appeal."

West End’s Peacock Theatre successfully greeted everyone aboard the Taj Express for the opening night of this glitzy Bollywood musical.

The spectacular show which had everyone up on their feet was presented by Bollywood’s young acclaimed dancers’ Vaibhavi Merchant and Shruti Merchant.

Vaibhavi and Shruti are known for the Australian musical, The Merchants of Bollywood (2006).

The brother-sister duo brought back this dazzling show following a terrific run in Summer 2017.

With fresh choreography and brilliant costumes, Taj Express is a lighthearted, energetic musical which follows the journey and struggles of young aspiring composer ‘Shankar.’

‘Shankar’ is writing his first soundtrack to a Bollywood film. He has been hired by a cutthroat boss who requires frequent changes to be made. And demands ‘Shankar’ and his team of disgruntled musicians to work throughout the night.

Inspired by his idol AR Rahman, ‘Shankar’ discovers his road to success in Bollywood, an established film industry of the world.

The theatrical show also focuses upon the people behind the screen who work their magic to make dreams into a reality.

Let’s take a closer look at this contemporary production, which transfers the kaleidoscopic colours of India onto the stage: 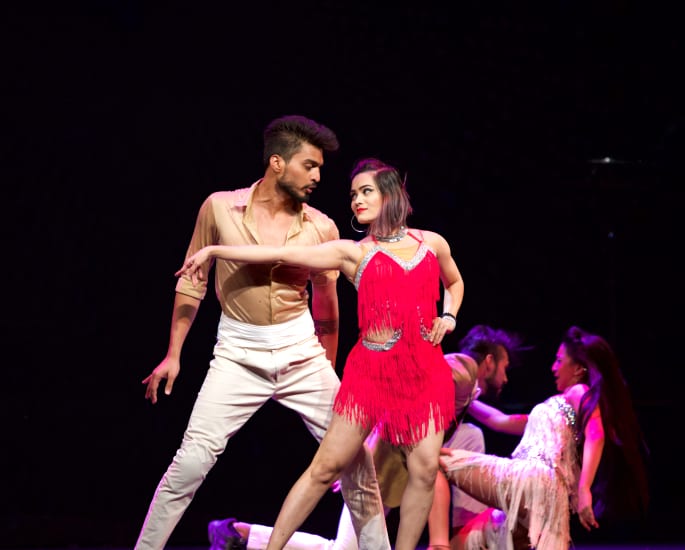 Besides Vaibhavi Merchant and Shruti Merchant directing and producing the show, Pranav Merchant is the Executive Director.

The Merchant family members are very well established in Bollywood and have been involved with top Bollywood productions for decades.

Though not related Salim and Sulaiman Merchant were partly in charge of the musical score.

Toby Gough who is also the writer/director for The Merchants of Bollywood (2006) once again teamed up with the Merchant family as a writer for Taj Express.

DESIblitz exclusively caught up with Toby who shared his thoughts on working under Quintessence Entertainment Productions founded by Shruti. He said:

“They have a team of the best Dancers and performers in Bollywood and combine them with the skills which have been passed down.”

A Journey to Happiness

The film that ‘Shankar’ is writing a script to is a love story called Taj Express.

This is a story where the famous actress ‘Kareena Kaboom’ falls in love with dashing street hero Arjun.

‘Kareena’ and ‘Arjun’ are the two lead characters of Shankar’s script.

With dance bringing them together, ‘Arjun’ shows ‘Kareena’ how to lead a normal life by taking her away to his hometown where she is not recognised. The couple travel on the superb Taj Express.

The beautiful ‘Kareena’ feels a new sense of freedom in new surroundings whilst her relationship with ‘Arjun’ develops.

Of course, this growing relationship between the two lovebirds is met with turmoil when a gang try to intervene and take ‘Kareena.’

As with so many good Bollywood productions, there are fight scenes set to very dramatic music before all is resolved.

In this case, thanks to an extraordinary coincidence, everyone lives happily ever after.

The encouragement from crowd participation combined with a varied soundtrack of all styles made this wonderful production a pleasing experience for everyone who attended. 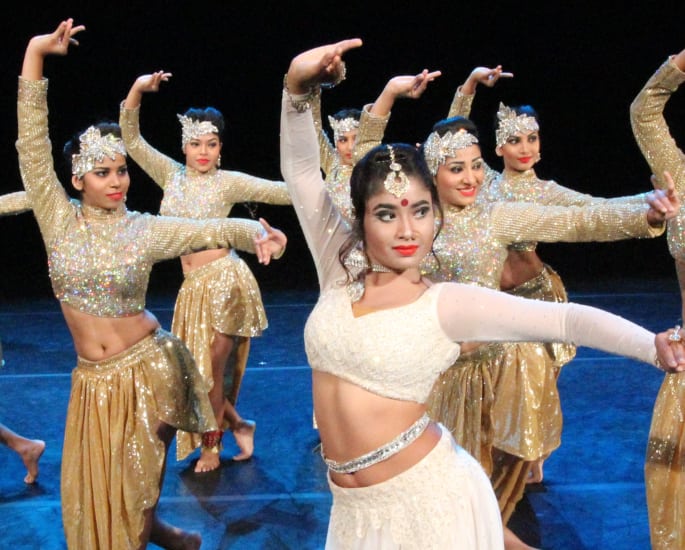 The script of this musical is appealing to all due to its fusion of eastern and western culture.

It does this in several ways. This is mainly done via ‘Shankar’ and his funny guitarist sidekick through the narration.

The guitarist gets distracted from writing music for the film during one part of the show. He starts to play music by Van Halen, a legendary western rock band from the 70’s and 80’s.

The guitarist is soon told off and brought back to the task of score writing a Bollywood film with associated music.

On another occasion,  the funny guitarist jokes of how people in the audience should count themselves privileged that he is willing to give them a free yoga lesson.

He jokes about how people in the west love to pay ridiculous amounts to Yogi’s and the likes of Dr Deepak Chopra.

The script makes clever use of modern-day western political references such as the war of words between US President Donald Trump and London Mayor Sadiq Khan during 2017.

The musical also makes fun of stereotypical Bollywood themes with ideas such as a man and a woman falling in love when it is raining.

These themes and ideas are set to songs such as the AR Rahman hit ‘Jai Ho’ from the British film Slumdog Millionaire (2008).

During a fight scene, the music is Hip Hop influenced by heavy beats and sounds.

The dance routines during this scene also seem to reflect urban Hip Hop culture which has developed in the western world. The choreography is much bolder and moves are harsher in this western street style of dance.

The crowd were drawn to get up and dance leaving many empty seats during the performance.

This is courtesy of the fantastic soundtrack and the short Bhangra lesson which was given by Shankar’s guitarist.

The title track to Taj Express was put together and composed especially for the musical by Salim and Sulaiman Merchant. Whereas the rest of the soundtrack track included a mixture of low and up-tempo songs, including compositions by Monty Sharma.

The song choices were carefully selected and fitting for each scene. The unforgettable track-list included: 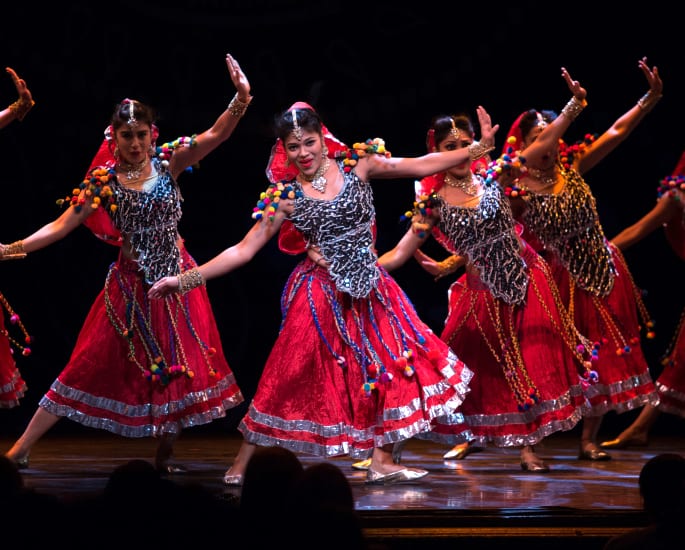 The choreography in this musical was so tight and the dancers looked exquisite on stage in their eye-catching costumes.

The dancing cast comprised of the crème de la crème in Bollywood, with choreographer Vaibhavi Merchant making maximum use of their skills.

The routines were beautifully choreographed to the wonderful music with lots of high energy and passion. Vaibhavi, the gifted choreographer stated:

“I think dancing and Bollywood productions need to have a certain energy. Yes there is a form to it and there is a lot of training to it, but if you don’t have it in your soul.

“It is just not Bollywood and it isn’t Indian. We need to connect to the audience from the word go. We try to bring the raw energy on stage.”

Dancer Rahul Sonawane exclusively spoke to DESIbitz of his high and low moments related to the production saying:

“The best bit is being on stage performing to such a great crowd. The worst bit is getting off the stage.”

The energy and spirit from the cast of this show were visibly apparent and could be felt by everyone in the audience.

Many of them decided to get involved with the action themselves.

“We used the A-list of Bollywood casting and we required everyone to give 100 per cent.

“London is very lucky to have these people here. There isn’t another show which has such a mass appeal.

As ‘Shankar’ worked his way through the film script with his musicians, the packed audience were shown the wonderful scenes and dances of the Bollywood film that was being created.

There are amazing dance sequences showcasing flashy Bollywood moves. As aforementioned, the story is held together by the funny narration of ‘Shankar

and his funny guitarist Raina.

‘Jai Ho’ from the blockbuster movie Slumdog Millionaire (2008) adds the very best to this show. 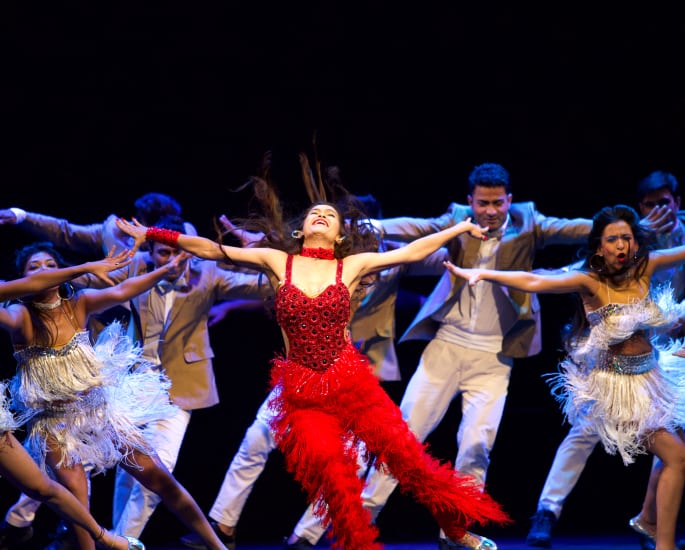 The World is a Stage

The Mumbai based musical romance has grown in reputation and demand. There has been so much buzz around Taj Express that it has become an instant hit across the UK.

Taj Express has earlier toured cities such as Liverpool (2018), Birmingham (2018), Sheffield (2018) and many more. But the reach of this show has not just stopped there.

DESIblitz who exclusively met up with Vidyuth Gargi (Shankar) spoke about the gruelling schedule mentioning:

“Because we have been on tour, the challenge has been to keep up the energy jumping from one place to the other.

“We did a US tour, we have been to Hong Kong, we did a week in Istanbul. To be honest the people who have the real challenge are the dancers.

“I just say a few lines and then get off the stage. The dancers are the real heroes, they give so much energy.”

Mumbai Masterclass and a Night to Remember

After the amazing show had finished, the audience were treated to a Bollywood masterclass.

Led by dancer Rahul Sonawane and accompanied by Puja Bnarji and Sonali, audience members were shown a variety of routines to many Hindi songs.

The crowd gathered to eagerly participate in some of the dancing.

This part of the evening was quite hilarious due to the awkward movements of the many excited participants.

Despite everyone’s best efforts, the class reminded all about the difficulty of Bollywood moves. Hence this demonstrated the value of how these professionals make all these moves look so easy.

The class lasted for around 20 minutes and was a delightful dip into the world of dance for all who took part.

The opening night of Taj Express at the Peacock Theatre was phenomenal with all the glitz and glamour, wonderful music and show-stopping dance moves as expected in a theatrical production. 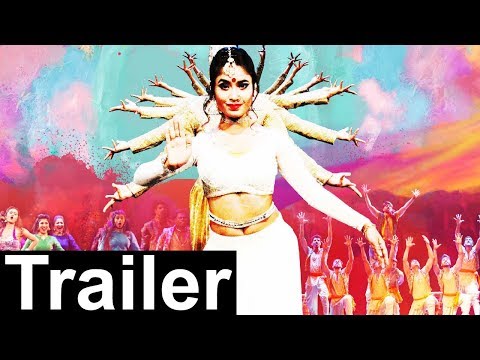 Other than the characters mentioned, ‘Saraswati’ features in the cast also. While Abhijit Vaghani is the Music Director, Stephen Alcaraz is the technical director of this production.

Taj Express is a show highly recommended. Book your tickets here to take a ride on the marvellous Taj Express.

Anusha Nava is singer, songwriter, actor and presenter with a passion for spreading positivity, love and connecting with people. Anusha lives by one motto ‘The difference between dreams and reality is called action.’
‘Chamma Chamma’ to feature in Prakash Jha’s Fraud Saiyyan
5 Sizzling Desi Dance Moves of Sapna Choudhary