The Merchants of Bollywood is a Dance Extravaganza

The Peacock Theatre played host to the West-End extravaganza, The Merchants of Bollywood, which returns to London after a successful run worldwide.

Paying homage to the true spirit of Hindi cinema, the globally acclaimed stage-production, The Merchants of Bollywood, was showcased at London’s Peacock Theatre on May 31, 2016.

The high-octane production received raving reviews and positive audience response when it first premiered in Australia during 2005.

Subsequently, the extravaganza has been performed more than 1,000 shows globally, including New Zealand, Zurich and Berlin. The third tour in London took place in May and July 2011, as they have been performed around the UK since 2006.

The Merchants of Bollywood is about the Merchant family who maintain the ancient dance form of Kathak. Shantilal (played by Denzil Smith) a choreographer during the 1950s- 1960s, is worried that the tradition passed down by the family may die out soon.

As such, his granddaughter Ayesha (played by Carol Furtado) is adamant to become a star and goes to Mumbai to work in Bollywood. 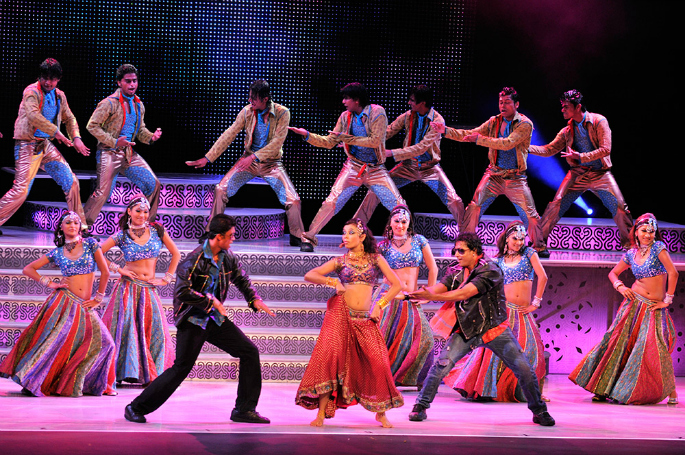 Here she meets the commercial film director, Tony Bakshi (played by Arif Zakaria) and realises the hollowness of the formulaic nature of film-making in modern times. Even after reaching the peak of her career, Ayesha sense that something is amiss.

Director, Toby Gough explains that the main inspiration of making The Merchants of Bollywood was after meeting ace Bollywood choreographer Vaibhavi Merchant’s conflict with her grandfather Shri Hiralal, who believed that ‘films were no place for decent women’.

One must certainly applaud Gough’s direction. A highlight of this is during a tough-tracking scene when Ayesha (Carol) knows that she has to return home to Rajasthan. Carol stands on the side and remembers Shantilal giving her a signed photo of Mithun Chakraborty.

She speaks to the audience, while another actress behind a black chiffon-style screen was miming the dialogues. Tension is developed by the exchange of dialogues between the grandfather and granddaughter until Ayesha yells: “The bells around my feet are like chains.” An excellent theatrical moment! 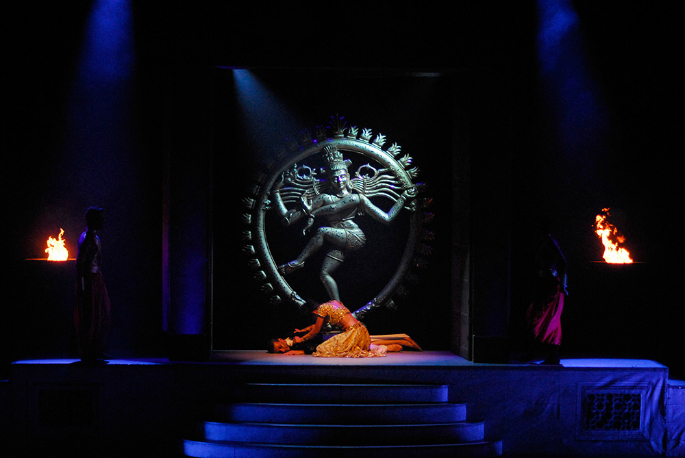 Also during another thought-tracking scene, the audiences see masala film director Tony Bakshi debating with Shantilal about the modernisation of Hindi cinema.

Carol Furtado delights as Ayesha. From her facial expressions and her emotional dialogue delivery, she has moulded naturally into Ayesha’s character.

With regards to her experience of touring for the fifth time, and the different stage and venue experiences, she mentions:

“It’s just part and parcel of every performance. You just need to breathe and take it all in. There’s so much that’s going on stage, plus different audiences, different venues. You just have to do what you do best.”

When meeting the show’s choreographer, Vaibhavi, she laughed: “She’s a tough-task master! To her surprise, she discovered that I can dance and I have lines. The person who was performing as Ayesha before had a different kind of experience, so my routines got tougher!”

Carol’s dance performances during the Tandav segments were equally spellbinding. 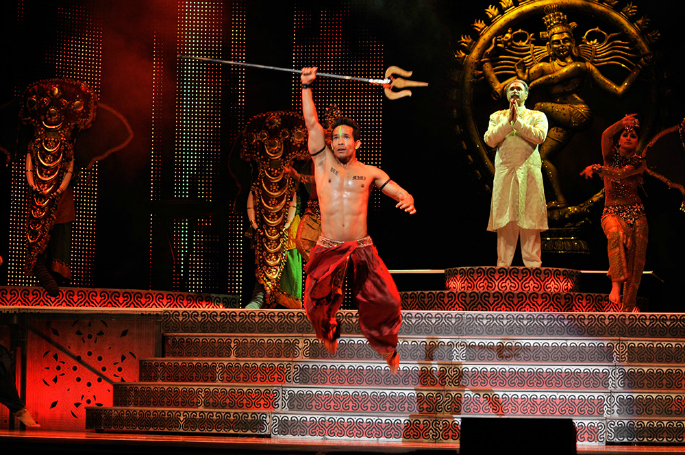 Denzil Smith, returns as Shantilal – the strict and traditional grandfather. His body-language, facial expressions remained consistent. Plus, his strong-dialogue delivery was strong. From his White Sherwani and red tika, one is reminded of Amitabh’s Narayan Shankar from Mohabbatein.

Talking about the global approach of Hindi cinema, Denzil said: “Everything is right in its own place in time. So that (classical-dancing) was right for the 40s to 60s. That was another style altogether and it slowly has evolved.”

We have seen Denzil in several Bollywood projects such as The Lunchbox, Bombay Velvet and Phantom.

Arif Zakaria has toured with The Merchants of Bollywood since 2005. He essayed the role of the narrator and the quirky commercial director, Tony Bakshi.

From his quiff hairstyle to his hilarious one-liners to the poetic dialogue delivery as the narrator, Arif balances both roles very well. He is definitely one of the strongest actors in the production.

One also remembers Arif in Karan Johar’s My Name Is Khan as Dr. Faisal Rehman and in Vikram Bhatt’s Haunted (to name a few). 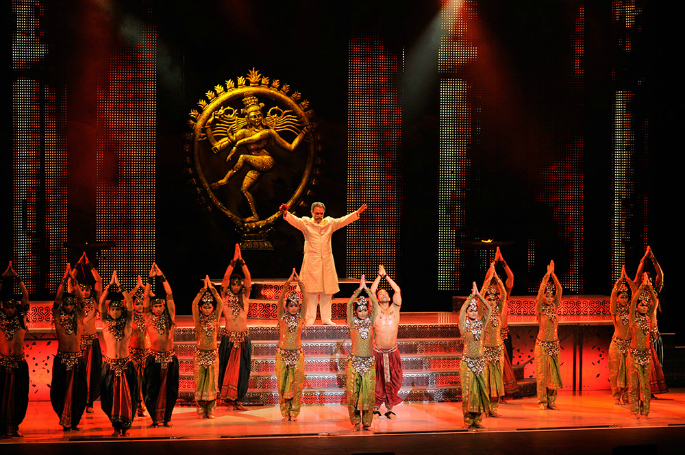 The newest addition to the production is Sushant Pujari, who depicts the role of Uday, Aysha’s childhood sweetheart. Sushant’s performance was pleasing. He was like the silent character who witnessed Ayesha’s tough journey from classical to cameras. When it came to the dance routines, Sushant was high on energy and executed each move with gusto.

Talking about his experience, Sushant says: “Because I was a background dancer, I have always dreamt of coming to Central London and being the main performer.”

As such, he also discussed the lessons he has learned since his journey from working in Remo D’Souza’s ABCD to The Merchants of Bollywood:

“Here, you connect directly with people. On shoots you can get second takes but on the stage, you don’t get that. I prefer live shows than shooting because I’ve always loved dancing.”

As well as the acting, the evening encompassed several startling dance performances to Bollywood chartbusters.

Tracks such as ‘Kajra Re’, ‘Thug Le’, ‘Mashallah’ and ‘It’s The Time To Disco’ were included. Plus, Salim-Sulaiman’s background score enhanced the atmosphere. Their composition of the Garba ‘O Rang Rasiya’ was outstanding, not to mention Vaibhavi’s choreography was equally dazzling.

The Bollywood spectacular has also received delirious from The Telegraph, which established that even, ‘the packed house was actually dancing in the aisles, and awarded it three stars. But that’s not all.

The Guardian compared the show to a ‘kick of chilli’ whose ‘dance numbers overpower with their energy, hot rhythms and kaleidoscope of eye-scorching costumes’.

Overall, this glitzy Bollywood production shines once again. The challenge here is for the audience to stay seated until the end, because we guarantee that you’ll want to shake a leg throughout!

The production is being shown at The Peacock’s theatre in London until June 11, 2016. For more details about The Merchants of Bollywood, please visit the Sadler’s Wells website here.