Suhana Khan and Shanaya Kapoor attended the launch of Atlantis The Royal in Palm Jumeirah. They met Kendall Jenner during the afterparty.

Suhana Khan and Shanaya Kapoor recently attended a party in Dubai which also had model Kendall Jenner in attendance.

It was a launch part of a luxury hotel in Palm Jumeirah.

Shanaya took to her Instagram Stories to share a series of pictures with Suhana from the evening.

She also shared a picture of them posing with Kendall at the party.

Kendall was in an olive-green dress which she paired with latex gloves and knee-length boots.

She wore a Victoria Beckham dress, which was introduced as a part of the designer’s Spring Summer 23 collection at Paris Fashion Week in 2022.

Among all the events held at the venue, Kendall Jenner’s 818 Tequila brand was also launched.

Shanaya also shared a glimpse of Kendall chatting with other guests.

She captioned the picture: “fun” with smiling emojis on her Instagram Stories.

Further, Shanaya also shared several solo pictures of herself from the bash. 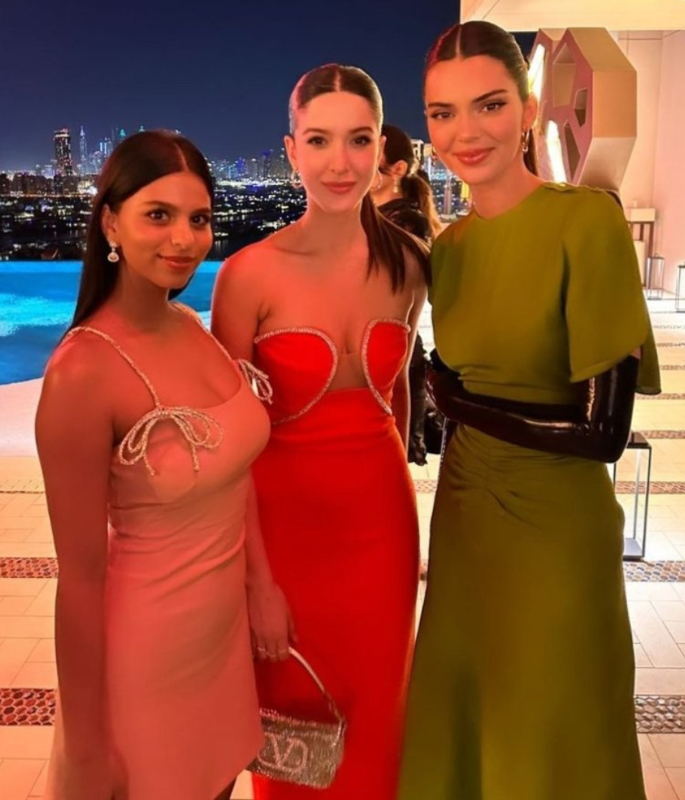 She wrote on her Instagram Stories: “I spot my girl.”

Shanaya is set to make her acting debut with Karan Johar’s production, Bedhadak.

The film is to be directed by Shashank Khaitan who also directed Shanaya’s cousin Janhvi Kapoor’s debut film Dhadak.

Earlier, the film was rumoured to have been shelved as the film did not go on floors for several months after the announcement.

However, in July 2022, Karan Johar denied the rumours and said it will go on the floors in the first half of 2023.

On the other hand, Suhana has wrapped the shooting of her film, The Archies.

The film will release on Netflix in 2023.

According to reports, Suhana Khan will be seen playing the role of Veronica in the film.

Aarthi is an International Development student and journalist. She likes to write, read books, watch movies, travel, and click pictures. Her motto is, “Be the change you wish to see in the world
Is Nimrit Kaur Ahluwalia to star in ‘Love Sex Aur Dhokha 2’?
Tamannaah Bhatia joins the cast of Rajinikanth’s ‘Jailer’