Shehnaaz Gill made her catwalk debut at Times Fashion Week and she looked gorgeous in a red bridal lehenga.

Shehnaaz Gill made her catwalk debut and looked stunning in bridalwear.

The popular actress made her debut at Ahmedabad Times Fashion Week and was a showstopper as she walked the ramp for designer Samant Chauhan.

Shehnaaz looked like a beautiful Indian bride as she wore a traditional red lehenga that was adorned with gold embroidery.

She exuded regal grace as she accessorised her look with standout rings, bracelets and earrings. 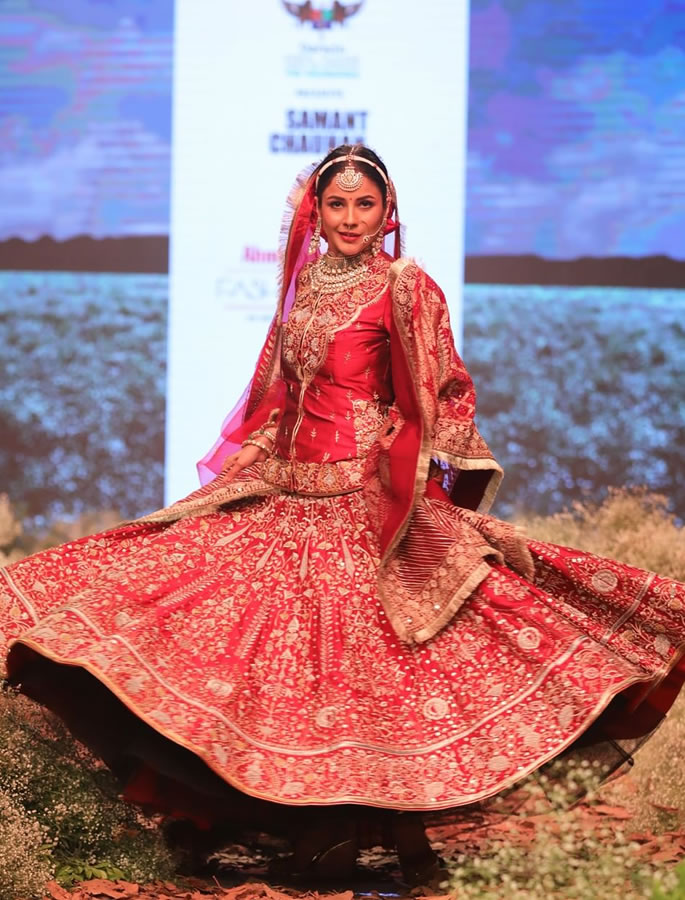 Her hair was styled by Baljit Cheema while Vardan Nayak made sure Shehnaaz’s makeup was fitting for a bride as her radiant glow and red lipstick stood out.

Despite the event being Shehnaaz’s ramp debut, the actress was a natural, walking the ramp gracefully to a chorus of cheers.

She posed for the cameras before walking back up the ramp.

But her showcase continued as she gave a twirl and covered her face with her hands while the late Sidhu Moose Wala’s ‘Sohne Lagde’ played in the background. 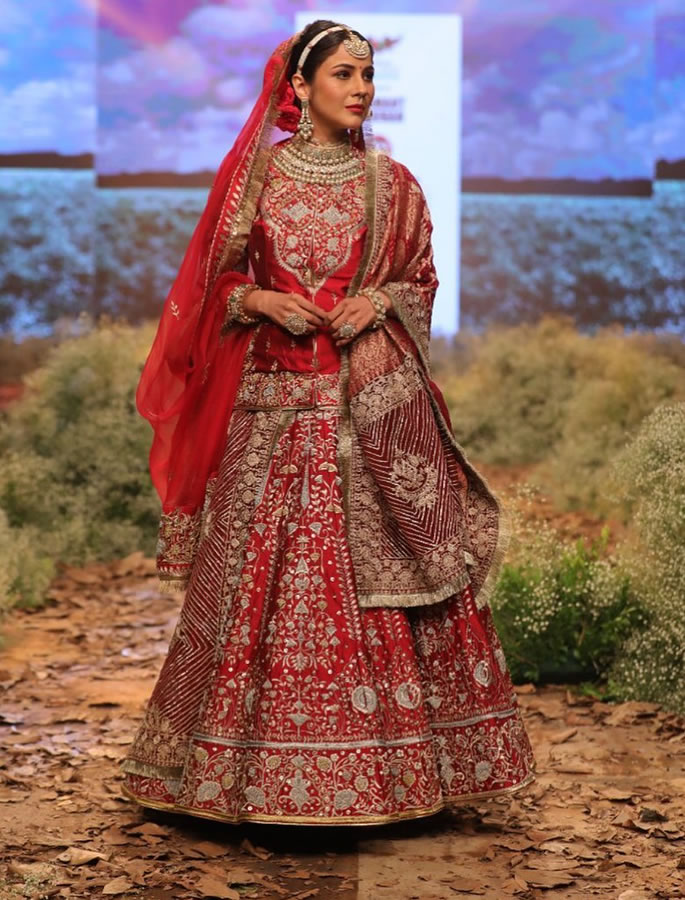 She then posed with the other models representing Samant Chauhan.

Shehnaaz later returned to the ramp with Samant where her charm was on full display as she broke out into dance.

Shehnaaz posted a video of the occasion and wrote:

“Thank you people of Ahmedabad for making us extra special for me!

“Your hospitality and love is immeasurable #ShowStopper #ShehnaazGill.”

Shehnaaz also thanked her team for their efforts. 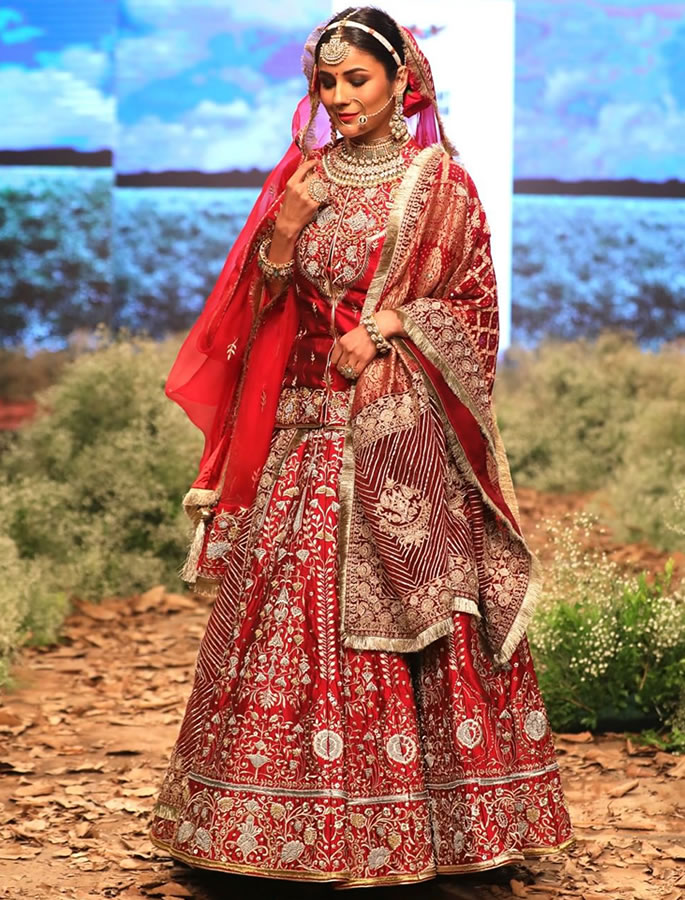 One person wrote: “Looked fabulous in your debut. A gorgeous bride.”

Another said: “Wow is an understatement.” 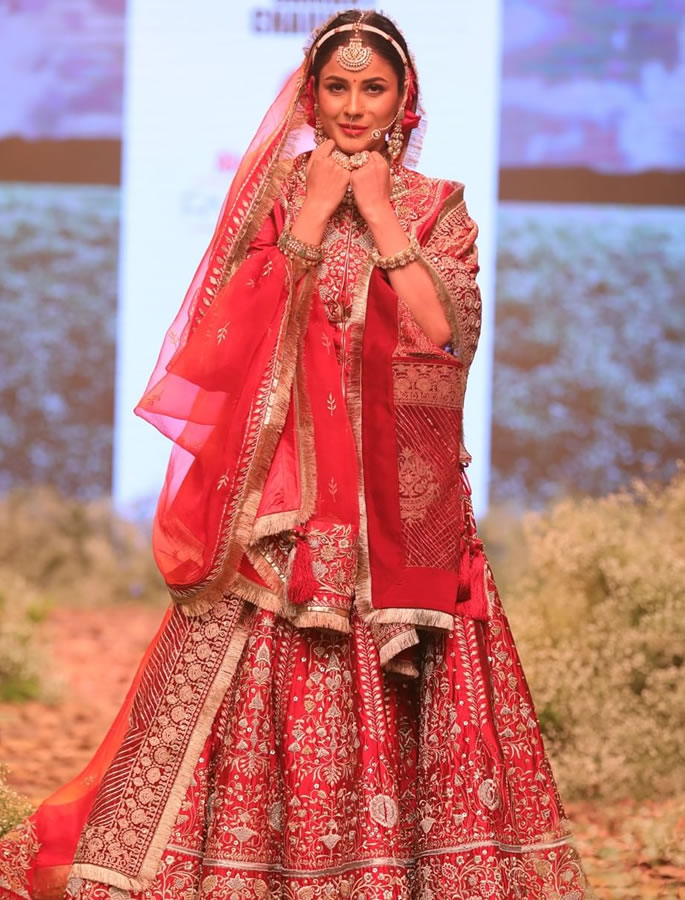 Others pointed out Shehnaaz’s tribute to the late Sidhu Moose Wala.

Another wrote: “Look at every one clapping and shouting behind.”

Shehnaaz oozed elegance as she walked the ramp.

For sometime, it has been reported that she will star in Salman Khan’s Kabhi Eid Kabhi Diwali.

A source had said Shehnaaz joined the cast after Salman approached her himself to be a part of the film.

Her apparent look from the film was later leaked and now it seems her role has been confirmed.

Dhiren is a journalism graduate with a passion for gaming, watching films and sports. He also enjoys cooking from time to time. His motto is to “Live life one day at a time.”
Hina Khan stuns in Black Ruffle Gown
Pooja Hegde turns heads in Venetian Corset & Slit-Cut Skirt