Shanaya Kapoor is set to make her Bollywood debut but now it looks as though she has unveiled the title of her project on Instagram.

She took to her Instagram and posted a Story

Shanaya Kapoor has apparently revealed the title of her Bollywood debut.

Karan Johar introduced Shanaya as the latest addition to his Dharma Cornerstone Agency.

The filmmaker had taken to Instagram to announce the news in March 2021, posting:

“It’s going to be an unforgettable and exciting journey that begins with your first film with @DharmaMovies, this July.”

Karan had also shared a video of Shanaya posing in different outfits. The caption read:

“Another beautiful addition to our growing @dcatalent family!

“Welcome to the #DCASquad, @shanayakapoor02. Her enthusiasm, perseverance, and diligence are so amazing to see.

“Join us in showering your love & blessings as she begins her first film with @DharmaMovies, this July! Watch this space for film details!!!”

Shanaya confirmed that filming would get underway in July 2021, adding that she was excited.

She had said: “Woke up today with the most grateful heart!

“Here’s to a great journey ahead with the @dcatalent family.

“Excited to kickstart my FIRST FILM (ahhh!!) this July by @dharmamovies, can’t wait for you all to see what we’re up to! Stay tuned! #DCASquad.”

Her parents, Sanjay Kapoor and Maheep Kapoor, were among the first to send a message of congratulations.

“With her unabashed enthusiasm, resilience and sparkle – My daughter is all set to take over your screens soon.

“Give her your love and blessings as she is ready to start the journey of her FIRST FILM with Dharma Movies this July.

“Watch out for the announcement of the film! #DCASquad.”

Shanaya Kapoor has now seemingly unveiled the title of her film.

She took to her Instagram and posted a Story, revealing the title Majnu. It also revealed that it will be directed by Shashank Khaitan. 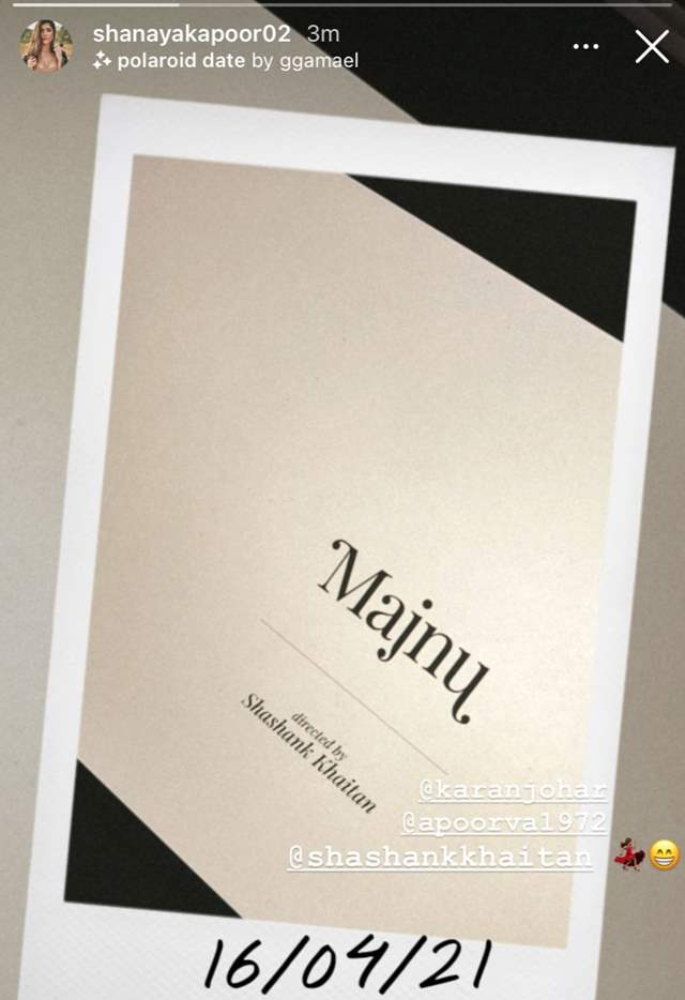 It is reported that the film is a romantic comedy and her character will be romancing Gurfateh Pirzada and Lakshya Lalwani, two other DCA talents.

The film is reportedly a love triangle story and filming will get underway in July 2021.

More details on Shanaya’s debut will be revealed when filming starts.

Shanaya actively posts on Instagram, whether it be stunning shots of herself or candid moments with family members.

She previously shared a video of her brother Jahaan.

In the clip, she was seen lying on a bed next to her brother, who appears to not notice.

As she moves the camera closer, he finally notices and shies away from the camera. Shanaya captioned the video:

Dhiren is a journalism graduate with a passion for gaming, watching films and sports. He also enjoys cooking from time to time. His motto is to “Live life one day at a time.”
Arjun Kapoor hits back at Troll over Donation Call
Kangana slams Karan Johar after ‘Dostana 2’ Statement