Arjun Kapoor hits back at Troll over Donation Call

Bollywood actor Arjun Kapoor has responded to a troll who called him out for asking for donations to help save a young boy’s life.

"your one day earning could save him right away!”

Arjun Kapoor is an active social media user and is no stranger to responding to trolls.

Now, he has responded to another social media user who questioned his recent donation call on Instagram.

Kapoor recently shared a post to his Instagram calling for donations for a young boy suffering from a life-threatening disease.

The post calls for donations for Ayaansh Gupta, who is suffering from the genetic disease Spinal Muscular Atrophy.

“A request for everyone to do as much as they can to help the little boy!

Arjun Kapoor’s post received mixed responses. One user praised him for his bid to help the child. He said:

“Heartening to see your support for the noble cause… thank you so much.”

However, others slammed the actor for calling on people to donate to the cause, saying he has enough money to pay for Ayaansh Gupta’s treatmet himself.

One user said: “Well, your one day earning could save him right away!” 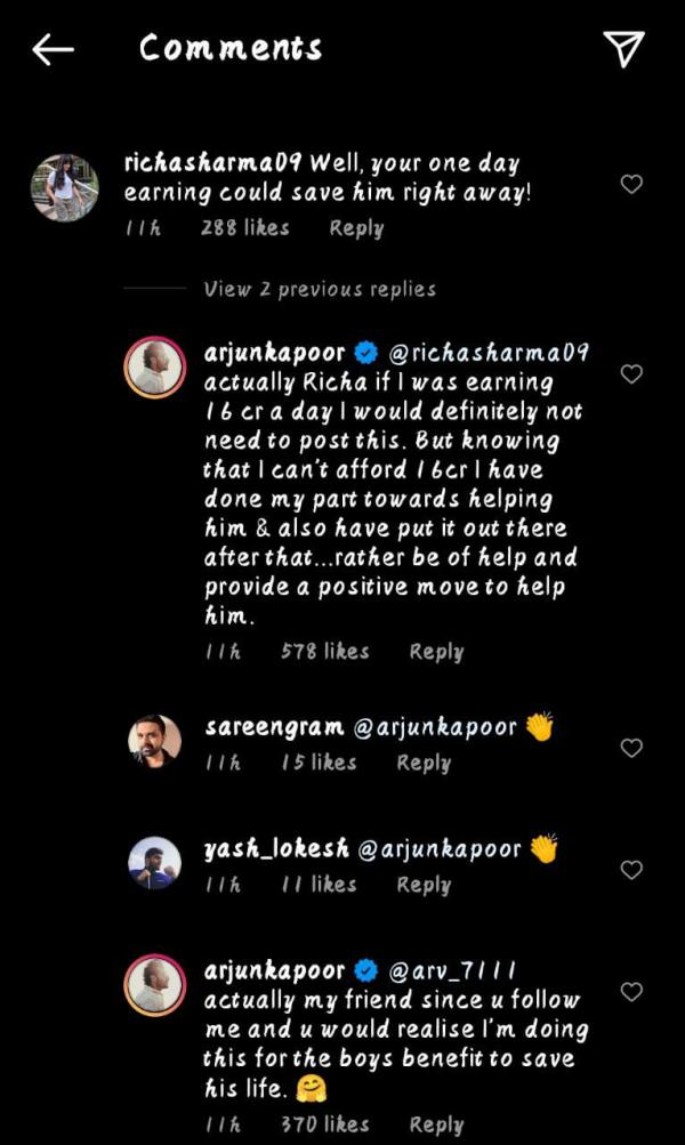 Arjun Kapoor gave a straightforward and dignified response to the user and said:

“Actually Richa if I was earning 16 cr (£1.5 million) a day I would definitely not need to post this.

“Rather be of help and provide a positive move to help him.”

Kapoor is also working on a cross-border love story with Rakul Preet Singh and John Abraham. The film is yet to be titled.

However, Kapoor has also made headlines after his girlfriend Malaika Arora sparked engagement rumours.

Arora posted a picture to her Instagram with a large ring to promote a jewellery brand.

However, fans filled the comments section with questions about their relationship.

Many Instagram users called for Arjun Kapoor to pop the question, while others coaxed him to buy Arora the ring she flaunted in the post.

A few even sent congratulatory messages to the pair.

Arjun Kapoor and Malaika Arora have been in a relationship for a number of years.

Despite Arora’s promotional Instagram post, fans are now wondering if the pair have already gotten engaged, or are set to in the near future.