"Only film that is worth waiting for."

Leaked pictures from Brahmastra have confirmed that Shah Rukh Khan will be in the film.

The big-budget fantasy film starring Ranbir Kapoor and Alia Bhatt is set to release on September 9, 2022.

But now, leaked photos from the film has confirmed that SRK will be in the film.

One picture shows Shah Rukh covered in blood and on his knees emitting a golden aura.

Another leak shows the actor standing in the sky with his golden ape aura behind him.

The leaks have now seemingly confirmed that SRK will be playing the ‘Vanara Astra’.

The pictures went viral and many have speculated that the images are from an upcoming trailer that is reportedly set to release on August 15. 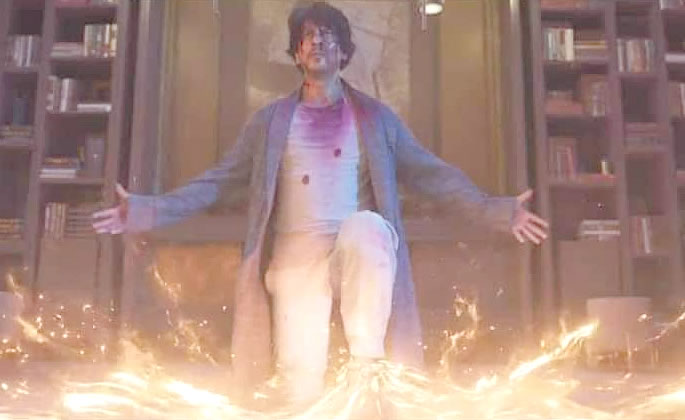 However, the filmmakers have not made an official announcement on the matter.

Some were excited that Shah Rukh was going to be in the film.

One said: “Now so excited to watch Brahmastra, SRK as Vanara Astra.”

Another declared: “So it’s confirmed.”

A third commented: “Shah Rukh Khan with his signature pose from Brahmastra.

“Only film that is worth waiting for.”

But some were unhappy with the leaks and urged social media users to stop posting the pictures.

One person said: “You guys don’t have any respect do you?

Another commented: “Guys, be kind and delete the pic of Shah Rukh Khan’s cameo in Brahmastra. Let’s appreciate their work.”

“Nothing is safe on social media nowadays.”

Lead actor Ranbir plays Shiva, who goes on to become the Agni Astra in the first part of the fantasy trilogy.

The film marks the first time that husband-wife duo Ranbir and Alia will share the screen.

His debut directorial Wake Up Sid, released in 2009, also featured the Rockstar actor in the lead along with Konkona Sen Sharma.

Dhiren is a journalism graduate with a passion for gaming, watching films and sports. He also enjoys cooking from time to time. His motto is to “Live life one day at a time.”
How did the Kapoor Family celebrate Raksha Bandhan?
‘Laal Singh Chaddha’ opening a Shock for Bollywood?