Samsung is thought to be first in line to introduce a foldable smartphone. Dubbed unofficially as the Samsung Galaxy X, it could cost up to $2,000 (£1,506).

The Galaxy X will feature a 7.3-inch OLED display. Once folded, the device will reduce to just 4.5 inches.

The Samsung Galaxy X (not it’s official name) has long been rumoured to be the first foldable smartphone. Now sources suggest the smartphone will begin its production in November 2018 and be unveiled at the beginning of 2019.

Samsung filed for a trademark on the name ‘Galaxy X’ back in 2017. This is why many believe that this will be the name of the new foldable phone.

According to The Korea Times, Samsung confirmed that it was currently in the process of developing a foldable smartphone at an earnings conference.

Head of research at Golden Bridge Investments, Kim Jang-yeol, predicts that the Samsung Galaxy X will be setting buyers back thousands. The Galaxy X is predicted to cost $1,850 (£1,393.35) without subsidies from carriers once it becomes available on the market.

This is considerably more than the already expensive iPhone X which launched at $1,149 (£865.38). After spending that much money on a phone, you would expect it to be something rather special.

Park Hyung-woo gave a more in-depth description of the outward appearance and overall design of the foldable phone. He said:

According to MSN, Park Hyung-woo, an analyst at Shinhan Financial, believes that mass production of the smartphone will begin in November 2018. This will be followed by a launch at the start of 2019. 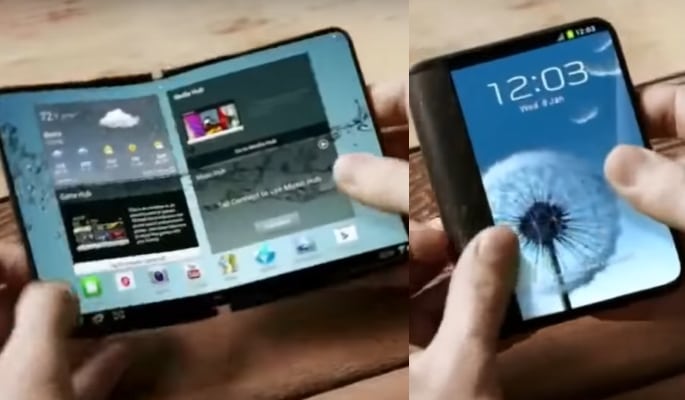 Hyung-woo also spoke about when the phone could be expected to launch. He added:

“Parts affiliates and first-tier subcontractors will begin supplying parts to Samsung Electronics’ handset division beginning in November, at the earliest, with the company assembling the phone aiming for a launch next year.”

It is thought that the phone will be officially unveiled at the Mobile World Congress (MWC) in 2019. This is the world’s largest exhibition for the mobile industry. MWC 2019 will be taking place at the end of February.

“In a world where Android backers are doing all they can to stand out from the crowd, the reason top-tier smartphone firms are jumping into the market is because foldable designs are different and allow customers to use them one-handed, while also providing a larger high-resolution display when multitasking is desired.”

Pocket-link has added that Samsung may only release a limited quantity of the Galaxy X models so they can gauge the market reaction before producing too many. It is thought that somewhere between 300,000 to 500,000 Galaxy X’s will be made, to begin with.

However, it seems that Samsung is more concerned with creating a world-first. They are focused on being the first to make a foldable smartphone rather than thinking about how it sells.

If Samsung can pull off a quality mobile product that is both foldable and successful, it is expected that other smartphone manufacturers will attempt to create their own foldable smartphone.

This includes manufacturers such as Oppo, Huawei, and LG. They will be keen to follow any potential success that Samsung might have with their Galaxy X model.

There are many rumours surrounding the foldable smartphone. However, it’s worth bearing in mind that very little is actually known about the device.

Rumours have been circulating about the Galaxy X for a few years and it seems they are not slowing down anytime soon.

Karun Chandhok talks F1 and Passion for Racing
Oppo Find X: Everything you need to know