Salman Khan and his Showcase of Stunts

The S factor; Salman, stylish, sexy, and stunts go hand in hand. DESIblitz bring to you the best Salman Khan stunts from his best action films to date.

Salman has always been a stylish stunt hero.

Our beloved Bhai of Bollywood, Salman Khan has acted in more than 20 action films to date. He stuns everyone with his stunts.

He has a signature action style and a Bhai film is incomplete without a climax in the film where he takes his shirt off. Not just the girls but even the boys can’t take their eyes off Salman Khan.

DESIblitz counts down our favourite Bhai stunts from his films over the years.

Dabangg did wonders for Salman Khan as Chulbul Pandey. He was back in action, literally and the movie was one of the biggest blockbusters of Bollywood till date.

Remember how Salman naturally lifts the villain and scares him in front of the speeding train? In the same film Salman, artfully plays with his signature styled Ray-Ban sunglasses before punching the goon so hard, that he flies and crashes onto a car. How Salman-ish is that?

Wanted is considered as the high point in Salman’s successful career as a superstar. Wanted was a one of a kind masala-action film and the stunts performed by Salman in this film reintroduced his charisma, his action-hero image.

Salman Khan fans asked for more and thus Salman was reborn as the action hero of Bollywood.

In a scene from Wanted, Sallu is circled around by goons and he single-handedly (actually double-handedly) kills the villains. 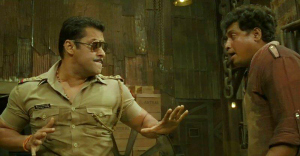 Everybody was waiting for a Dabangg ‘part 2’ and Salman as Chulbul Pandey amused his fans yet again. This time however Salman couldn’t perform any high end action scenes and had to take the help of a body double.

The actor was undergoing a treatment for trigeminal neuralgia, a facial nerve disorder and had been warned by the doctors to take immense precautions. Salman, who listens only to his heart, of course didn’t listen to his doctors and did some smashing stunts for the film anyway.

In Dabangg 2, Salman easily kicks and shatters the table and fashionably kills the goons.

The main reasons why Bodyguard was again a blockbuster hit for Salman was that it had very modish action sequences, exceptional stunts and highly memorable dialogues.

The film had a lot of action and punches in the movie, plus the classic filmy dialogue: “Mujh par ek ehsaan karna, ki mujh par koi ehsaan na karna.”

In the climax fight scene, Salman shows off his ‘to-die-for’ physique, does acrobatics in water and batters the villain to a pulp.

Despite being warned by the doctors to stay away from heavy duty fighting, for bad boy Salman, his fans’ love for him and his action scenes always come first.

While filming Ek Tha Tiger, Salman underwent special Parkour training for a month and performed terrific action and free run sequences in the film. The audience was overwhelmed to see their Bhai back in action.

In the climax scene the super amazing Salman flies like a superman and catches a flight! It seems Bhai certainly doesn’t like missing his flight! In the same film we see Sallu doing Parkour and flying like a super hero from one building to another.

Salman’s health problems were identified when he was in agony while shooting for Veer. He was under heavy medication to numb the pain and finally went into hospital for surgery.

However that didn’t stop the Veer Salman going out of his way to get training in the art of sword fighting and horse riding, as well as learn the body language and the manner in which the warriors fought.

The action sequences in Veer were quite impressive and larger than life with hundreds of fighters, and thousands of horses, elephants and camels. The Veer climax scene shows Salman in the warrior avatar fighting with a strong built combatant.

His other action films had set an outline for his action scenes and his style, and so for Jai Ho Salman bhai went real with all the stunts. In Jai Ho, Salman tactfully uses his bike to fight off the villain. 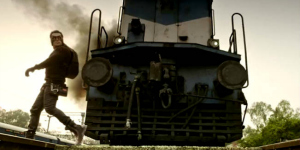 The stunts and action of Kick are said to be shot in humungous style and with a hefty budget. For the first time in Bollywood, drones have been used to shoot action sequences.

Not just that, to shoot Kick’s action sequences, 57 cars, 13 buses and a helicopter were blown up. Our personal favourite is Salman walking effortlessly in front of the speeding train.

Salman has always been a stylish stunt hero. Not one to shy away from the grittier side of life, fans adore his incredible stuntbazzi. We hope to see many more Salman action films in the future.

Komal is a cinéaste, who believes she was born to love films. Apart from working as assistant Director in Bollywood, she finds herself doing photography or watching Simpsons. “All I have in life is my imagination and I love it that way!”
London Indian Film Festival 2014 Closing Night
Katrina throws Starry Tantrums in London