DESIblitz spoke with Riya Sharma, founder of ‘Wall Street Confessions’. A page that reveals the turbulent truths of working in finance.

22-year-old Riya Sharma is the founder of the popular Instagram page ‘Wall Street Confessions’ which gives audiences a real and honest insight into the life of finance.

Having launched the page in January 2019, when she was 19, Riya, also known as Ri, wanted to provide a safe haven for truthful and meaningful ‘confessions’ from the financial professionals of Wall Street.

Based in New York City, Wall Street is known for its tenacious environment, relentless hours and constant pressure.

However, these sacrifices are made bearable by Wall Street’s infamously high salaries and extraordinary bonuses.

Although this explains the materialistic luxuries stereotypically related to stockbrokers, analysts and traders, which many see on social media, it does not present the authentic state of Wall Street.

This is what Ri hopes to rectify with ‘Wall Street Confessions’. When the page first gained traction, women were the important factor in becoming the backbone of the page.

Whether it was ‘#MeToo’ incidents, sexual discrimination or general statements about equity, women slowly unravelled the turbulent incidents of working on Wall Street.

Having been the unfortunate victim of sexual assault when she was just 17 years old, the heart of Ri’s mission is very personal in illustrating how women are treated in such environments.

Ri’s intuitive yet strategic posts manage to capture these vivid confessions in a snappy manner. It makes it easy for audiences to digest the revelations quickly whilst lingering on their deeper meaning.

In addition, posts about investments and stock add an educational dynamic to the page, intriguing people to learn more about specific terminology and brushing up on their financial awareness.

As the page continues to grow, DESIblitz spoke exclusively with Ri about the origins of ‘Wall Street Confessions’, the issues within finance and her future endeavours.

Tell us about yourself 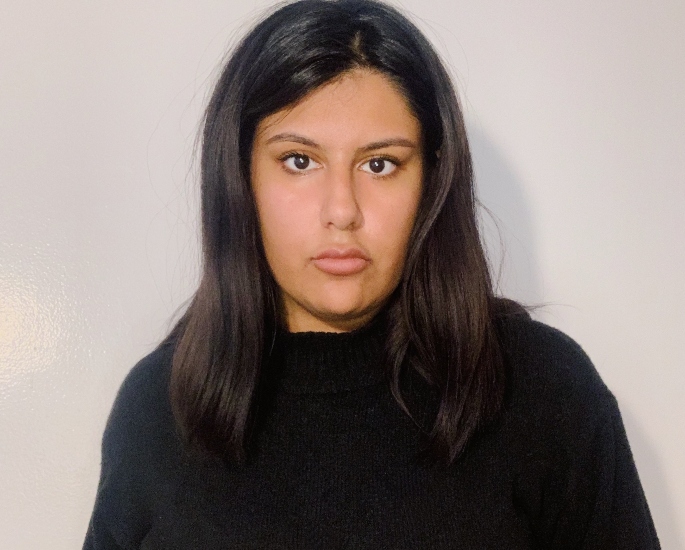 I was born and raised in New Jersey, spent part of high school in Southern California, and finally found my footing in New York.

I currently live on the Upper East Side and love it.

My parents are from India (Delhi, specifically), and I have two older brothers who I look up to a lot.

As far as education goes, I double majored in finance and international studies with a minor in arts management at Marymount Manhattan College, before dropping out to pursue entrepreneurial ventures.

I currently work full-time at StockTwits as a social media manager and work on ‘Wall Street Confessions’ as well.

When I was 16, I picked up the book Investment Banking for Dummies and thought it was the most interesting thing in the world.

I always told myself that I’d major in finance and work in banking.

One of my brothers also happens to work in finance, so growing up and seeing him in the industry contributed.

What motivated you to start ‘Wall Street Confessions’? 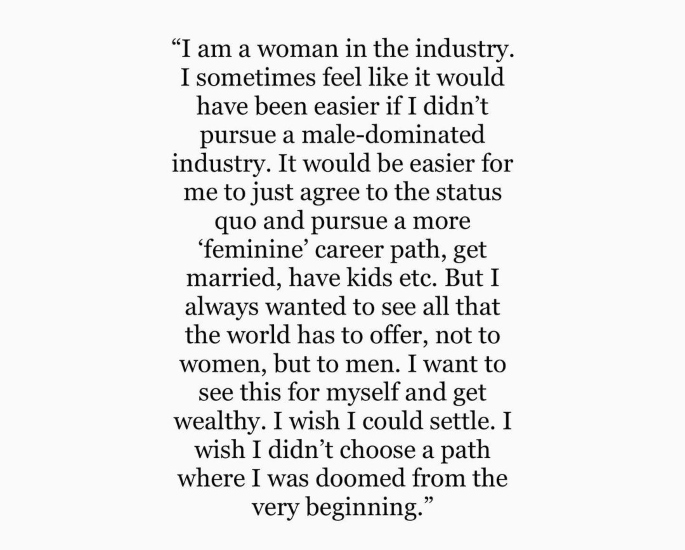 When I was in college, I was applying for every opportunity possible in the investment banking sphere, doing coffee chats, and tried my hardest to get ahead.

I’d gone as far as messaging executive assistants at Goldman Sachs asking for introductions. Nothing worked.

I was following popular Instagram pages as well and noticed that there was a lot of focus around ‘memes’ – Gucci loafers, Patagonia vests, etc.

I thought it was important to open up the conversation around the financial services industry and what really goes on.

What impact do you want the page to have?

I want people to talk about the things that matter and take action to do better.

If ‘Wall Street Confessions’ could make an impact, it would hopefully be towards gender inequity and mental health.

It’s important to make people think and consider how their day-to-day lives play into the stories being shared.

Impact comes out of action and action comes out of conversations… If someone reads something about a woman being mistreated and analyzes how they treat their female co-workers, I’d consider it a win.

You started the page anonymously but what influenced you to reveal your identity? 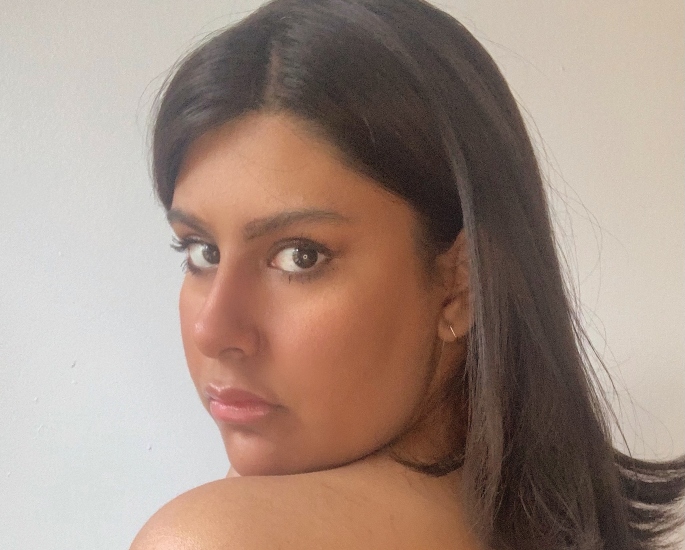 I wanted to humanise the brand. People send things in and say things to influencers often without really thinking of the impact that their words have.

It’s incredibly easy to say something to someone who you don’t know at all and see them as less of a person.

It’s always important to know that there are people with feelings and thoughts behind platforms, even if they’re anonymous.

What are your personal opinions of Wall Street/finance and the issues that need addressing?

It’s not just Wall Street, but corporate America has a long way to go as far as the treatment of women.

We deserve equality and to be treated better. There are layers to the conversation around equity.

I do think that people should pay more attention to mental health as well. It’s not sustainable for anyone to work 80-90 hours a week, and everyone should be more cognizant of burnout.

Have you faced any backlash from the page? 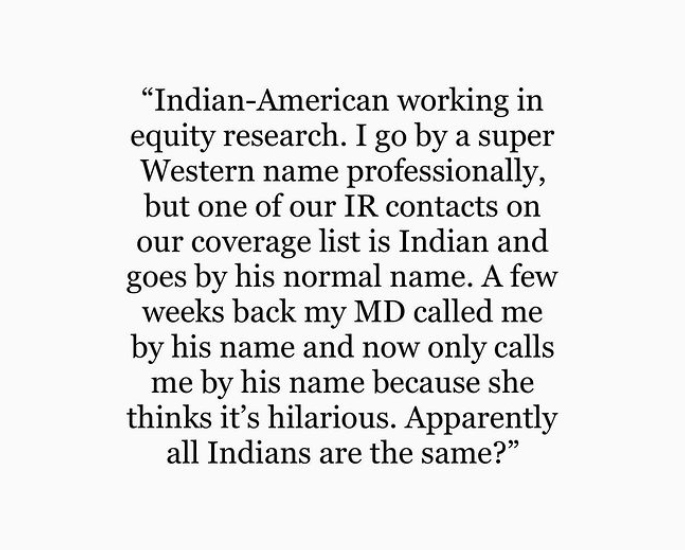 People say that stories are made up or that they aren’t important.

If anything, I take it as a sign to keep going and to keep posting. Aside from that, I’ve also been told that I should give it up and ‘get a real job’ or that I should stick to posting funny things.

I never really care for those comments. I have a job and continuing to lift the veil on deeply rooted cultural issues is important to me.

Have any high-ranking CEO’s ever ‘confessed’ or contacted you?

No. Rich Handler from Jefferies comments on quite a few of my posts, but aside from him, I haven’t had contact with CEOs.

I’d love to do something with Cathie Wood from Ark Invest, Sallie Krawcheck from Ellevest, or David Solomon from Goldman Sachs, though.

How would you describe the power of social media for social, financial, political issues? 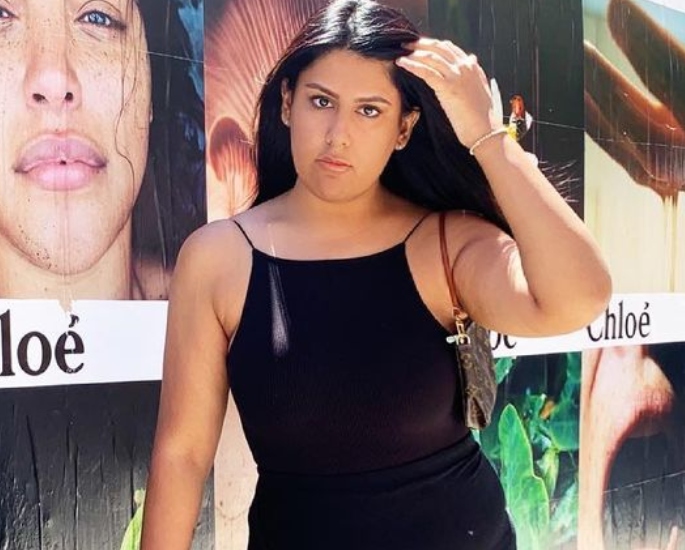 It’s where one person can speak to hundreds of millions of people and make a profound impact on important issues or with what they’re going through.

It is also where people can feel like they aren’t alone, no matter what’s going on with them.

When asked about facing any difficulties as an Indian woman in her areas of work on social media, Ri says:

I’m lucky enough to say I haven’t. I would also say I’m not in finance, though. Just parallel to the industry.

Starting the page at a young age, what have you learnt as the page and your experiences have grown? 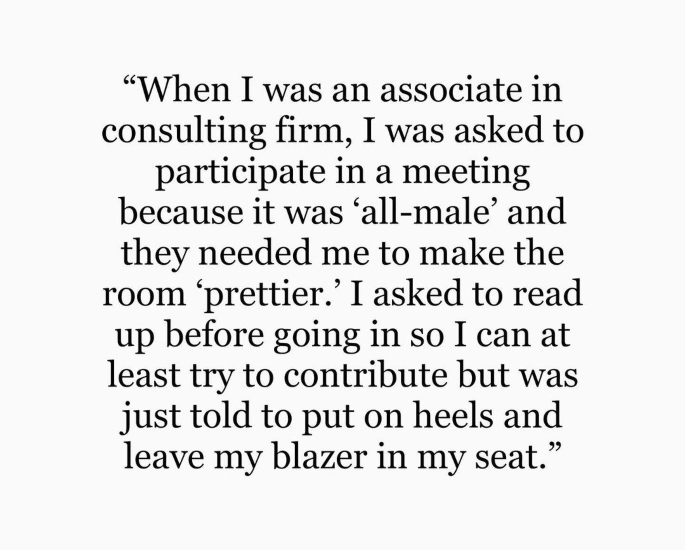 I’ve learned that women have a long way to go and that the conversation has to continue.

I’ve also learned that sometimes it’s smart to sit on things before talking.  Overall, Wall Street Confessions has taught me many things and I’ve had the opportunity to meet great people.

Like my manager Brian Hanly (CEO of Bullish Studio, a creator incubator focused on opening up the conversation around finance), Alyson Denardo from Two Pink Suits (a strategic advisory firm for women-led and owned companies), and more.

Besides ‘Wall Street Confessions’, what are your ambitions?

Wall Street Confessions is my ambition outside of my day job (which I love.)

I’d say that I’m a bitcoin and ethereum maximalist and the cryptocurrency space is extremely exciting to me.

I’d love to be more involved with it and do something related… whether it’s NFTs or starting something like ‘crypto confessions.’ Who knows?

The astronomic growth of ‘Wall Street Confessions’ has catapulted the page past 120,000 followers and it is easy to see why.

As a social media manager for StockTwits, Ri continues to impressively engage users with the intimate confessions she posts. Maximising the interactivity of ‘Wall Street Confessions’ has led to her unparalleled triumphs.

With some dubbing the account as “Wall Street’s Gossip Girl”, the page does not restrict itself as merely a place to ‘confess’.

More so, it is a platform where Wall Street and other financial sectors are held accountable, even consisting of ‘confessions’ from people working in London.

The lack of action against things like misogynist, racist and homophonic comments is a daily occurrence in high-profile companies.

However, Ri’s goal to eradicate these comments by creating a space that demands uncomfortable conversations in order to change is remarkable.

Even top-ranking CEO’s such as Richard Handler, CEO of financial company Jefferies, have declared how they admire Ri’s:

“Entrepreneurialism, savvy and desire to positively influence the finance industry.”

Whilst still very young, she remains a catalyst for women embarking on their journey into finance, whilst also providing hope to established professionals.