Top Confessions of an IPL Cheerleader

An IPL cheerleader has confessed all in a no holds barred Reddit interview, citing experiences of exploitation, racism, and rat droppings. DESIblitz explores her top confessions.

"I hate the racism. Why is my team made up of 99 per cent white girls?"

An American cheerleader working in the Indian Premier League (IPL) broke her silence, and the cricketing status-quo, by revealing candid details of her experiences on a live discussion website.

With the intention of answering as freely as possible, she remained anonymous.

She notched up over 500 responses on Reddit’s Ask Me Anything (AMA) discussion site on Wednesday 6th May 2015.

DESIblitz discusses some of her biggest confessions about working as a cheerleader in the IPL:

“I hate the racism. Why is my team made up of 99 per cent white girls? Why do Indians feel it’s ok to dress white girls up in skimpy outfits but they won’t let their fellow Indian women do it?” 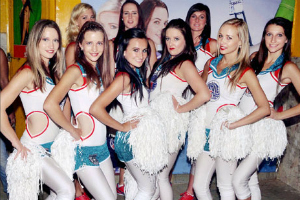 In recent seasons, there has been a growing trend for organisers to hire only white western women. Sadly, this reinforces Indian stereotypes about sex and the role of women in society.

In values inherited from the British Raj, the still-colonised Indian mind sees white as the highest status and most attractive.

“I’d honestly prefer to see at least a mix of Indian women.”

With the IPL having such a global appeal, there are rules for each cricket team to have a mixture of foreign and homegrown players.

It is a shame that this concept does not transfer over to the cheerleaders. Do Indian decision makers feel it is not the place of ‘good Indian women’ to be fulfilling such roles?

“The mass majority of cheerleaders I’ve worked with are perfectly respectable women. I’m currently not working with any sluts…They tend to cause drama.”

Of course, there does seem to be a perception, prevalent in the west just as in India, that cheerleaders are promiscuous.

This is why the anonymous cheerleader feels the need to defend the credibility of her fellow dancers.

Despite being in the 21st century, sexist stereotypes clearly persist. 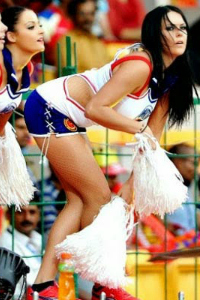 “The men in the crowd in India are much more intrusive. But you’ll find pigs wherever you go. I hate it. There’s just so many nasty men making kissy faces and taking my picture that I just tend to block it all out.”

The image of Indian male ‘cricket fans’ leering at white cheerleaders, separated by a fence which resembles a cage, is rather unsettling.

It looks rather more like a scene from a zoo than a cricket match.

If Indian men are ‘more intrusive’, does this form of entertainment not ‘add fuel to the fire’? Or is the IPL capitalising financially by ‘feeding the beast’?

“I am a feminist, and I admit that I am bothered…I went into this contract as a dancer, finding that I’m treated more as a sex object.”

“I also enjoy what I do regardless. But I wouldn’t renew this contract for another year unless things changed.”

Cheerleading is seen as a competitive form of dance and athleticism in western countries like the United States, where it originates.

In India, perceptions are wildly different and, with ‘item girls’ being a big export of Bollywood, the idea of cheerleading being professional art or an athletic pursuit might not wash with the masses.

Sadly the fact that she would not consider renewing her contract will not bother the organisers, as there will be an abundance of cheerleaders queuing up to take her place. 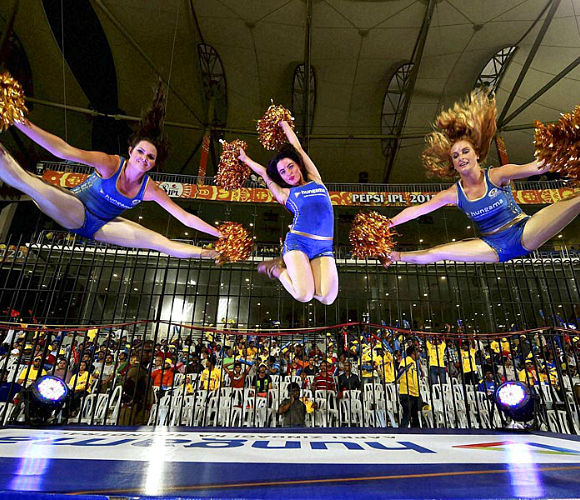 “This more for the experience than the money. [But] we quickly realised our manager had been skimping us and pocketing the money he was saving.”

Welcome to India! Your average Indian will probably be able to recount many similar stories.

While she admits that the salary is not great, and does it more for the experience, it does raise the issue of exploitation of women who have come from abroad.

It’s not like the managers will worry about being held to account by the cheerleader trade union, but it cements the kind of mistrust outsiders feel.

“The first 2 games they were more like 1 star hotels. I saw a rat and rat droppings, it was pretty bad.”

Given the millions that the IPL generates, how can contracted employees of the IPL community be given such low standards of accommodation?

If you cast your mind back to the state of the Athletes’ Village prior to the 2010 Delhi Commonwealth Games, then this story is not a surprise.

Asked if players hit on her: “No, they ignore us for the most part. We’re not allowed to talk to each other.”

In previous IPLs, there were rumours that cricketers were indulging in flings with cheerleaders at after-match parties, and that cheerleaders were being used as messengers for match-fixing.

But now the cheerleaders, juxtaposed between the crowd and the players, are not allowed to communicate with either. A wise and sensible move to segregate the IPL community by organisers?

The issues raised here by the IPL cheerleader are enlightening, but perhaps not so surprising.

The confessions cut deep into the insidious nature of gender, race, and sex in Indian society. But this insight into the IPL is only a scratch on the surface, from an insider on the peripheries of the game.

Why is Jose Mourinho Invincible?
Why did Kings XI Punjab finish Last in IPL 8?