This is easily the most commercial film of Vishal Bhardwaj

Rangoon has a lot of expectations attached to it.

Why? It’s the first time that Shahid Kapoor, Kangana Ranaut and Saif Ali Khan are featuring on-screen together.

Furthermore, there has not been a Bollywood film set against the backdrop of World War II.

To perform for the Indian Army, Julia is sent to Burma and is protected by Nawab Malik. After air strikes, both Malik and Julia must reach India, via Rangoon, in one piece.

Sounds impressive. But, how good is this period drama? DESIblitz reviews.

This angle is fresh for a film which revolves around the British Empire in India. As a writer (alongside Sabrina Dhawan and Matthew Robbins) and director, Vishal Bhardwaj gets almost everything perfect.

From characters to location settings, it is fascinating to see everything unfold on screen. This is easily the most commercial film of Vishal Bhardwaj.

In fact, the camera shots of a war scene at the beginning seem like a sequence from the video game, Call Of Duty. The camera travels with the protagonist, which gives the scene a visceral feel.

It is also quite interesting to see how objects and animals are symbolised in Bhardwaj’s films. For instance, in Omkara, the belly chain is emblematic of deceit.

In Matru Ki Bijlee Ka Mandola, the pink buffalo represents the temptation to consume. Here, it is a sword, which symbolises honour. When it comes to writing a good script, Vishal Bhardwaj never fails to impress.

As expected, the performances in Rangoon are superlative. To begin with, Kangana Ranaut is the show stealer. As Julia, her ‘Hunterwali’ avatar is allegedly depicted on Bollywood’s first stunt woman, Fearless Nadia. This role is extremely bold, beautiful and fiery.

What strikes us about this character is the fact that she is a strong-willed and successful working woman amidst a period of war and suppression.

No one could’ve played Julia’s role better than Kangana. Even during the action quotients, Ranaut leaves you breathless.

Shahid Kapoor’s performances for Bhardwaj movies have been tremendous. Once again, he wins your heart. Captain Nawab Malik is stylish and sexy in his own way. As an actor, he knows how to switch modes of being a soldier, to a lover.

Whether it’s playing the abstract Haider or the lisping Charlie in Kaminey, Kapoor can mould into any and every character, you’ll fall in love with Jamadar Malik. Shahid’s chemistry with Ranaut is sizzling. 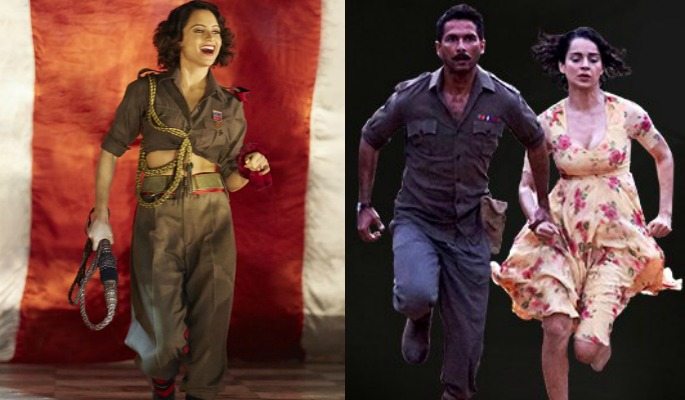 Langda Tyagi in Omkara was truly iconic. Saif Ali Khan portrays yet another murky character which compels you to love and dislike him at the same time. It’s iconic that in Omkara, Saif was limping, whilst in Rangoon, he has another major issue.

Rusi Billimoria’s demeanour is both cool and condescending at the same time, especially when he tells Julia: “Hey Kiddo. Come, come, come and sit on my lap.”

This is another fine performance of Khan.

Who really leaves a mark is British actor Richard McCabe as General David Hardings. Here, you see him reciting shayari, singing Indian classical and playing the harmonium. In this instance, you will laugh and appreciate the role.

But when we see shades of his dictatorship – a la his dialogue – “I’m white, I’m always right,” our blood boils. This character is very well-written and can be considered as an iconic antagonist in modern Bollywood.

Besides the stellar performances, Bhardwaj’s music is also brilliant and all tracks have a strong ’40s feel to them. Certainly, he has done a fine job with all the songs.

Our favourite songs include ‘Bloody Hell’, which has already become a sensation, with Sunidhi Chauhan’s distinct voice variations. The picturisation of this track is awesome. The choreography has been done by Norway-based Sudesh Adhana. His routine in ‘Bismil’ (from Haider) was fantastic, but for this, he goes notches higher.

Farah Khan’s choreography in ‘Tippa’ is also remarkable, plus, hats off to Gulzar saab for such poetic and metaphoric lyrics.

Executed on a moving train, like ‘Chaiyya Chaiyya’, Khan’s choreography highlights the fun side to Julia’s character. It reveals the young girl within Julia. It’s great to see Farah choreograph for an external film after a while. 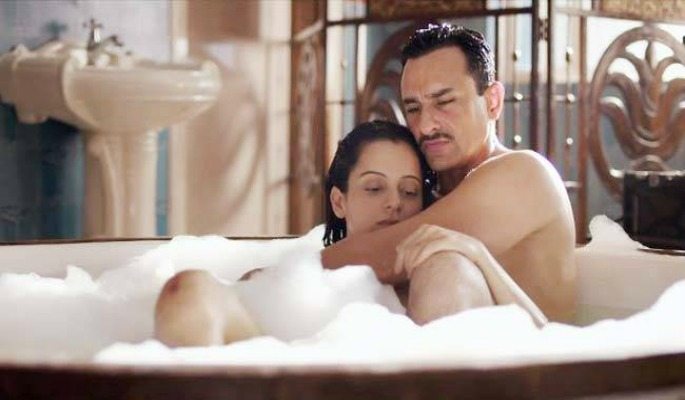 Remember the classic, ‘Mere Piya Gaye Rangoon?’ Well, the song has been adapted in this film as, ‘Mere Miyan Gaye England’. In which, Rekha Bhardwaj’s authentic voice adds a zing to this upbeat track.

Again, the picturisation of this song is on a grand scale and can easily be compared to a Bhansali number. You can’t get enough of this one.

A song which grabs your attention after the film is ‘Julia’, crooned by Vishal Bhardwaj, Sukhwinder Singh, KK and Kunal Ganjawala.

The tone is dramatic like ‘Chali Kahani’ (from Tamasha) and has nuances of ‘Look Down’ (from Les Miserables). It grows on the audience.

Any glitches? There are a few minor ones, especially the CGI of the moving train. It is clear that green screen has been used. Moreover, the ending is underwhelming after such a great build-up. This could have been much better!

On the whole, Rangoon intrigues you from the very first frame. The movie is not solely a romantic period drama, but it includes elements of comedy, suspense and action.

Therefore, the audience is bound to be entertained for the next two hours and thirty minutes. In addition, Shahid, Kangana and Saif’s performances will also sweep you off your feet. Definitely worth a watch!