Two brothers have turned a Birmingham street into a showcase for vintage cars, parking their motors on neighbours’ driveways.

"We've always been into cars."

Two car-obsessed brothers proudly display their fleet of vintage cars on a Birmingham street, having been inspired by the late Queen Elizabeth II.

Shoukat Ali and his brother Bugsy have around 100 cars including Rolls Royces, Bentleys, Porsches and a Nissan Skyline GTR.

They own a dozen properties on Washwood Heath Road in Ward End and store some of the vehicles around the front and back of the properties.

The brothers own so many cars that they ask tenants to sign a written contract allowing them to park a Bentley or Rolls Royce Phantom on driveways or at the back of homes.

They also ask neighbours to let them use their driveways for their vehicles.

They even took a neighbour out for a spin on his 80th birthday as a thank-you for letting them leave a limousine on his drive. 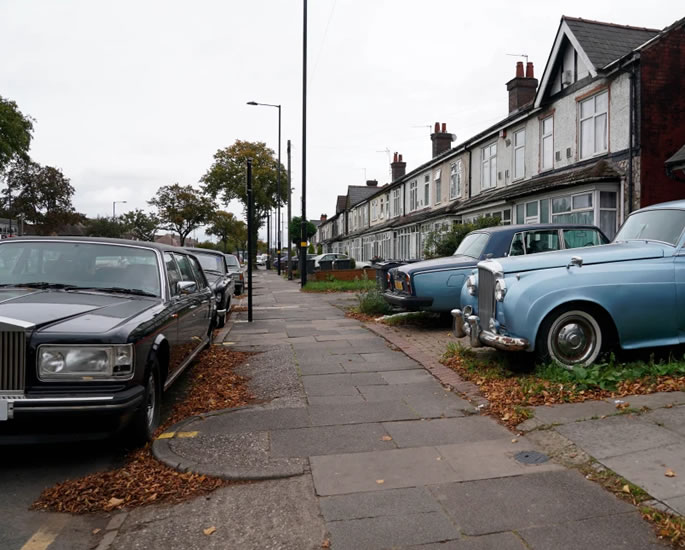 Bugsy said: “We’ve got 100 cars, we restore and sell classic cars at garages. We keep some of them on driveways outside.

“We own around a dozen houses on Washwood Heath Road and we’ve got a contract with some of the tenants to park a car on the driveway.

“We leave one space and they are happy. They are neighbours from heaven.

“I’ve got one neighbour called Fred and he’s an army veteran. On his 80th birthday, we took him and his missus out to the local pub in a Rolls Royce Limousine.

“He said it was the best birthday he had ever had. If they ask to move the car, we will.

“Even the local police are good to us and let us know when the car tax is up. Everyone knows us.”

Bugsy explained that their interest in vintage cars stems from childhood.

He continued: “We’ve always been into cars.

“When I was a kid my uncle used to take me out in his Mini 1275 GT and our neighbour on Washwood Heath Road was a funeral director who used to have a Rolls Royce Silver Shadow.

“He used to take me out in it when I was 10 years old. My uncles were car traders and we used to go to auctions when we were kids.

“After the 90s, my uncle got me into keeping a few cars here and there. Everybody copies someone. I’m not copying Tik-Tokers, I’m copying the Queen.

“I loved her style, the glamour and she rode in a Rolls Royce Phantom. I’ve got up to 20 Rolls Royces from the 1960s.

“My favourite is the Rolls Royce Corniche which I bought for £40,000 around two years ago. It’s elegant and beautiful. It’s got lambswool carpet throughout and you don’t get bumpers like that.

“The Rolls Royce Limousines are linked to a duke who was the Queen’s cousin but I am not sure. I bought it off a car collector.” 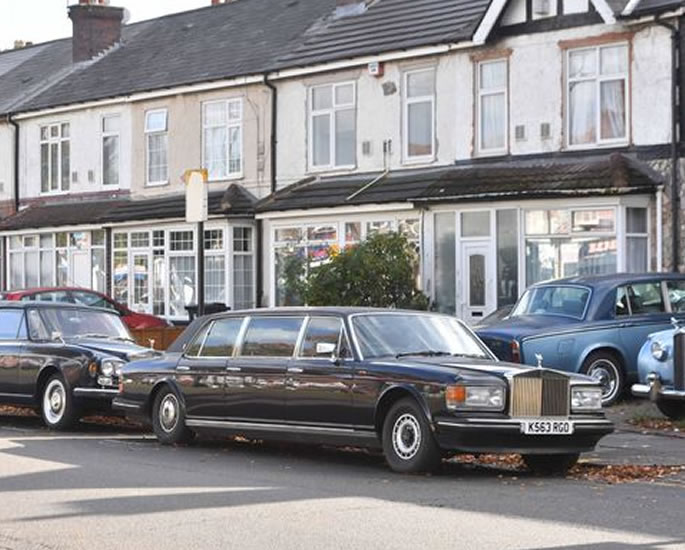 Admitting that he does not know how much the collection is worth, Bugsy said:

“Some of them are going to stay with me for life, others I will sell and then buy something on. I’ve got to make a living.”

“New cars are just plastic. Old cars are the best. If these were in a garage you would never see them.”

Although the vintage cars are in one of Birmingham’s most crime-ridden areas, Bugsy is not worried.

He said: “I’m not worried about them being stolen.

“This is my area. I’ve lived here all my life. I’ve had people from out of town try their luck but all the neighbours are watching out for me.

“It’s a close-knit community. People know not to mess with us.”

Dhiren is a journalism graduate with a passion for gaming, watching films and sports. He also enjoys cooking from time to time. His motto is to “Live life one day at a time.”
10 Heaviest Cars that You Can Buy
7 Diwali Decoration Ideas for Your Home