Calling to all Priyanka Chopra fans! DESIblitz brings you the latest gossip on an intimate moment between PeeCee and British actor Tom Hiddleston!

"When there is a ring on my finger, then I’ll tell the world."

Now, who doesn’t love Priyanka Chopra? She has the perfect formula for an ideal superstar.

The latest buzz is that British heartthrob Tom Hiddleston has fallen for the Desi Girl at the after-party of the 68th annual Primetime Emmy Awards.

An eye witness at the party says they were openly flirting between taking selfies and socialising with guests.

In fact, a source tells E! Online: “Tom had his arm around her and held her close. Afterwards, Tom and Priyanka talked closely and were holding hands at one point for a few moments.

“Priyanka fixed Tom’s bow-tie and then the two kissed on both cheeks.”

The source also shares that the Quantico star exchanged phone number with the Thor actor, before embracing in a long hug:

“She (Priyanka) and Tom said goodbye and she told him that she will see him later. They left the event about a minute after each other.”

PeeCee and Tom, who recently broke up with American singer Taylor Swift, presented the Director of Outstanding Limited Series or A Movie award to Susanne Bier (The Night Manager).

Wearing a red hot one-shoulder chiffon gown by Jason Wu, the Bollywood babe made fashion headlines with an enchanting twirl on the red carpet. 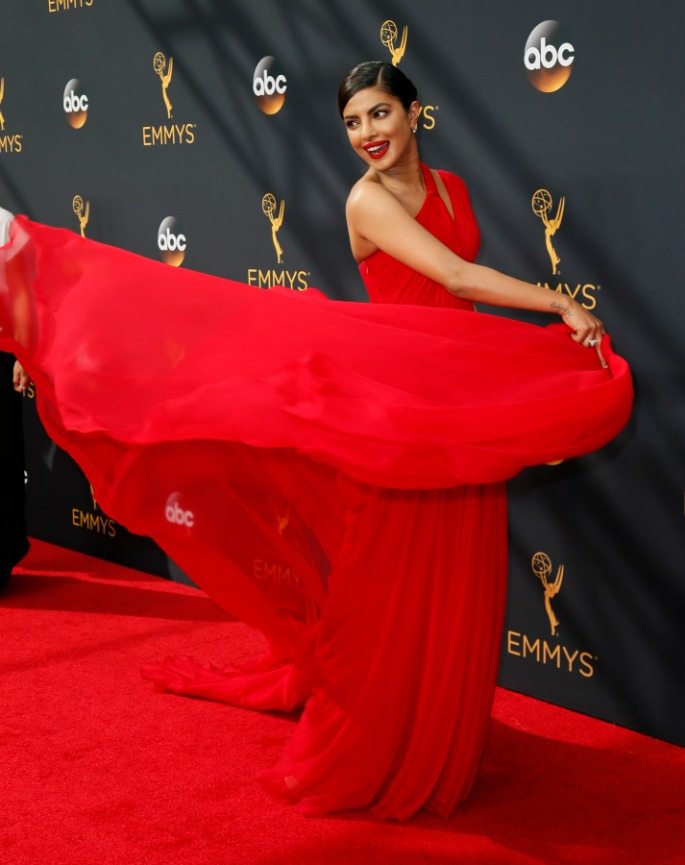 Over the years, there have been conjectures about PeeCee’s affair with Shahrukh Khan. But her special someone remains a mystery.

In a recent report by Zoom, the press notices a ring on her fourth finger.

When asked about her loved one in an interview, the 35-year-old actress says: “Nobody knows that. C’mon!

“When there is a ring on my finger, which is actually given to me, then I’ll tell the world. Til then, no one can claim me.”

In another interview, PeeCee also mentions how she has experienced unrequited love:

“I have experienced one-sided love. The side where a friend has fallen in love with me.

“It’s happened a few times actually and I haven’t been able to reciprocate. Which is painful.”

While Tom and Priyanka’s relationship is yet to be confirmed, we are proud of her fantastic achievement in the international domain.

Look out for her return as Alex Parrish in Quantico Season 2, which premieres on September 25, 2016 at 10pm (USA time) on ABC.