it was branded by Hindus as an "undignified disaster"

Naomi was approached to do the film after her appearance at Lakme, which wowed screen casters in Mumbai. But the supermodel’s first venture has attracted very poor reviews by film critics and it was branded by Hindus as an “undignified disaster” and an “unholy mess.” 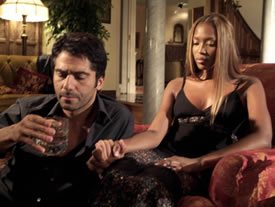 The movie was filmed in New York and Princeton (New Jersey) and is a drama about a couple living in New York, called Meera and Dev. The story starts with the Eve of Holi, a festival of colours that heralds the coming of spring in India.

However, the fun party goes wrong when an unexpected incident triggers the guests to start confessing their inner most secrets that have never been revealed. The story continues into the morning of Holi with catastrophic results not expected at the start.

Despite the efforts of the film makers to make an interesting film, it has been marred by comments against it. The president of the Universal Society of Hinduism, Rajan Zed, said of the movie:

“Hindus have strongly objected to the usage of Hindu terminology in movies and Karma, Confessions and Holi has nothing much to do with karma or Holi.”

He added, “Hindus welcome world film-makers making films about Hindu subjects but taking Hinduism seriously and respectfully and not re-imagining its concepts and symbols just for mercantile greed.” And said, “Holi and karma have definite meaning for devotees, and improper usage of such terms is not okay.” 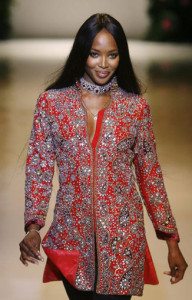 At Lakme Fashion Week, Naomi Campbell walked the Indian catwalk for the first time. She appeared in a charity show called ‘Mai Mumbai’ (I Am Mumbai). Campbell and New York-based hotelier, Vikram Chatwal, put together the show. It attracted the cream of the Indian and international fashion fraternity design clothes for an auction from which the proceeds went into improving the city’s medical infrastructure.

Naomi had never modelled in India before and she loved every minute. Naomi said of her fashion experience in India, “Even where Indian fashion is concerned, I love the clothes – the sari. Also, Indian women are very pretty and they carry themselves very well.”

Naomi was spotted at the age of 15 by model scout Beth Boldt window-shopping in London’s Covent Garden in 1986. She became the the first black model to appear on the cover of British Vogue in 1987. She then went on to be a famous supermodel.

But activities away from modelling and the catwalk have not been very fruitful for her. In 1994, she tried singing and released an album titled Babywoman which did not do well. She also battled with a cocaine problem and went to rehab in 2005.

In 1998, she pleaded guilty to hitting assistant Georgina Galanis with her phone and then other similar incidents of assault included her throwing a jewel-encrusted Blackberry at maid Ana Scolavino in 2007 for which she charged and given five days community service. In 2008, Campbell is arrested aboard a British Airways flight at Heathrow Airport for investigation of assaulting two police officers.

However, her modelling career has still survived to date. But we are not sure whether acting is an option for her, based on the reaction to her first Bollywood debut.

Amit enjoys creative challenges and uses writing as a tool for revelation. He has major interest in news, current affairs, trends and cinema. He likes the quote: "Nothing in fine print is ever good news."
IIFA 2009 Awards Winners
Love Aaj Kal censored by Sikh board