With one OS to rule them all, Microsoft has unveiled its next operating system, Windows 10. The makers believe that the new OS is everything that Windows 8 should have been. DESIblitz reviews its features.

"It's extremely important for Microsoft to get Windows 10 right."

Microsoft are taking a second stab at a mobile friendly, PC operating system (OS) in Windows 10.

Its predecessor, Windows 8 was widely considered a disappointment – its apparent identity crisis being a popular reason for discontent.

“We need to ensure we are disrupting the business as little as possible. Bringing in Windows 8 and mandating that as an operating system is too much. 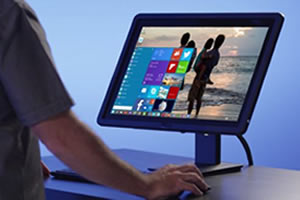 “I’ve accepted that we’ll have to run a dual standard for Windows but I’m not prepared to take the [whole] business on that journey; I think it’s too much, too quickly.”

However, Windows 10 is already impressing, with praise from a number of analysts and tech sites.

“Windows 8 is only being offered to employees by about one in five organisations right now. Windows 7 is still the de facto standard for enterprise in the desktop environment.

“For Microsoft to continue to be able to get the best and latest technology in the hands of the enterprise workforce all over the world, it has to have a vehicle to do that – and Windows 10 is its best shot.”

CNET have labeled the OS ‘everything Windows 8 should have been’. Whilst TechRadar say Windows 10 is ‘a necessary move’ and that Microsoft are now ‘on the right track’.

The familiar desktop format, has returned. Users will recognise the task bar and the Start Menu, staples of the OS.

David Johnson said he considered the return of the Start Menu ‘critically important’. He said: “The Start Menu is perhaps the most important thing that will make the desktop experience familiar to business users, and will help reduce resistance to its installation.”

Clicking the Start Menu opens up the familiar tray of stacked apps. However, it is now accompanied with news, social updates and more through Live Tiles, introduced in Windows 8.

The tiles are resizable and can be reorganised to the users preference.

Windows 10 also adds a new search function. Located on the taskbar, the search button lets you search your files, the Windows Store and even the Internet. 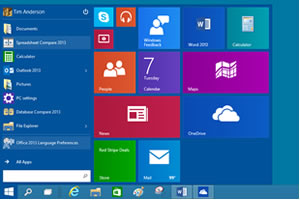 PCs running the new OS are rumoured to feature Windows Phone’s, Cortana. The Siri and Google Now competitor’s jump to PC is all but confirmed after bits of code leaked, detailing the ‘voice activated digital assistant.’

The software is Microsoft’s biggest push to unify devices under one operating system (OS). Windows 10 will reportedly run on phones, tablets, PCs and even Xbox consoles.

The tech firm are planning to showcase a number of ‘universal apps’ at their Build conference in April 2015.

Microsoft say the device running the software will dictate the behaviour of the OS. The ‘dynamically adjusting interface’ will change depending on whether you are using a keyboard/mouse or touch.

Windows 10’s preview has already seen its first update, which addressed bugs and added some Windows Phone features. Data Sense, used to moniter the amount of online data you have used, as well as Battery Saver have been added.

Also making the jump from phone to PC, is the Action Center. Essentially a notifcation hub, Action Centre lists incoming messages, status updates, calander events and more in one spot. 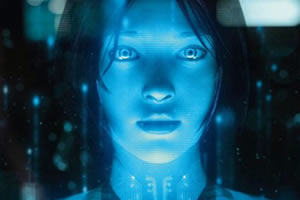 This means users no longer have to switch between Desktop Mode and the ‘Metro’ mobile friendly interface.

The technical preview is available to those who opt in. However, it is recommended that users do not install the tech preview on their primary PC.

Windows newest operating system has managed to confuse before its even been released. The mega-brand have decided to skip out on the obvious ‘Windows 9,’ and have gone from Windows 8 to 10.

This follows a history of confusing naming habits. Microsoft first abandoned its linear naming system after Windows 3 – jumping to Windows 95, named after the year of its release.

The firm then stuck with the release year naming system until the Millennium Edition (Windows ME), in 2000. Since then, we’ve had XP and Vista, before returning to a numbered system with Windows 7 and 8. 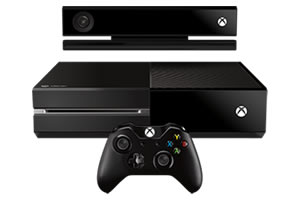 Microsoft have expanded their unconventional naming process to the Xbox division. Confusing consumers by releasing Xbox, Xbox 360 and most recently, the Xbox One.

BBC tech editor Leo Kelion, spoke to a Microsoft rep about the name change. He said: “I asked Terry Myerson, the chief of operating systems at Microsoft, why the leadership had chosen the moniker Windows 10.

“He told me somewhat obliquely that it resonated best for what the company would deliver across the breadth of devices. Unifying a brand across all devices is key to Microsoft’s vision.

“But the Windows 10 name also symbolises that this will not be an incremental update, but something of a fresh start.”

However, Reddit users have speculated that the name skip was down to a coding issue, after a post from an alleged Microsoft developer.

Cranbourne said: “Microsoft dev here, the internal rumours are that early testing revealed just how many third party products that had code of the form of Windows 9,” in reference to previous operating systems, Windows 95 and 98.

Microsoft’s new OS is scheduled to release in 2015. The price is yet to be confirmed.

Zak is an English Language and Journalism graduate with a passion for writing. He is an avid gamer, football fan and music critic. His life motto is “Out of many, one people.”
Top 5 Smartwatches for 2015
How to help Desi Parents understand Technology