Students in London have won the chance to design a T-Shirt inspired by the 2016 Rio Olympics. The winning design is now available to buy in Marks & Spencer.

"The winning t-shirt design is superb"

Students across London have designed a T-shirt inspired by the Rio Olympics 2016. It is now being sold by popular high street retailer, Marks and Spencer (M&S).

The Olympics inspired shirt was created by pupils from four secondary schools and two other organisations after winning a competition.

The special competition was organised by HRH The Prince of Wales’ mentoring charity Mosaic, after teaming up with M&S and their ‘Spark Something Good’ initiative.

Teams were required to follow the design process that is used by the leading department store M&S to create the product. This included producing an initial concept, carrying out market research and commercial planning, as well as outlining both social media and digital marketing plans.

The competition saw teams present their final design and marketing strategy in front of a senior panel of judges. 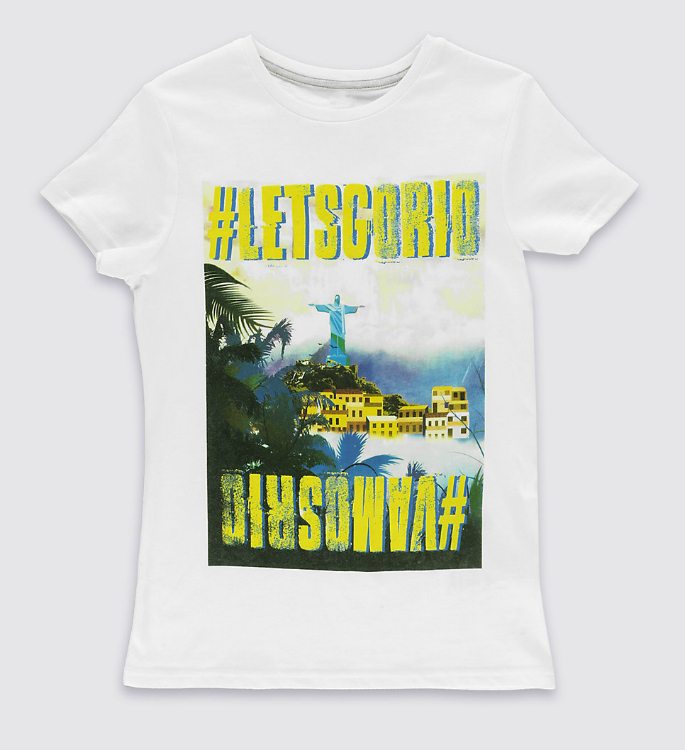 Head of Global Delivery for Plan A at M&S Adam Elman says: “At M&S we’re committed to working with the local communities we serve and it was great to welcome the pupils into our London office.

“We were hugely impressed by both the quality of the ideas and the work ethic shown by all of the students. They had a tough brief with a very short deadline and all of the teams delivered a fantastic product idea and pitch.”

The winning T-shirt sees a bright pop-art landscape of Rio de Janeiro with the famous statue of Christ the Redeemer atop of Mt. Corcovado. The artwork also sees bright hashtag slogans, #LetsGoRio and #VamosRio, above and below.

Managing Director of Mosaic, Jonathan Freeman, adds: “This was an exciting opportunity for an enthusiastic group of young people and, as ever with young people, they proved themselves to be talented, organised and determined.

“The winning t-shirt design is superb but all those taking part acquitted themselves with style. Thanks to M&S for their energy and support in making this project a reality.”

The charity Mosaic is part of The Prince’s Trust and was founded by HRH The Prince of Wales in 2007.

The charity offers mentoring programmes for young people from some of the UK’s most deprived communities. By creating opportunities, Mosaic allows these young people to realise their full potential.

The ‘Let’s Go Rio’ T-shirt is priced between £8 and £11 and is aimed towards 5-16 year olds. It is now being sold in M&S stores and can also be purchased online.

Nazhat is an ambitious 'Desi' woman with interests in news and lifestyle. As a writer with a determined journalistic flair, she firmly believes in the motto "an investment in knowledge pays the best interest," by Benjamin Franklin.
Vanity Fair names Deepika Next Generation of Hollywood
Prabal Gurung teams up with TOMS to raise Funds