“Singh is Kinng” makes Bollywood box-office history. The film has broken records since its release on 8th August 2008.

The film starring Akshay Kumar, Katrina Kaif, Neha Dhupia, Om Puri, Javed Jaffrey, Kiran Kher, Sonu Sood and others, was directed by Anees Bazmee and produced by Vipul Amrutlal Shah with music by Pritam. The underlying aim of the movie is to change the stereotypical view of Punjabi Sardars in Bollywood films. It also features the hugely popular music video of the title track “Singh is Kinng” featuring Hip Hop star Snoop Dogg. Seen as a historical collaboration for Bollywood. 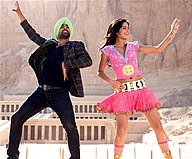 The Bollywood blockbuster is a story of fun, humor, love, emotion and action is about a happy-go-lucky character called Happy Singh played by Akshay Kumar, who from being the mishap guy in his village in Punjab, is convinced to bring back a fellow villager, Lucky Singh played by Sonu Sood, from Australia who has gone astray running an underworld gang. Happy Singh vowing to bring him back goes on the trip with Rengeela played by Om Puri.

The journey entails an unexpected visit to Egypt where he falls for Sonia, a law student from India played by Kartina Kaif. Upon reaching Australia, he gets mixed up with the underworld run by Lucky Singh but ends up running the organisation and changing the views of it members to do good and not bad. Early in his visit, he meets Rose Lady, played by Kiran Kher, a lonely working-class lady who feeds him and sees him like a son. 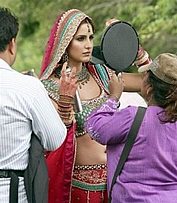 As a twist, Sonia again enters his life, as she turns out to be the daughter of the Rose Lady, due to visit Australia but is best online casino coming with her fiance. As always willing to help, Happy stages the Rose Lady as a rich lady to keep up appearances for her daughter”s sake but it ends with the truth coming out and the real love between Sonia and Happy concluding the film in a funny wedding ceremony.

Akshay Kumar told the media, “Im very happy for the film. It is doing well and I thank people for appreciating my film.”

When drawing comparisons between films such as Om Shanti Om, and his film, Akshay was not keen at all on this concept and said, “It is wrong to compare the success of the two films. The Hindi film industry is one big market. Whatever money earned from the movies made goes into one kitty … the film industry.”

When asked what made the film click with audiences, Akshay said that it was for the first time all the main characters in the film were Sardars, the title of the film was catchy and it conveys the message about a positive attitude to succeed in life.

Akshay was asked if he saw himself as the new “king” of Bollywood, Akshay replied,”I have been around for only 15-16 years. To become a king, one has to have a long span of good work. I may call myself, if I survive for another 15 years.”

There is now even talk of a sequel due to the immense success of the movie. Vipul Shah has said, “First of all, we need to get hold of a story to justify the humungous expectations that people would have from the sequel.”

Madhu is a foodie at heart. Being a vegetarian she loves to discover new and old dishes that are healthy and above all tasty! Her motto is George Bernard Shaw's quote 'There is no love sincerer than the love of food.'
Manoj Kumar sues Shahrukh Khan
Kareena Kapoor goes Hollywood