A father started his own restaurant after becoming fed up with the lack of authentic Pakistani cuisine in London.

"it's a sort of family business now"

A father-of-four struggled to find authentic Pakistani food in London so he opened his own restaurant.

The restaurant began in the back of Habib’s garden in 2014 before finding a venue.

Initially, Habib used to provide catering services for small events with his wife cooking the food.

The first Biryani Guys restaurant was launched in 2016 and now, there is a total of three branches.

Two branches are London; in Gants Hill and in Marylebone. A third branch is in Birmingham.

Habib, who is from Karachi, Pakistan, said:

“We used to look for Karachi type of food and could never find authentic stuff.

“For me, opening a restaurant was actually the last sort of work I would want to do as my dad had a restaurant and we could never go on any holidays – but it was fate.

“I couldn’t even make a cup of tea before! However, it’s a sort of family business now, my wife manages all the cooking and recipes, I tell her what I need and she manages it all.

“We couldn’t find Karachi type of biryani and kebab rolls, we used to crave these so we started in 2015 from home in Luton and then formally launched Biryani Guys in the city in 2016.

“I myself was born in Saddar, Karachi and went to school at St Paul’s High School, I ended up in what is now called Iqra university and did my MBA, I also did a masters in finance here, in 2011.

“I usually go to Karachi for around four/five days in a year to see my friends, which is usually in February – my parents live with me in London.

“We’re from Ilford but moved to Luton for a bit then came back to London as my kids are growing up and there is better schooling here.”

Growing up in Karachi meant that Habib was used to eating authentic Pakistani food. 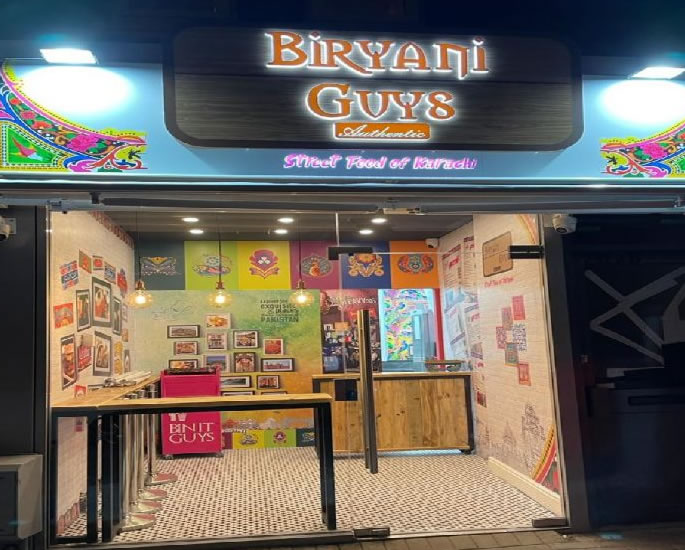 “Karachi is filled with different types of people, it’s like a mini Pakistan in one city and it’s so fast-paced.”

“In Karachi, the food is spicier than in other areas and we just can’t find that here, for example, Karachi Nihari is more spicy.

“At the restaurant, the kebab rolls are my favourite as well as the bun kebabs, chargha and masala fries.

“Even our desserts are inspired by foods I’ve had in Karachi. Our Falooda is similar to this place in Tariq Road called Sunshine.”

It is not just the authentic food that is attracting customers, the restaurant’s interior is inspired by Pakistani truck art.

Dhiren is a journalism graduate with a passion for gaming, watching films and sports. He also enjoys cooking from time to time. His motto is to “Live life one day at a time.”
Steven Gerrard enjoys Prawn Curry at Asha’s in Birmingham
Samosa Shop in Switzerland guarantees Orgasm for customers