What are the Differences between Indian and Pakistani Cuisine?

Both Indian and Pakistani cuisine holds a rich heritage in the Subcontinent. Indian cuisine has been influenced by a 5,000-year history of different groups, cultures, and societies interacting with each other.

This incredible history indicates the diversity of flavours and territorial cuisines found in modern-day India.

When compared to Pakistani cuisine, there are some notable overlaps. However, over the years differences between the two have developed. For instance, Pakistanis use meat extravagantly, especially during festivals and special occasions.

India’s spice palette, on the other hand, is incredibly rich and intricate. Pakistani food relies on simpler flavours. DESIblitz examines the mouthwatering flavours of Indian and Pakistani cuisine.

The Rich Expanse of Indian Cuisine 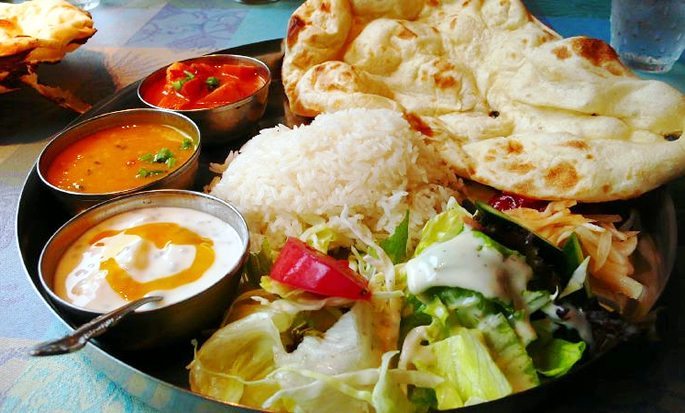 Indian’s history with food is lengthy and diverse. Given the range of difference in soil type, climate, culture, ethnic gatherings, and occupations across India, the country’s cuisines fluctuate significantly from each other.

Taking into account the vastness of India, its cuisine can be split regionally as follows:

Each region is prone to use locally available spices, vegetables, herbs, and fruits. Agriculture plays an important part in dictating the types of food that different regions will eat. This also explains how wheat is a staple in some parts of India but not others.

For example in the north of India, kebabs, parathas and kormas are popular, whereas in the south you will find Bisi Bele Bath, Neer Dosa and Ragi Mudde.

Interestingly, South Indian cuisine is found to be more exotic than the north. Rice is seen as a staple, and many more spices are used.

Another big comparison between the two regions is the use of coconut as a base for dishes. In the north, Indians are more likely to use onions and coriander instead.

Indian cuisine is also massively influenced by religious and cultural customs and traditions. The comprehensive use of different Indian spices, herbs, vegetables, and even fruits indicates the depth of Indian cuisine. A love for vegetarianism is also popular in many parts of Indian society. 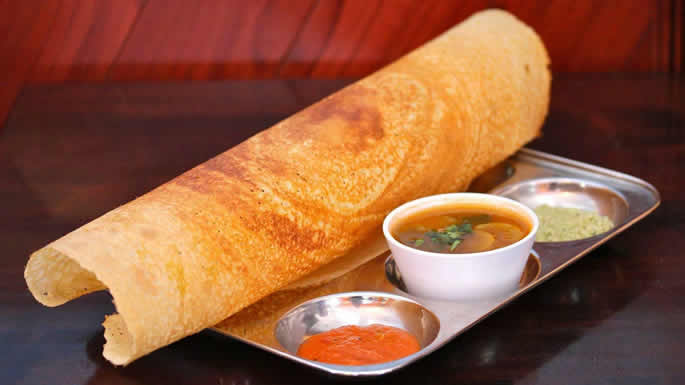 Staple foods eaten today include a combination of lentils (dal), wheat flour, rice, and pearl millet, which developed in the Indian subcontinent since 6,200 BCE.

Since Indian cooking primarily concentrates on vegetables, the variety is more diverse. For instance, you can find a range of lentil dishes which are not common in Pakistani cuisine like arhar daal, tur, and urad.

Other differences exist in the way the same dish might be cooked. Both Pakistani and Indian cuisines have a slight difference in flavour. A dish like ‘Bhagar’ for instance, will see far more spices and ingredients used than its Pakistani equivalent. Such as cumin, curry leaves and so on. Indians additionally use mustard seeds and Asafoetida in many dishes.

While vegetarianism is a prominent part of Sikh and Hindu faith, cultural changes to diet have introduced some elements of meat to dishes. Today, many Hindus are likely to eat at least fish or chicken and even mutton or sheep.

Utilisation of beef is taboo, because of cows being viewed as holy in Hinduism. Beef is, for the most part, not eaten by Hindus in India with the exception of Kerala and the upper east.

The Delicate Flavours of Pakistani Cuisine 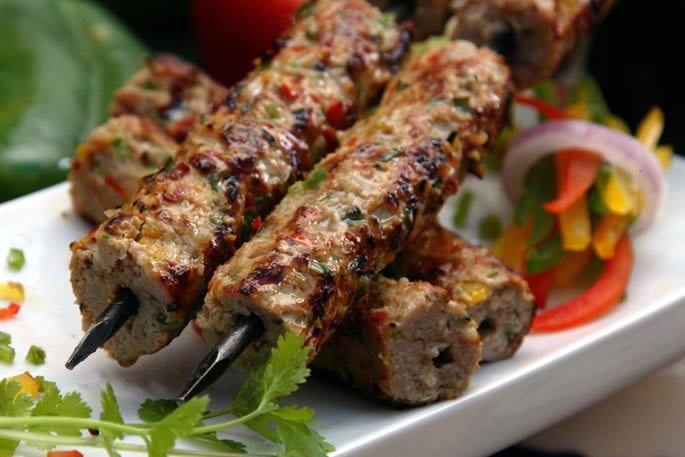 Meat plays a key role in Pakistani and Afghan cuisine, compared to other South Asian foods.

Vegetables and lentils, which are hugely popular in India, are only kept as side dishes or as generic home meals here.

The meat dishes in Pakistan range from beef, lamb, poultry and fish. The meat is typically cut into 3cm blocks and cooked in a stew. Kebabs, Keema, and other similar dishes are made of minced meat. The meat dishes are likewise cooked with vegetables, and rice.

Furthermore, there are some delicacies that are unique to Pakistani food. Such as Haleem, a blend of lentils and meat, which is not found in Indian food.

Again, geographical location also plays a big part in the variety of Pakistani cuisine you will find.

In Punjab and Sindh, the dishes are spicier. Yet in the northern and western side of Pakistan, the food is more inspired by Persian and Afghan cooking. People living in the western area of Balochistan that fringes with Iran usually eat less spicy foods, and instead enjoy more Persian dishes.

Interestingly, Indian Punjabi food shares strong similarities to Pakistani food, and there are some overlaps of flavour and taste. Delicacies like parathas and sarson ka saag are regularly enjoyed on both sides of the border. 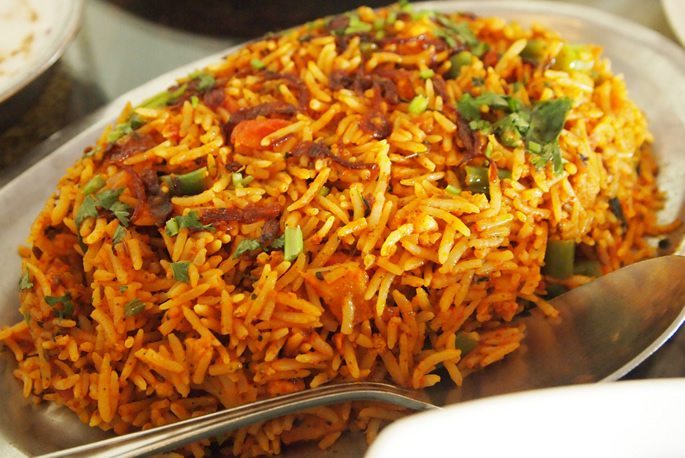 Much of Mughlai cuisine (of North India) is also popular in Pakistan – take biryani and nihari for example.

The greatest contrast is that a few Pakistani cuisines have beef, which is eminently missing from Indian food because of religious reasons.

Pakistanis concentrate on different sorts of meat, for example, lamb, beef, chicken, and fish, with vegetables, and conventional leafy foods.

Since Islam forbids alcohol, it is not easily available at most Pakistani restaurants. While Indian restaurants will often serve alcohol.

Differences of Indian and Pakistani Cuisine in the West 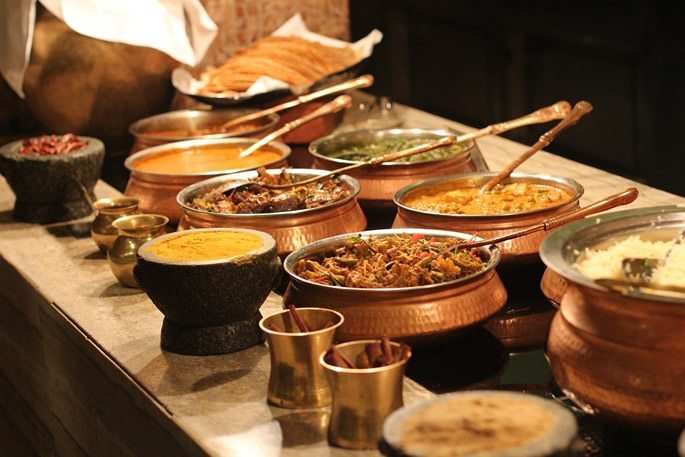 There are key differences between Indian and Pakistani cuisine in the West.

What you have in the West is fusion food. This is diverse in taste as well as names, compared to what is found at “home” in Pakistan and India. Interestingly, some of these Western-made Indian and Pakistani dishes are completely alien to India or Pakistan.

In Europe, the dishes which are sold under Indian and Pakistani cuisine styles are almost same. Usually, meat is a core ingredient, unless you are eating vegetables. Many Pakistani owners name their eateries as “Indian cuisine” simply because this name is more attractive and influential than “Pakistani cuisine”.

In Pakistan, Punjab and Sindh have really comparable dishes to that of Northern India. And the cuisine of these two nations is the most similar to what you will discover in the West.

Different parts of Pakistan (North-West Province and Balochistan) have different dishes in name and taste. They use fewer flavours. Barring Urban centres in those areas, which offer standard Pakistani dishes, you will discover altogether different dishes in the provincial zones, none of which has found its way to the eateries of the West.

Use of Spices in Indian and Pakistani Cuisine 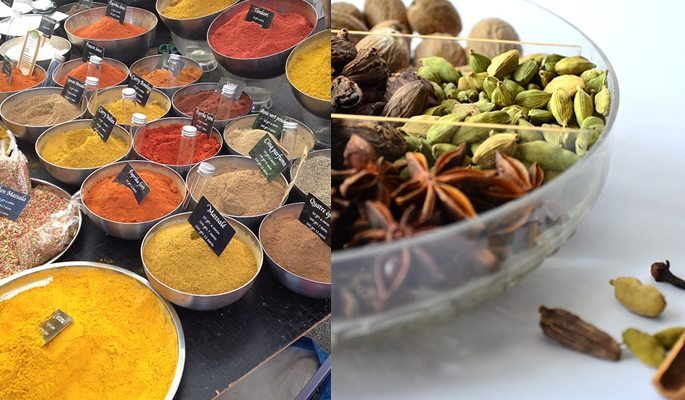 Pakistani cuisine is known for its spicy and sometimes aromatic flavours. Few dishes usually contain liberal amounts of oil, which adds to a richer, flavour and fuller mouthfeel.

Green cardamom, brown cardamom, cinnamon, nutmeg, cloves, mace, and black pepper are the generally used spices in the making of a variety of dishes all through Pakistan and also India.

Cumin seeds, turmeric, chilli powder and bay leaves are extremely popular. In the Punjab area, it is additionally diluted with coriander powder. Garam masala (a blend of sweet-smelling flavours) is an extremely popular mix of flavours utilised in many dishes.

What Pakistan lacks is diversity in food. You will find limited options in Pakistan in comparison to India. Each Indian state enjoys its own staple food. And with plentiful options and cooking to choose from for vegetarians and non-vegetarians.

Even the beverages are different from place to place. Kahwa, lassi, masala chai, filter coffee, faluda, kaanji, thandai, and rose kesar milk. At the same time, India lacks in the variety of meat dishes, which are relatively predominant in Pakistan.

However, while the differences of the two cuisines are vast, they both offer food lovers a rich and flavoursome dining experience.

The delicacy of aromas and balance of spices make both Indian and Pakistani cuisine stand apart from other world cuisines.

Jugnu is a creative and accomplished writer from Pakistan. Apart from this, he is a real foodie and passionate about all types of food from across the world. His motto is “Hope against Hope.”
McDonald’s is Heading for a Shutdown Crisis in India
The Best Burgers Every Fast Food Addict Must Try