Krrish 3 ~ Gupshup with Hrithik and Priyanka

Boasting some of the best special effects Bollywood has ever seen and a stellar cast, this superhero film oozes wow factor all the way, and we bring you a special gupshup with Hrithik Roshan, Priyanka Chopra and singer Alisha Chinai to celebrate its release.

"It breaks all boundaries where vision is concerned. The basic content of a Hindi movie is being challenged here."

Hrithik Roshan and Priyanka Chopra met up with DESIblitz to give us a special insight into the latest offering from the Roshan’s superhero franchise – Krrish 3.

In the form of an superhero Hrithik Roshan will grace the big screens worldwide on November 1, 2013. Krrish 3 releases just before Diwali weekend giving audiences the chance to enjoy the movie anytime before and throughout the festive period.

The movie is a sequel to Koi…Mil Gaya (2003) and Krrish (2006). It is produced and directed by Rakesh Roshan and stars Hrithik Roshan, Priyanka Chopra, Vivek Oberoi and Kangana Ranaut to name a few from the array of talented actors we will get to see in this film.

Even though the film continues the story of Rohit Mehra and his son Krrish, we will see Hrithik Roshan save the world in an intense avatar. Hrithik recently stated in an interview that he is ‘happy that the expectations are higher’ for this film. 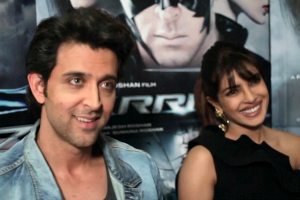 In an exclusive Gupshup with DESIblitz, Hrithik said: “I think it’s just one of a kind. It’s never been done before in our cinema. Something like this has never been attempted.

“The basic content of a Hindi movie is really being challenged here,” Hrithik adds.

With Hrithik playing the role of father and the son he has a lot on his plate as he would need to convince the audience to look at him as two different personalities rather than an actor simply playing two different roles.

He also admits that the character he is playing is someone who never gives up and who is predominately there to serve others in a humane manner.

DESIblitz would agree that Hrithik’s character in the movie is pretty much like him in reality when it comes to the subject of not giving up. 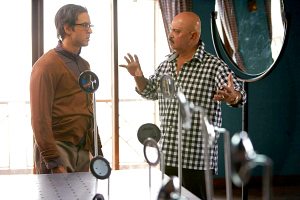 Especially as he still managed to deliver those impressive stunts despite a serious back injury. It is refreshing to see such a star practice something positive that he believes in.

Vivek Oberoi is also back on the big screen as the antagonist. Vivek has a tendency to portray any role effectively and it is a refreshing change to see a positive lead play a negative character.

Vivek admits: “There is something seductive about Kaal – it’s an invitation into darkness.”

Kangana Ranaut who is seen as a mutant in the film, is again a pleasant change from the norm. We are used to seeing Kangana play disturbed and disillusioned characters; however, this would be a test of talent and a challenging role for her.

With Krrish 3 being one of the rare Indian superhero trilogy movies, it has already sought intrigue and speculation from the western film world. And this can only work in Kangana’s favour, serving as a perfect platform for her to get noticed and appreciated on an international scale.

Kangana explains: “I had to walk like a cat,” as one of the attributes of the mutant she is playing in Krrish 3. Considering we already have the Bollywood’s ‘junglee billi’ Priyanka in the movie it would be fascinating to see who takes the cream in feline acting abilities here.

Bollywood’s well-known star and up and coming international singer, Priyanka Chopra is seen playing the role of Priya Mehra. Priyanka will be seen in a leading role, romancing superhero Krrish. Speaking with DESIblitz, Priyanka admitted: 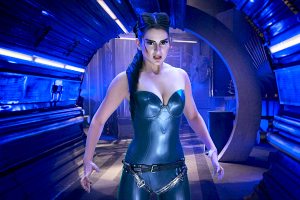 “For me, there is a familiarity with Priya, and coming back onto Krrish 3 it felt like family, it felt like coming home. These are characters that I knew. And Priya is a tough girl, she believes in family, she believe in values.”

Priyanka has become the first Bollywood talent to branch out to the international music industry. Her last single ‘Exotic’, released in July and it has been selected as the official theme song of Guinness International Champion Cup 2013. Priyanka says:

“My music career is just an expansion of me creatively. I’m an actor, and I will take a few years to become the musician that I really wanna be. It’s so new for me, I’m trying to be the best that I can right now.”

Priyanka also says she loves Papa Roshan. She mentions coyly that she was scared of him when she was new to the trilogy. However, she admits that as a newbie actor at the time, she learned invaluable skills from the Director.

Talking about the new additions in this film, Priyanka said: “Vivek is unbelievably talented and Kangana is superb.”

Kangana was also on hand to praise Priyanka, saying:

“Priyanka is a very enthusiastic and multi-faceted actress. She can sing, dance, has been a Miss World as well as a pop star. She is a superwoman kind of a person.”

With just love and appreciation shared between co-stars, it should reflect good chemistry on-screen.

Rakesh Roshan is expecting a high revenue from his superhero venture. According to sources, he is hoping that Krrish 3 will break all records and will pass the currently untouched mark of 1000 crore.

The film was initially supposed to release in 3D format. However, due to a lack of time to convert it, it has been released on 2D format.

However, this movie has amazing special effects, our first full on Indian superhero in Hrithik, Priyanka who is not just an actress but also an international singer, and talented actors like Vivek Oberoi, Kangana Ranaut and Rekha who have been directed by the very respected Rakesh Roshan. With all this it seems like a perfect package for a big earner.

We are hoping to see Papa Roshan’s direction and guidance, and Junior Roshan’s dedication to the role take Indian cinema into another league of trilogies, superheroes and special effects. Krrish 3 releases on November 1, 2013.

After a short stunt on stage, Archana decided to spend some quality time with her family. Creativity accompanied with an aptitude to connect to others got her to write. Her self motto is: “Humour, humanity and love is what we all need.”
The Truth behind the Bollywood Casting Couch
Highest Earning Bollywood Actors of 2013