Is Suhana Khan getting ‘Bollywood Ready’ in New York?

Suhana Khan has been acting in numerous projects throughout college and recently university. Does this mean she is getting ready for Bollywood?

“Nyc (nice) she is learning acting n (and) direction.”

Suhana Khan is no stranger to the world of acting and it appears she is following in her father, Shahrukh Khan’s footsteps.

She was seen playing the protagonist in her college play and according to the pictures she aced her stage performance. Suhana was seen wearing black trousers, a white vest and a black top hat with her hair out.

Behind her, you can see her co-star with a frightened expression on his face as though he is being threatened. Suhana has accumulated a large fan following with many taking to Instagram to share their delight.

“Nyc (nice) she is learning acting n (and) direction.”

Most notably Suhana Khan featured in her classmate’s short film, The Grey Part of Blue directed by Theodore Gimeno.

The film’s poster was shared online, which showcased Suhana. She was seen in a black t-shirt, blue jeans and a black jacket. 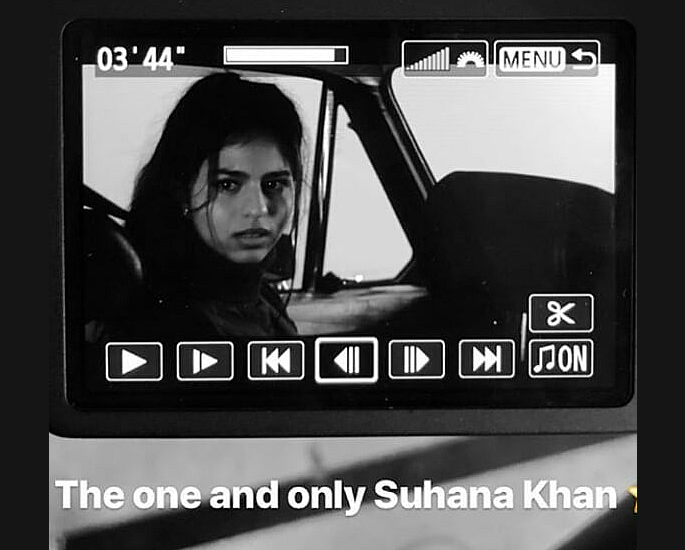 Meanwhile, pictures of Suhana shooting for the film were also shared online. One of the pictures showed Suhana Khan inside a car in front of a green screen.

Another shot included Suhana appearing in a camera screen with a worried expression. Shahrukh Khan has also publicly supported his daughter’s acting projects.

He shared a sneak peek of her play, Romeo and Juliet.

He posted the collage on his Instagram and commented:

“With my Juliet in London. What a wonderful experience and exceptional performances by the whole cast. Congratulations to the whole team.”

During the chat show, My Next Guest Needs No Introduction with David Letterman, Shah Rukh Khan spoke about Suhana.

SRK mentioned how he deals with his daughter’s boyfriend. He said:

“I just want to say ‘just kick the person out’ ugh … But I say you know in life it happens that you have to give and take in relationships darling.

“I hate explaining it to her (Suhana). I want to tell her this guy’s no good.

“But I have to and choose presents for him sometimes, which is the worst thing possible.”

Does this mean Suhana is getting ready to embark on her Bollywood journey? We will have to wait and see what is in store for this up and coming actress.

Ayesha is an English graduate with an aesthetic eye. Her fascination lies in sports, fashion and beauty. Also, she does not shy away from controversial subjects. Her motto is: “no two days are the same, that is what makes life worth living.”
Imran Khan and wife Avantika Malik heading for Divorce?
Nawazuddin firmly reacts to Criticism of Sacred Games 2