Boxer Amir Khan has been accused of breaking UK quarantine after returning from New York and failing to self-isolate.

"We made examples of footballers not following the rules"

Amir Khan allegedly broke two-week quarantine rules after travelling from New York to the UK and failing to self-isolate.

The boxer shared pictures on Instagram from a trip to New York, which included a photo with his daughter Alayna at Staten Island Mall.

Nine days later, he shared another image of himself in London.

Amir had told his social media followers that he was leaving New York for home, however, it appears as though he travelled from his Bolton home to London, instead of self-isolating for 14 days.

During his trip to the US, Amir appeared not to isolate on arrival after sharing a video of him “feasting with family and friends” in New York.

According to his social media, he has failed to abide by the government’s required 14-day quarantine period after returning from international travel, with a fine of up to £10,000 for repeat offenders.

A source told The Daily Mail: “We made examples of footballers not following the rules, so why not Amir?

“Celebrities and sports professionals that unapologetically break the rules and even post their whereabouts on Instagram need to be reprimanded for their actions.”

Amir Khan was also seen visiting ex-diplomat of Pakistan, Mansoor Raja, at his home in London, which could potentially put him at risk.

Days before his trip to New York, Amir was seen with his wife Faryal Makhdoom at the Islamabad Marriott Hotel in Pakistan. 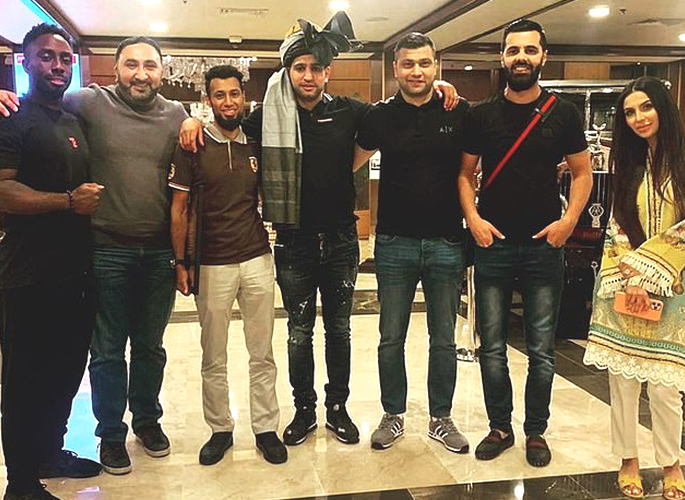 The boxer shared a photo alongside a group of five friends. They were seen with their arms around each other, which appeared to be another break in following social distancing rules.

This is not the first time that Amir Khan has been accused of breaking Covid-19 rules.

The father-of-three was previously accused in August 2020 when he celebrated Eid with friends and family at his Bolton home.

He also allegedly flouted the rules in May after he reunited with his parents and met them at their home following a public and bitter feud.

It was the first time that they met their grandson Muhammad Zaviyar.

The former world champion’s siblings and cousins were also there, many of whom he had not spoken to after also falling out with them.

Amir has continued to travel throughout the pandemic. In September 2020, he went to Dubai with wife Faryal. The pair shared photos from the luxury destination.

Dhiren is a journalism graduate with a passion for gaming, watching films and sports. He also enjoys cooking from time to time. His motto is to “Live life one day at a time.”
Woman who had Child with Pakistani Man reveals Racist Texts
Ex-BofA Indian Analyst used Company Card for ‘Adult Entertainment’