A viral video has captured the moment an Indian wife found her husband naked in a hotel room bed with his lover.

the scorned wife pulls the duvet away.

A video has gone viral of an Indian wife catching her husband naked in a hotel room with his lover.

The incident reportedly happened in Jaipur and captured the wife’s angry reaction. She is then seen beating the woman as police officers watch on.

In the video, a group of people, including the officers, are standing outside a hotel room as they prepare to disturb the lovers.

One officer enters the room and the footage shows the alleged lovers in bed sleeping.

The group then wake up the lovers by shouting and clapping.

Meanwhile, the scorned wife pulls the duvet away.

She is then seen walking towards the woman’s side of the bed and slapping her several times while the officers and her nude husband look on.

The Indian wife drags the woman from the bed and continues to attack her. Her husband is then seen rushing to find his underwear.

Officers in the room try to calm the situation down, control the wife and prevent her from carrying out any further attacks.

A short while later, the wife is seen leaving the hotel room along with the rest of the group as her husband is left looking embarrassed.

The attack came after the woman found out that her husband had been having an affair with a teacher working in Jodhpur, Rajasthan.

It was reported that the man is a police officer with The Central Reserve Police Force (CRPF).

The wife began suspecting that her husband was cheating on her, especially because he would often be away, claiming it was for work purposes.

As a result, the woman began her own investigation into the alleged extramarital affair.

The wife and her brothers eventually tracked her husband to a hotel room in Shastrinagar, Jaipur.

They, along with police officers, then entered the room using a master key.

Since the incident went viral, the mistress has filed a complaint against the wife for harassing her in public.

She also filed another complaint in relation to the production and distribution of the video that showed the pair together in the hotel room.

They have registered a case against six people including the wife of the CRPF officer.

Watch a News Report of the Incident 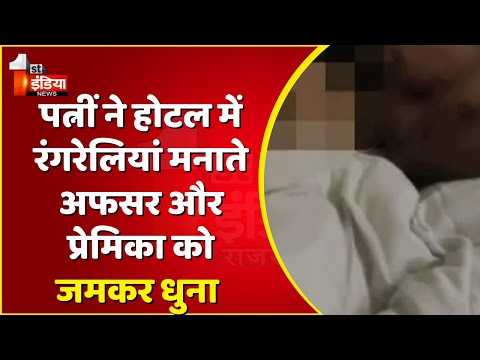 Dhiren is a journalism graduate with a passion for gaming, watching films and sports. He also enjoys cooking from time to time. His motto is to “Live life one day at a time.”
Indian Man sends Girlfriend’s Nude Video to her Parents
£68 Million in Unpaid Taxes found at Dainik Bhaskar Group