A man has released a video of his wife being intimate with an IPS officer as proof of her affair. The woman claims that the sex tape is fake.

"I have done nothing and I deny the allegation."

In an attempt to prove his wife was having an affair, a man from Bengaluru has released a sex tape of his wife and an Indian Police Services (IPS) officer being intimate.

His wife, however, insists that the video is fake.

The woman’s 40-year-old husband has accused the IPS officer of being the man in the sex tape, and also claims that he forced his wife to have an affair with him.

The IPS officer in question has also denied all allegations. He was posted at Bengaluru Rural and has been identified as SP Bheemashankar S Guled.

Since the allegations came out, the husband who is a resident of Davanagere claims that the couple has received death threats from the officer.

The husband who is a software engineer filed a complaint at the Koramangala police station. Due to the incident involving an SP, the police involved in the case sought legal opinion before registering an FIR.

The complaint against the SP was registered on 5th July 2018 as a non-cognisable offence. In the complaint, the husband writes that between 2016 and 2018, Guled was the Superintendent of Police of Devanagere district.

During this time, the husband and wife duo had a photography studio in the town. He claims that the affair began when Guled approached his wife to take photos of his twin daughter’s birthday celebrations.

Since that meeting, the husband alleges that the Superintendent began approaching his wife for sexual favours. He claims that his wife complied to his requests out of fear.

As an additional claim, the man added that Guled had also taken advantage of his wife at certain times against his will.

By releasing the sex tape to the police, the man hoped to provide proof of the affair between his wife and the police officer.

Through this, he also hoped to show that the SP had abused his position as an officer. He claims that Guled forced his wife to take part in the sexual affair.

Local to Devanagere in Karnataka, the IPS officer has denied all of the allegations and claims he has nothing to do with the couple. According to the Times of India, he said:

“I have done nothing and I deny the allegation.” 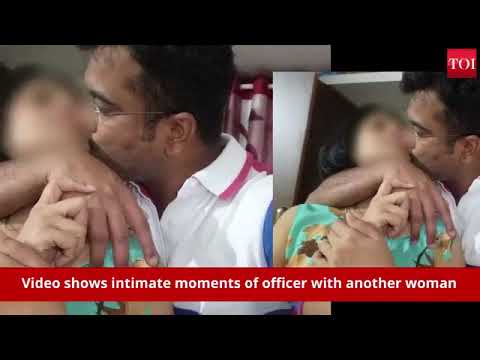 In contrast to her husband’s story, the wife seems to have a completely different story to tell. According to the Mirror Now News, she disputes all of her husband’s allegations.

Speaking to a news channel, the woman claims that her husband faked the videos in order to defame her. She added that the release of the video followed a dispute that the couple had.

According to the police, the woman in the video and her husband are considered missing. She has been missing since the day that the video was released.

The intimate video has since gone viral and the Home Minister has constituted a high-level inquiry.

As confirmed by the Deputy Chief Minister and Home Minister G Parameshwara, if there is any truth in the allegations made against Superintendent Guled, “appropriate measures” will be taken.

Whilst the husband’s claim of an SP abusing his power is worrying, with so many allegations and counter-allegations being hurled around, it is currently unclear where the truth lies.

Images courtesy of Times of India