In a bizarre incident, an Indian man from Rajasthan was seen shooting celebratory gunfire. A dancer was also performing as the gunfire went on.

the firearm had been illegally obtained.

An Indian man was arrested for shooting celebratory gunfire with an illegal firearm. The incident happened in the village of Ramsinghpura, Rajasthan.

A woman was also seen dancing whilst the man fired several rounds into the air.

It was reported that the village was celebrating after victory in the panchayat elections.

Several men were seen dancing on an open-top vehicle while the woman performed.

The young man, identified as Atar Singh, was seen brandishing a gun and taking several bullets out of his pocket. Meanwhile, another man was showering the woman with money.

Singh loaded the weapon and fired it into the air next to the female dancer. Another unidentified man helped Singh fire another round into the air.

It is believed that Singh and the other men around him were drunk. The celebratory gunfire was filmed and the video went viral.

However, SP Mridul Kachhwa came across the video and requested the Diholi Police Station in-charge to arrest the Indian man.

Approximately an hour after instructions were given, Singh was arrested and the gun was seized. Police discovered that the firearm had been illegally obtained.

Police officers established that the incident took place on January 20, 2020.

The men were supporters of one of the local panchayat members. When they found out he won the election, they celebrated.

Music was playing and the men gathered on an open-top vehicle. They also hired a dancer to perform. 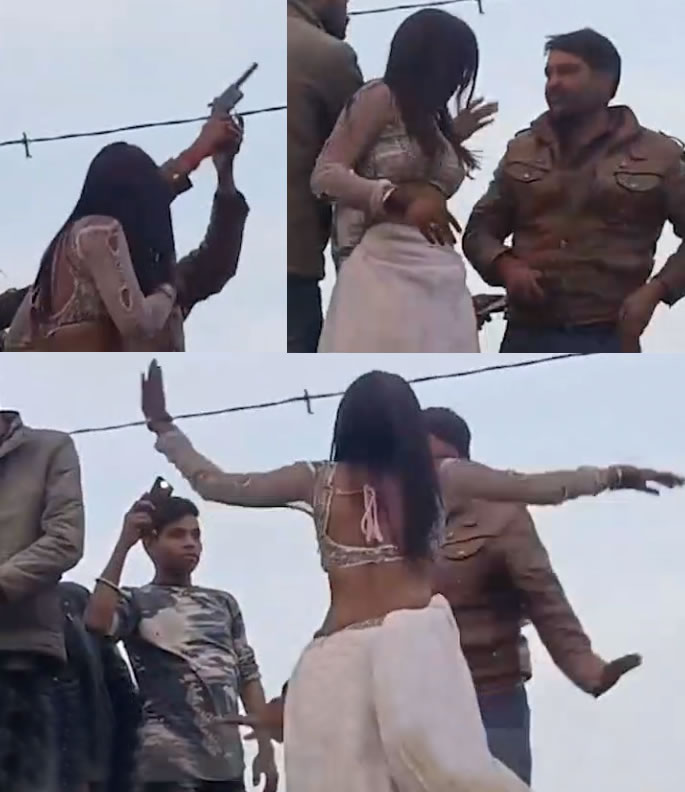 Supporters threw money at the dancer while Singh loaded the gun.

He repeatedly fired the gun in front of the dancer before putting the weapon to one side and dancing with the woman.

Even though no one was injured during the gunfire, police arrested Singh due to the dangers of celebratory gunfire.

While celebratory gunfire may seem bizarre, it is quite common in India, especially during special occasions like weddings.

However, it usually comes with obvious dangers, which result in injuries and even death.

In one incident, a man from Greater Noida, Uttar Pradesh, was rushed to hospital after shooting himself in the genitals during his friend’s wedding.

The man and several friends had been drunk at the time. He had been carrying a pistol around his waist with the intention of participating in celebratory gunfire.

However, when he went to the toilet, he shot himself when the trigger got inadvertently pressed.

The man was rushed to a local hospital where doctors had to perform emergency surgery to remove the bullet and to surgically repair the man’s genitals.

After the man was taken to the hospital, guests informed the police about the incident but no formal complaint was lodged.

Celebratory gunfire is an old phenomenon that has been practised in various parts of India, especially the northern region.

This may be seen as a way to stand out from the crowd when celebrating an event, but it tends to have tragic consequences.

Dhiren is a journalism graduate with a passion for gaming, watching films and sports. He also enjoys cooking from time to time. His motto is to “Live life one day at a time.”
Pakistani Man Blinded by Father & Brothers in ‘Honour Crime’
US Teacher who sent Nudes to Boy faces Deportation