A Pakistani man from Balochistan was blinded by his father and brothers in 2018 in what he called an honour crime. Abdul Baqi has now revealed his ordeal.

Pakistani man Abdul Baqi was subjected to a horrific honour crime where he was blinded with a spoon by his father and brothers at their home in the town of Loralai in Balochistan.

The incident, which happened in May 2018, was over the fact that Abdul wanted to marry the woman he was in love with.

The 26-year-old has now recalled the terrible trauma.

Abdul explained that he was attacked after his father, Dost Mohammad, found out about his intention to have a love marriage.

His father refused to consent to the marriage because the couple got to know each other over the phone.

Mohammad said the woman was “immoral” and unfit for marriage due to the secret telephone courtship.

According to Abdul, his four brothers beat him with batons then held him down as they gouged out his eyes using the handle of a spoon.

Abdul said that one brother, aged 18 at the time, held his head down with his foot and called him an “infidel.”

Abdul told RFE/RL: “The entire time that they were taking out my eyes, he was shouting ‘Allahu Akbar! Allahu Akbar!”

Prior to the horrific ordeal, life had been difficult for the Pakistani man.

With eight brothers and six sisters, his family could not afford to send Abdul to middle school. When he completed the fifth grade, his father tried to enrol him in a madrasah to receive a free education like three of his brothers.

He refused and managed to convince his father that he could help the family by working odd jobs.

When he was 21, a friend gave Abdul the phone number of a close relative and suggested they would make a good couple.

Abdul phoned her and it became the first of many as their relationship blossomed.

The Pakistani man fears that she could face the threat of an honour killing if he were to publicly identify her. The woman’s family know how Abdul was blinded.

Abdul and the woman regularly phoned each other over a period of three years before they agreed to meet each other.

It was the only time he ever saw her and he states that he knew that he loved her.

Abdul approached the woman’s family in early 2018 to ask them for their daughter’s hand in marriage, which they agreed.

However, when her parents went to his home to formally announce the marriage proposal, it went downhill especially since Abdul’s family did not know.

The day after the woman’s family returned home, Abdul was confronted by his father and four of his brothers.

“I clearly told them I will not back away from this girl and our relationship.

“I told them that I love this girl and that nothing will stop me from marrying her.”

“My father asked my brothers whether they agreed to let me marry a girl for love.”

The eldest brother was the first to object.

“Then a second refused and then they all refused.”

Abdul revealed that his mother and sisters were locked in another room while his brothers tied him up with a rope. His father and one brother then gouged his eyes.

“After he took out one of my eyes, I screamed, ‘Please don’t take my other eye.’ But he didn’t listen.

“When they had removed my eyes, they left me tied up in the ropes and put me in a rickshaw.

“They said they were going to take me into the mountains nearby to slaughter me.

“I asked them to please, at least, untie me.

“One of my brothers kicked me in my mouth and said, ‘We are going to kill you and you are asking us to untie you’?” 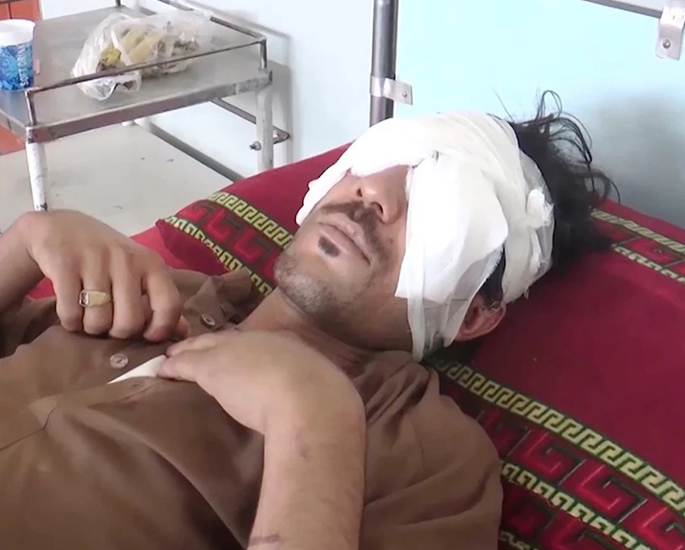 They then changed their minds.

“I don’t know why, but instead of killing me they took me to a hospital in Loralai.

“There was a police officer at the hospital who asked what happened to me, and my father said, ‘He did this to himself.’

“But I shouted out at my father, ‘You are lying!’ So the police arrested my father and two of my brothers.”

Abdul was transferred to a hospital in Quetta where he attempted to call his lover.

“I tried to call her in the morning but her phone was switched off.

“In the afternoon, she returned my call and I told her what had been done to me. She was in shock and broke down crying.”

The woman vowed to still marry Abdul and that her parents agreed for the marriage to go ahead.

On his release from the hospital, Abdul moved into the home of a charity worker named Jamal Tarakai who learned about the case on social media.

Mohammad and his two sons remained in custody for almost a year under charges of “honour crime.”

On April 10, 2019, Abdul submitted an agreement he had reached with his father in court.

It stated that in exchange for Abdul’s forgiveness, his father would let the marriage go ahead. He also promised to give Abdul a private house and to financially support him.

The charges were dropped and the suspects were released. However, Mr Tarakai claimed that the father has not kept his side of the deal.

Abdul has said that his fiancée has come under pressure from her relatives since the attack. Her phone was taken to prevent them from speaking to each other.

Abdul has bought three phones for her and had them secretly sent to her but all were eventually confiscated.

The Pakistani man revealed that they last spoke in October 2019, when they agreed to refrain from contacting each other until there is less pressure from her relatives.