An Indian doctor was innocently beaten and blinded in one eye by a family mob after he told them there was no neurosurgeon to look after their patient.

A shocking video reveals the extremely violent beating of an Indian doctor, Dr Rohan Mhamunkar, at a college hospital in Dhule, in the state of Maharashtra, India.

He was attacked by a patient’s family after he told them no neurosurgeon was on duty to treat the patient.

The graphically vicious attack took place at the Government Medical College (GMC) in Dhule, on Sunday 12th March 2017, where the patient was brought to the facility after suffering a head injury.

When Dr Mhamunkar, aged 35, told the family, they simply have no resources and that the patient needs to be taken to another tertiary care centre, over 20 relatives of the patient, mainly men, unleashed a savage attack on the doctor on the premises of the medical centre.

The footage shot on CCTV cameras reveals men beating and hitting the Indian doctor with items such as rods and kicking and stamping on him as they drag him around the floor and room.

During the attack, his two mobile phones were broken into pieces.

The attack resulted in very serious injuries for Dr Mhamunkar, including trauma to his abdomen, chest and head. More seriously, he suffered an injury to his eye socket which has resulted in him most likely losing vision in one eye.

Watch the video of the attack. Warning the video contains graphic violence. 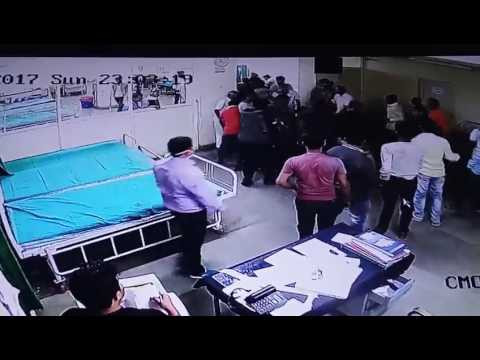 He was urgently taken to the Intensive Care Unit (ICU) for immediate care.

Dr Lahane treating Dr Mhamunkar said: “His brain scan shows a fracture in the left eye orbit. The fracture is not in itself worrisome, but it could affect his optic nerve and that could lead to vision loss.”

In complete shock subsequent to the attack, Dr Mhamunkar said:

“I don’t have a clear memory of the events that occurred on Sunday night. There were many men attacking me for stating that their relative should be taken to a centre that had a neurologist or neurosurgeon.”

Reflecting on this choice of career, the Indian doctor said: “I wish I had taken up engineering instead of medicine. I qualified for both courses.”

It was his mother who encouraged him to do medicine but after the horrid attack on him, she feels wishes she had never asked him to pursue this career.

Arrests were made immediately after the attack. Eight men and one named Pradeep Vetal were taken into custody for the violent attack on Dr Rohan Mumakar.

Mr Vetal, subsequently took his own life in a police cell on Tuesday 14th March 2017. An investigation has commenced into his death.

Since the attack on the Indian doctor, there have been many protests by fellow doctors and health professionals from the Maharashtra Association of Resident Doctors (MARD), seeking protection from such violent behaviour from the public.

Amit enjoys creative challenges and uses writing as a tool for revelation. He has major interest in news, current affairs, trends and cinema. He likes the quote: "Nothing in fine print is ever good news."
Winners of the Asian Business Awards 2017
The Asian Rich List 2017