An Indian man from Karnataka decided to install a lifelike statue of his late wife. The unique incident has gone viral on social media.

"we couldn't imagine entering this new house without her."

An Indian man has paid tribute to his late wife by installing a lifelike statue of her in the dream house they were building together before she died.

Businessman Srinivas Gupta unveiled the statue at a housewarming party at his new family home in Koppal, Karnataka.

The property had been his wife Madhavi’s idea, however, she died in a car crash in 2017 before construction work had finished.

So to commemorate her and to lend her presence to the home, Srinivas installed the statue.

Photos show the statue of Madhavi sitting on a sofa wearing a pink saree and gold jewellery.

It looks very lifelike, down to the individual strands of hair around her temples and the lines on her skin.

“The planning for the house was all done by her and we couldn’t imagine entering this new house without her.”

Madhavi and her two daughters had been in the car together during the accident in 2017. While the girls suffered minor injuries, Madhavi died at the scene.

“We had a great bond. It all happened in a few minutes when she left us. We couldn’t digest the fact that she was no longer with us.” 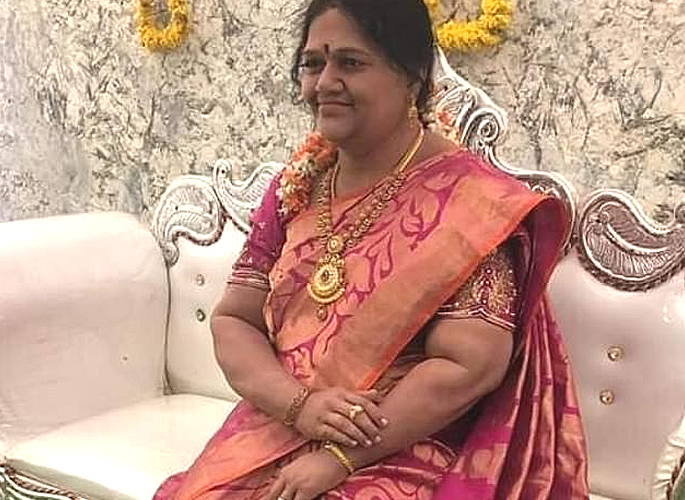 Anusha added that the new home was something her mother “always dreamed about” and that it did not feel right to move in without her.

Someone suggested to the family to get a wax statue made. So, after speaking to several people, the Indian man found an artist named Shreedhar Murthy.

The statue was built inside the house with the help of architect Ranghannanavar who suggested for the statue to be made out of silicon instead of wax.

Srinivas explained: “It is a great feeling to have my wife again at my home, as this was her dream home.

“An artist Shreedhar Murthy from Bengaluru took a year to prepare my wife’s statue.”

“Silicon was used for the statue for durability.

“Our artist suggested me to have silicon statue instead of the wax statue as we live in Koppal which is a hot place, and an AC cant be open all the time to maintain the wax.

“So as per the suggestion, we got the silicon statue prepared.”

After the statue and house were completed, the family finally moved in.

Madhavi’s statue was the centre of attention, with many posing beside it and posting pictures on social media.

The family have said that the statue will remain in the courtyard.

Anusha added: “She used to enjoy the outdoors. We want her to stay with us, just how she used to be.”

Dhiren is a journalism graduate with a passion for gaming, watching films and sports. He also enjoys cooking from time to time. His motto is to “Live life one day at a time.”
Indian Wife kills Husband and Cuts off his Genitals
Pakistani Student commits suicide over University Harassment