An Indian man surprised his sister on her wedding day by gifting her a life-size wax statue of their late father.

“The most beautiful gift.”

An Indian man has been praised for his unique gift to his sister, surprising her on her wedding day with a lifelike wax statue of their late father.

Avula Phani made sure to get his late father involved in his sister’s wedding ceremony.

Their father, Avula Subrahmanyam contracted Covid-19 and his oxygen levels dropped to a point that he passed away due to Covid-19 complications.

Mr Phani explained that the wax figure was life-size and was made in Karnataka, taking more than a year to make.

In a viral video, the statue of Mr Subrahmanyam was dressed appropriately for the wedding.

The wax statue is brought into the venue in a wheelchair, surprising the guests.

The groom directs his new wife to look down the aisle and when she sees the lifelike statue, she bursts into tears.

Both the bride and her mother cry upon seeing the unique tribute to Mr Subrahmanyam.

The bride later composes herself and she smiles as her father gets to be part of her wedding, planting a kiss on the statue’s cheek.

Family members and guests took pictures with the wax statue.

Other guests were seen crying at the heartwarming gesture by Mr Phani. 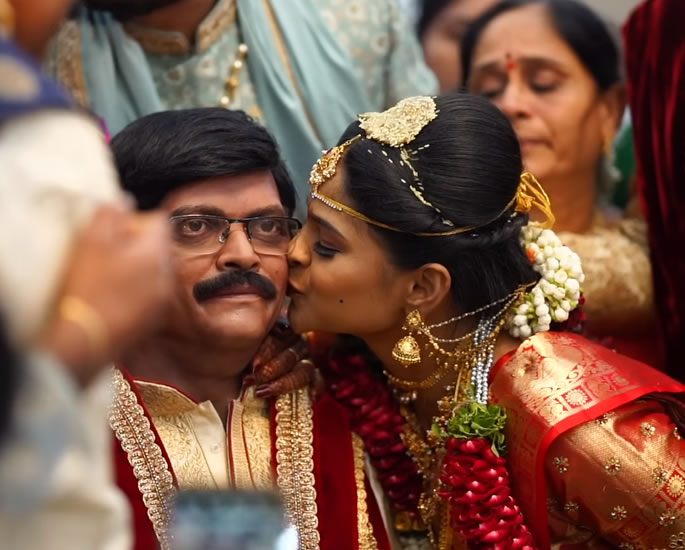 Mr Phani’s surprise to his sister and tribute to their father has been widely praised on social media.

One person said: “The most beautiful gift.”

Another said: “That looks so realistic.”

“That’s how a brother loves his sister… The bond between them is speechless.”

One user commented: “That’s an adorable gift brother. You made yourself a proud son, a proud brother and a proud friend.”

Having wax statues of family members created is not uncommon in Karnataka and previously, one man paid tribute to his late wife by installing a lifelike statue of her in the dream house they were building together before she died.

Businessman Srinivas Gupta unveiled the statue at a housewarming party at his new family home in Koppal, Karnataka.

The property had been his wife Madhavi’s idea, however, she died in a car crash in 2017 before construction work had finished.

So to commemorate her and to lend her presence to the home, Srinivas installed the statue.

Photos showed the statue of Madhavi sitting on a sofa wearing a pink saree and gold jewellery.

It looks very lifelike, down to the individual strands of hair around her temples and the lines on her skin.

Dhiren is a journalism graduate with a passion for gaming, watching films and sports. He also enjoys cooking from time to time. His motto is to “Live life one day at a time.”
Mukesh Ambani resigns from Reliance Jio
Does Infertility in Marriage impact British Asians?