Indian Man arrested for Flashing at Woman who Shared Video

An Indian man was arrested after he was flashing at a woman inside an ATM centre. The woman filmed and shared the incident.

"he moves in closer and touches my shoulder and thigh."

A 38-year-old Indian man from Thane, Mumbai was arrested on May 12, 2019, for flashing at a woman inside an ATM booth.

The man was identified as Sandeep Kumbharkar and the incident took place at around 2:30 am.

The woman filmed the incident and shared it online. She spoke about her ordeal.

Shibani, a 23-year-old woman, was on her way home after celebrating her birthday when she had to withdraw some money. She got out of the rickshaw and went to the ATM.

When the ATM was not dispensing the money, Kumbharkar asked if Shibani needed help. He even offered to pay for the rickshaw but she declined.

This led to an argument between the woman and the rickshaw driver who asked how she intended to pay the fare.

Shibani said: “This is when a cop car pulls up and I explain my situation to them, 5-10 minutes after talking to the cops, I say that I’ll give the ATM another try.”

When she went to take out money again, Kumbharkar returned.

“The man enters the ATM once again. But this time, he moves in closer and touches my shoulder and thigh.

“I instantly back off and yell at him to stay away from me and that I don’t need his help.

“I go back to trying to withdraw money again, and he’s still there. When I hear him, he’s calling out to me and blatantly asking me to look at his hard d*** that he had pulled out of his denim’s zipper area.” 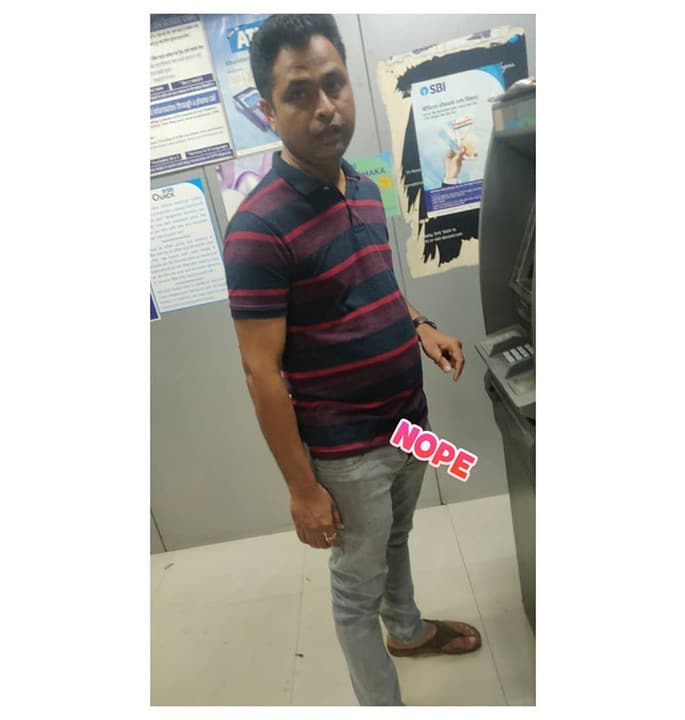 Shibani quietly started to record the incident and turned to shout at him. She pointed her phone at Kumbharkar in a state of undress.

When she told him that she was recording, Kumbharkar began to panic and turned away from the camera before leaving the scene.

“That’s when he freaks out and runs out of the ATM. I run to the cop car and show them the video.”

“They instantly start following the guy who has fled on his scooter.”

The clip went viral and more than 4,000 people commented on the video.

Shibani added: “I don’t know if they caught him, but this experience was so scary. It’s sick that a man felt it was okay to flash me inside an ATM where there are cameras!”

Kumbharkar was caught and Shibani was informed. She saw him crying but she knew she had to take action for what he did.

“So along with my dad, I filed an FIR against him. He claimed to be drunk at the time, which does not excuse his actions at all.”

The Indian man was charged under multiple sections of the Indian Penal Code.

Shibani later took to social media to thank the Mumbai Police for helping her.

“Thank you everyone for such kind words and support. And thank you Mumbai Police for taking immediate action.

“I really hope no one ever has to feel unsafe in a place they call home.”

Dhiren is a journalism graduate with a passion for gaming, watching films and sports. He also enjoys cooking from time to time. His motto is to “Live life one day at a time.”
Pakistani Marriage Dispute leads to Shooting of Family
Indian Woman sold by Father for Rs 10k Gang Raped by Owner