Indian billionaire Mukesh Ambani has become a grandfather for the very first time, a picture of him with his new grandson has gone viral.

Billionaire Mukesh Ambani on December 10, 2020, became a grandfather after his son, Akash Ambani, became a father to a baby boy.

A spokesperson for the Ambani family said:

Shloka Mehta is the daughter of diamond magnate Russell Mehta and Mona Mehta.

The two went to school together at the Dhirubhai Ambani International School and have known each other since childhood.

Akash and Shloka had gotten married in March 2019. 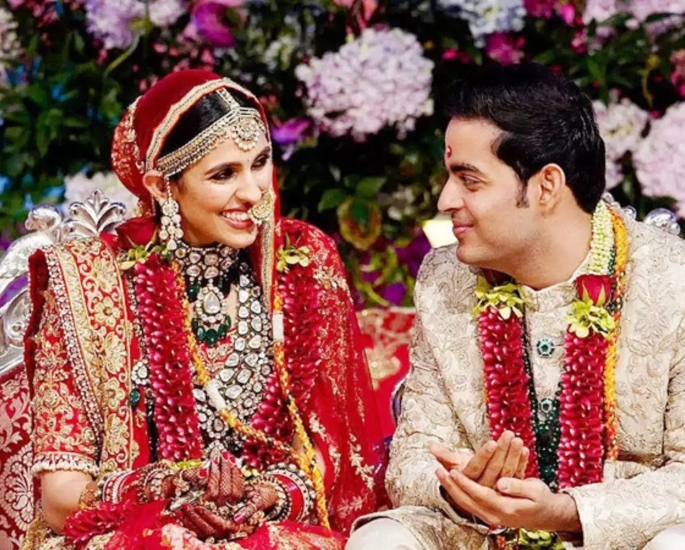 The marriage was preceded by days of celebrations, which began with a “dandiya” night.

A three-day extravaganza at St. Moritz in Switzerland saw The Chainsmokers and Coldplay’s Chris Martin perform to an audience full of Bollywood stars.

This was followed by a carnival bash which was opened to the locals for two hours.

The wedding celebrations were also attended by a vast array of India dignitaries, politicians, film stars, businessmen and cricketers.

Ambani, aged 63, and his wife Nita have three children, twins Akash and Isha, both 29-years-old, and Anant, 25.

The Ambani family is said to have returned to Mumbai just before Diwali in November 2020 after spending considerable time abroad.

“Nita and Mukesh Ambani are delighted to become grandparents for the first time as they welcomed the great-grandson of Dhirubhai and Kokilaben Ambani.

“The new arrival has brought immense joy to the Mehta and Ambani families.”

Both mother and son are doing well, it added.

A picture of grandfather Mukesh Ambani with his grandson has become a viral sensation.

The image has been posted on Instagram by Mumbai-based photographer Manav Manglani.

It shows Mukesh Ambani, all smiles, as he posed for a picture with his grandson at the hospital.

The news has prompted a flurry of congratulatory messages online, even as others lost no opportunity to crack jokes.

“Dhirubhai must be showering his blessings by saying in Gujarati jug jug JIO mara laal.”

Others commented that the 2019 acquisition of British toy retailer Hamleys by Reliance Brands suddenly made a lot more sense.

Hamley's was such an Indian family planning thing.

“Hamley’s was such an Indian family planning thing.”

Akanksha is a media graduate, currently pursuing a postgraduate in Journalism. Her passions include current affairs and trends, TV and films, as well as travelling. Her life motto is 'Better an oops than a what if'.
Ilford Shop Worker sentenced for Killing Two Children
Man jailed for Drug Trafficking & Dangerous Driving