celebrities said that there were no losers

Top Bollywood stars and Sri Lankan cricketers played in the 2010 IIFA Foundation Celebrity Cricket Match on Friday 4th June, in support with UNICEF’s ‘Cricket for Children’ project. The charity cricket match played at the Sinhalese Sports Club, attracted many of the well known names from the silver screen and cricket, onto one pitch.

The match supports a special cause – to rehabilitate Tamil child soldiers and refugees. As a symbol of solidarity with the Sri Lankan people, IIFA in partnership with Habitat for Humanity and the Sri Lanka Tourism Promotion Bureau, will adopt and rebuild a village for refugees. The proceeds from the charity cricket match will be donated to this ‘IIFA Hands for Humanity’ project. The Literacy Partner for IIFA 2010, Linc Pens in association with IIFA is devoted to the cause of literacy and will be donating stationery to the IIFA model village in Sri Lanka. 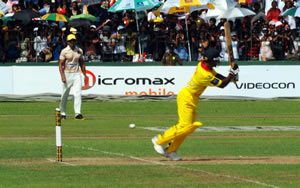 Oscar IIFA challenge foundation cup was awarded to Sangakkara XI. Suneil Shetty XI lost to Sangakkara XI by 141 runs in the first match. The Videocon Man of the Match (Celebrity) was Suniel Shetty and the Micromax Man of the Match (Cricketer) was Kumar Sangakkara. Ace spinner Muttiah Muralitharan was adjudged the best bowler. The Panasonic Best Catch went to Upul Chandana and Sonu Sood was announced as the Western Union Most Reliable Player.

The charity match was a winner for its cause and the celebrities said that there were no losers since the proceeds went to charity. Reebok contributed Rs 5 Lakhs and Coke contributed Rs. 2.5 Lakhs towards IIFA’s charity project, IIFA Hands for Humanity, done in conjunction with Habitat for Humanity.

Although actor Salman Khan was originally to play in the match, he didn’t because was rehearsing for his performance on Saturday for the awards night but he did not to disappoint the jam packed stadium of fans; he came just before the end of the match and took a round of the field giving his fans, a dose of the Salman mania.

Our DESIblitz media team was at the event and we bring you some exclusive photos from the IIFA 2010 charity cricket match.

Special thanks to Surenie De Mel, hip hop and pop star from Sri Lanka for her support.