Chelsea FC’s Search for an Asian Soccer Star programme in May 2010 selected six winners for the next stage of trials. The winner of the Under 9’s category was Adam Aziz. We asked Adam and his family about his selection.

"the trials were quite hard but I'm really happy"

Chelsea Football Club hosted Search for an Asian Soccer Star over the May 2010 Bank Holiday weekend (29-31 May) at the club’s Cobham training ground. The programme designed to breakdown barriers between football and the Asian community, encourages young Asian players to get involved with the game at all levels.

With last year’s first event being a huge success, this year Chelsea expanded the programme so that six young hopefuls playing from Under 8s to Under 13s will join the club for trials. Over 400 players played in six age groups to win the chance to join the Chelsea Academy for their summer trials. 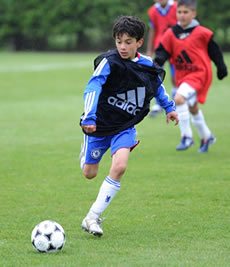 One of the winners to get through to the trails was Adam Aziz. who was born in Southwest London. Adam said, “I’ve been playing for four years, the trials were quite hard but I’m really happy.” He was the overall winner of the Under 9’s whilst Kai Bhullar from Norwich was victorious in the Under 8’s.

Kai Bhullar scouted by several professional clubs, was picked up by Norwich City and has been training with their Elite u7 squad. However, due to FA rules, children can’t be signed until they are u9’s. He recently signed a contract and will play for Norwich FC next year. Norwich are in the same league as many of the London clubs -Chelsea, West Ham, Tottenham, Arsenal etc. So, Kai will now be playing against the Chelsea academy next year.

Manager Carlo Ancelotti of Chelsea FC is behind the scheme fully and encourages young Asian players to join the groundbreaking scheme. He said,

“This is a huge opportunity to come to Chelsea and enjoy the best coaches and the best training ground.”

DESIblitz.com had the pleasure of asking Adam about his love for football and about the trails, and his proud parents, in particular his mother Shamim Aziz about their reaction to Adam’s great achievement so far.

How do you feel to be selected by the Chelsea academy?
I feel great, as I get train with the academy boys in August for the second trail.

Do you think you have what it takes to be a professional footballer one day? How and why?
Yes, because I got selected and I have the skills.

Which players inspire you? Any idols? players you want to meet?
Messi, Drogba and Vanpersie. I would like to meet Lionel Messi the most.

What is your favourite position to play?
As a striker or on the left wing. 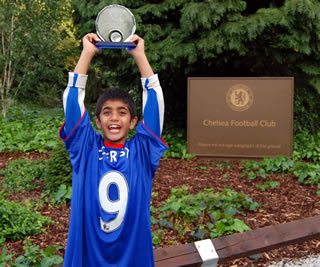 Who has given you support the most and why?
My mum, dad, my brother and sister. Because they all feel I can play well.

What is next now? What will you be doing as part of the selection?
I have to go for more trails on the 10/11/12 August 2010 against the other Academy boys.

We then asked Shamim, the proud mother of how mum, dad and siblings supported Adam through his quest.

When did Adam start showing interest in football?
Adam has always shown to love his football from very early age. We would say from the of the age of 3 or 4, but we never had a clue about which training centre or trials we could take him to. Until this opportunity came along.

Have you encouraged him always or told him to study and get a ‘proper’ job!
We have always encouraged him. We have a 16 year son who is a qualified referee, who trains him on his skills and drills.

How do you feel as a mother?
I’m really proud of my son and all the effort he’s put in. But not just me, the whole family is very proud of Adam. 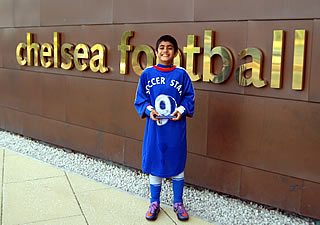 How are friends, family and relatives about the news?
They are very pleased. Most of his uncles and aunties have always pushed me to go further with Adam. So great thanks to them too. His old age granny Aisha, calls Adam as ‘my little Kevin Keegan.’

Have you come across any negativity of any kind? struggles? to help Adam get to where he has?
Adam has been to different academies i.e. Chelsea, Reading, Watford, QPR and Fulham over the last 2 years and has been unsuccessful for whatever reasons, and it affected his self confidence. Then we wondered whether we should continue to pursue trying to get Adam selected. But then we looked at positive side; he was the only Asian during his trails at these academies, and the fact that he was scouted by the clubs to attend the trails. He has made us believe that he has the skills and determination. So, we now continue to pursue.

What do you say to your son to encourage him?
We just encourage to believe in himself and let the feet do the talking.

Do you feel we need more trials like Chelsea around the country?
Yes, definitely, we should have other professional clubs to hold these Asian soccer trails.

How will you support Adam to reach his dreams?
Adam plays in his local team Worcester Parks Colts and plays at an Elite level, and we hope to continue supporting him in every way possible.

Last year’s event was a huge success with two of the three winners now playing at professional club academies. The scheme is still the only one of its kind and is designed to create new opportunities for young talented Asian players with a love of the game.

We wish Adam and all the winners all the best for their fantastic achievement with Chelsea, and hope they continue with their success to become leading footballers in the future.

Baldev enjoys sports, reading and meeting people of interest. In between his social life he loves to write. He quotes Groucho Marx - "The two most engaging powers of an author are to make new things familiar, and familiar things new."
IIFA 2010 Cricket Match a winner
2010 Commonwealth Games in India