Chelsea FC selects its three young British Asian Soccer Stars for their Academy and gives them a taste of the real beautiful game.

Hundreds of youngsters were judged

Chelsea Football Club selected it’s winners of the fantastic Asian Soccer Star competition, which they held in May 2009.

The club teamed up with The FA, Kick it Out and the Asian Media Group to launch the competition. The most talented players in each age category were offered a three-day residential trial at the club’s world-class Academy.

“The Asian Star project has shown that there is a huge passion for football within the Asian community and has created opportunities for young players to get involved at all levels of the game. Above all we hope that it has helped break down many of the perceived barriers between football clubs and young Asian players and look forward to continuing our work next year.”

Hundreds of youngsters were judged on a series of matches and tests specifically designed and used by the Chelsea Academy to demonstrate their speed, skills and ability. 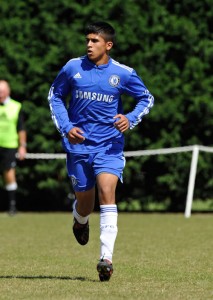 A’ameer Kstantin Murphy (Under 12 winner), Jordan Sidhu (Under 13 winner) and Jhai Singh Dhillon (Under 14 winner) were the ones given a once-in-a-lifetime opportunity.

They joined Chelsea Academy youngsters in training sessions and donned the famous blue shirt for matches at the club’s training ground in Cobham.

Young Jordan took his chance to impress and, under the watchful eye of Carlo Ancelotti, Chelsea’s first team manager, he slotted in well against a strong Swansea team earning an invite to return for further assessments this week. The striker played two further games against our American Superclub partner LAFC and Doverhouse Lions and has already been invited for trials at one of the capital’s Championship teams.

Jordan said of his experience so far, “It’s been good, quite tense but really helpful for me and hopefully for the other boys as well. This is a faster game and you have to be more on your toes and accurate with your passing.”

Due to injury Jhai’s trial had to be postponed but he finally took to the field against LAFC. Unfortunately, a re-occurrence of the injury meant he had to be withdrawn before the end of the game but the young player was still upbeat. Jhai has been given a couple of weeks rest to rehabilitate and will rejoin the Chelsea squad in September. 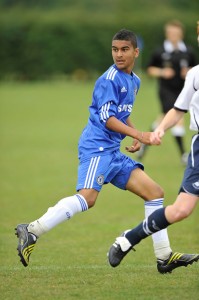 A’ameer, now playing at Under 13 level, was part of a team that also overcame a Swansea squad, He said, “The training session and the match were very enjoyable and I’ve got a good experience out of it.”

A’ameer’s summer of football looks set to continue as two other professional clubs in London have already offered him trials this summer and coach Michael Beale was impressed with the youngster. He said, “He has done well, he came in and is a confident lad and is very helpful. He definitely has the quality to play for an Academy.”

At last, we have some grass-roots development happening in the Premier League to help and recognise the football skills of British Asian youngsters.

Chlelsea FC have demonstrated their commitment to giving the youngsters a full chance to prove their worth on the field. The club has delivered its promise to specifically select young British Asian talent for its Academy.

The rest now depends on their development, attitude and the support given to help them get to the first team level of playing football. Something we hope they will achieve with Chelsea FC and beyond.

Photos courtesy of Chelsea FC. Click on the photos for larger view of players.

Rugby in India
Kickboxing – a Way of Life