Shahrukh Khan after 5 years agreed to attend the 2010 IIFA Awards event this year in Colombo, Sri Lanka. But now will not be at the event as he revealed on his Twitter account.

SRK is quite stressed with all production related issues

After the huge anticipation of the one and only Shahrukh Khan making is presence at the 2010 IIFA awards in Colombo, Sri Lanka, the star has revealed on his Twitter account that he will not be able to make the event.

SRK was to captain the celebrity cricket team at the event and also do a finale performance on stage on the night of the awards.

Many will wonder if too much work for SRK is the reason for not attending the event or is it the prospect of being in the same place as Salman Khan. The news of them both being at the IIFA event made the function even more interesting. And recent comments by both made it pretty clear that there were no plans to patch up their break-up as friends.

So, is this Shahrukh’s way of staying out of the media’s interest in this story of the Khan’s of Bollywood not getting on? Speculation suggests there is possibly more to this than meets the eye.

However, it is known that SRK’s current shoot of his new movie, Ra.One (also called Ra.1) is behind schedule. The movie is an upcoming Bollywood science-fiction superhero film directed by Anubhav Sinha, starring SRK, Kareena Kapoor and Arjun Rampal. The special effects team is being hired from Hollywood for the film and Khan is to perform daring stunts for the film.

Shooting for the Ra.One began in March 2010 and SRK is quite stressed with all production related issues and hence, is required in Mumbai during the time of the awards, thus, tactically justifying his absence from the IIFA event.

madhukarwriter: favourite place is my home/xjobrolovebug: dont think i will be able to come for iifa..too much work here, will miss colombo 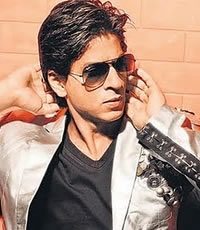 Earlier, Shahrukh also tweeted, ‘i dont think i will be at the cricket match for iifa.’ Therefore, perhaps setting the scene of his planned absence from the 2010 IIFA event. He was going to be attending the awards after 5 years and his appearance at the ceremony, duped as the Oscars of Bollywood, was met by thrill and excitement by the host country Sri Lanka. Who now feel great disappointment in not being able to see the Badshah of Bollywood.

Sabbas Joseph of Wizcraft, the show’s organisers, said, “Stars have their commitments. Hrithik Roshan will now be the captain,”

Hrithik Roshan, therefore, is going to be captaining the star cricket team that will play against cricketers from Sri Lanka to raise funds for charity, and also he’ll be joined by Sunil Shetty.

SRK’s absence is another blow to the event after Aishwarya Rai Bachchan and Abhishek Bachchan announced that they won’t be attending the event which is usually seen as a Bachchan family affair.

News has come out that Amitabh Bachchan will only make a fleeting appearance at the event too, and Lara Dutta, who’s co-hosting the awards, won’t be performing either.

Another Bollywood star not making the 2010 IIFA’s used his Twitter account to tell the world was Arjun Rampal. He said that on account of a previous engagement for a charity event scheduled in Hongkong for the promotion of his forthcoming filmRajneeti, he would miss IIFA 2010.

Interestingly, Amitabh Bachchan has moved onto Twitter too and has found time to extend a congratulations to SRK for reaching 400,000 followers on Twitter. Amitabh isn’t too far behind SRK either, the 67-year-old has just under 100,000 followers himself.

So, it looks like Twitter is fast becoming the source for Bollywood stars to tell the world of their plans and activities. You can check out DESIblitz on Twitter too. Feel free to follow us: http://twitter.com/desiblitz.

Do you think Shahrukh Khan and Salman Khan shoud be friends?

Amit enjoys creative challenges and uses writing as a tool for revelation. He has major interest in news, current affairs, trends and cinema. He likes the quote: "Nothing in fine print is ever good news."
Shahrukh and Salman at 2010 IIFA’s
Winners of IIFA 2010 Awards