Shahrukh and Salman at 2010 IIFA’s

The 2010 IIFA’s brings together two big Khan’s from Bollywood. Shahrukh Khan and Salman Khan are both billed to appear on stage and play together in a charity cricket match. But as to whether this function renews their friendship is another question.

"We are two different personalities"

After a gap of 5 years, Shahrukh Khan will be attending the the 11th International Indian Film Academy (IIFA) Awards 2010 to be held at Colombo (Sri Lanka) from 3rd to 5th June 2010. In fact, SRK will be performing at the event on stage and also taking part in the celebrity charity cricket match during the IIFA weekend.

Shahrukh has hit back at reports that he might not attend the IIFA event due his not so ‘warm’ relationship with IIFA brand ambassador Amitabh Bachchan. Organisers of the event reveal that SRK will be attending and giving the function his full support by performing the grand finale. 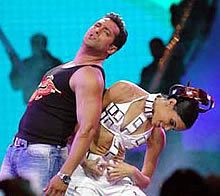 Interestingly, Salman Khan is also to perform at the prestigious awards event. He has been chosen as the IIFA brand ambassador for charity by Amitabh Bachchan and it looks as if he has been finally forgiven by the Bachchan family for his Aishwarya connection from the past. Salman said, “Me Salman Khan, me coming to Sri Lanka very soon on 3rd, 4th, 5th.” He told a press conference that he and Hands for Habit are going to be donating about $100,000 to make about 100 homes in Jaffna.”

When Salman was asked about SRK attending the event and was he okay sharing the same stage, he completely ignored the reporter, turned his face and responded to another question in the press conference and said, “Yes, what were you saying.” Evidently showing that he is still not at all acknowledging SRK in any manner.

Since SRK and Salman are not exactly seeing eye-to-eye since their break up at Katrina’s birthday party, many speculations of how the two will react to each other are doing the rounds.

Shahrukh has said in an interview,

“I do not speak to Salman and also he will not want to speak to me. And this is fine.” 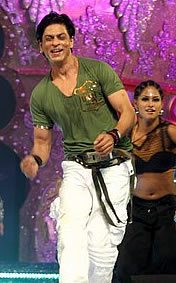 He added, “We are two different personalities. He is fine in his place and I am in mine. There is no annoyance between us or anything else. And it does not mean that either of us are disturbed by it.” SRK made it pretty obvious that he has no plans by changing the status of rift between them. He said, “In public places it can be difficult to avoid each other. And if we do meet, what are we going to say? There is nothing to say.”

Now, the additional masala to this story is that Shahrukh will be the captain of the Indian Bollywood Stars Charity Cricket team that is to play against the Sri Lankan Cricket Team, with one of the celebrity players being Salman Khan. So will the two ‘act’ on the pitch for the sake of the charity match? Or will they make their split still very obvious? No doubt we will find out soon because the match, which will help raise funds for the rehabilitation of former child soldiers, will be played at the Sinhalese Sports Club Ground in Colombo on 4th June 2010. 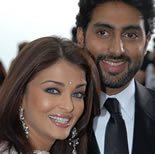 With the Bachchan family always being a strong part of the IIFA event every year, this year Aishwarya and Abhishek will not be present in Sri Lanka. According to Ash’s official spokesperson, “Ash had confirmed her presence at the finals of the French Open Tennis Championships in advance. Her watch brand is the official time keeper of the Roland Garros event and as such, Ash is required to make an appearance.” Abhishek will not be at the event due to clashing shooting schedules for Abhinay Deo’s ‘Game’ in Istanbul. After a short schedule in Greece for the same film, he flew to Cannes for the annual film festival and is now headed for Istanbul.

The IIFA’s seem to be attracting lots of publicity in terms of on and off screen antics this year but we are sure the end result will be a spectacular homage to Bollywood and Indian cinema today. And with Shahrukh and Salman at the event, their performances will be something to look out for.

Do you think Shahrukh Khan and Salman Khan shoud be friends?

Nazhat is an ambitious 'Desi' woman with interests in news and lifestyle. As a writer with a determined journalistic flair, she firmly believes in the motto "an investment in knowledge pays the best interest," by Benjamin Franklin.
Kites to fly high for Bollywood
Shahrukh Khan not @ 2010 IIFA’s