Hardik Pandya and Elli AvrRam the next Cricket-Bollywood Couple?

As star Indian cricketer Hardik Pandya and Bollywood damsel Elli AvrRam have been caught out and about on camera frequently, speculations are rife about them being more than ‘just good friends’. What’s the reality? DESIblitz tries to find out.

"why do I need to clarify anything? By talking about these rumours"

International Indian cricketer, Hardik Pandya, is rumoured to be dating Elli AvrRam of Sweden who currently resides in Mumbai.

Notably, Elli made her Bollywood debut in 2013 as the female lead in Mickey Virus opposite Manish Paul.

The formidable player from the Indian national cricket team, Hardik, and the Swedish Greek model-turned-actress, Elli, have both become the talk of the town ever since Elli attended Hardik’s elder brother Krunal Pandya’s wedding reception in Mumbai during December 2017.

AvrRam posed for pictures during the function. What caught everybody’s attention was one particular group photograph where Hardik stood next to Elli delicately placing his hand around her waist.

Needless to say, this image went viral in no time. 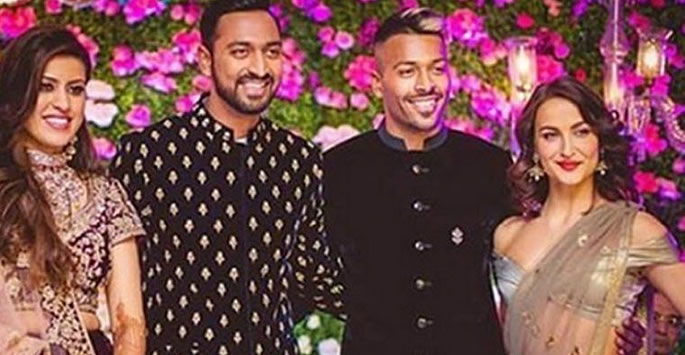 Fans of both these celebrities started guessing if there is a romance brewing between the Mumbai Indians IPL star and the glamorous Kis Kisko Pyar Karoon heroine.

Adding more fodder to the already existing excitement around their supposed love affair the duo was spotted again this time at the airport where onlookers claimed to have seen them hugging each other.

The 27-year-old Bigg Boss 7 contestant had arrived at the airport to drop off her alleged 24-year-old famous sportsman boyfriend as he was due to take a flight.

Elli seemed evidently uncomfortable when the paparazzi started taking pictures of the two. She sat inside a car and frantically tried to hide her face from the cameras.

Recently the alleged couple were again seen together outside a salon. This time too, Elli AvrRam, desperately tried to hide from being spotted by media photographers. She tried to look away and also attempted to tuck behind the driver’s seat. 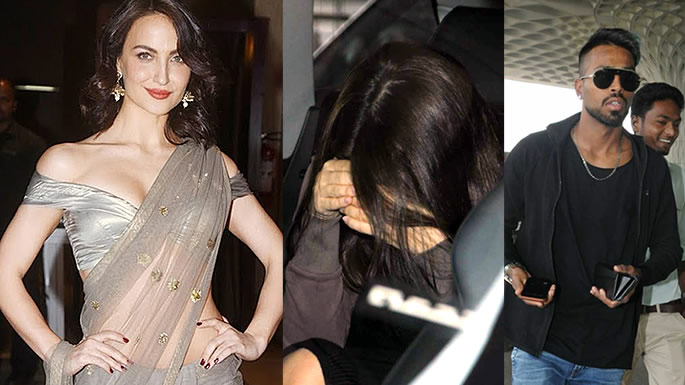 All her efforts proved futile as she got clicked with Hardik anyway and their pictures splashed across different news media platforms.

Interestingly, while Hardik Pandya has remained mum about his exact relationship status with Elli AvrRam, the lady in question has vehemently denied being in a romantic relationship with the star cricketer.

While speaking to Hindustan Times once an angry Elli had fumed saying:

“Let them be curious in life. Why do I need to clarify anything? By talking about these rumours, I’d just be giving more fodder for gossip.”

“Anyway, so many wrong things have been written over the years, but I’ve never gone out and clarified.”

Hardik Pandya was linked to another Bollywood heroine, Parineeti Chopra, previously when he exchanged some banter with the beauty on social media. 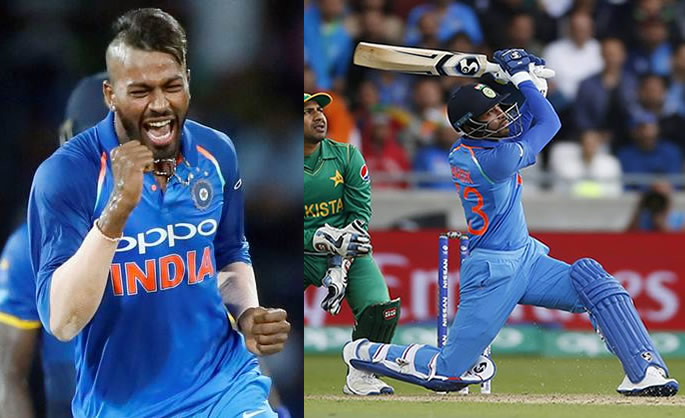 It’s not new that popular faces from the Indian cricket team have been attracted to both established and upcoming Bollywood heroines.

Whether it’s having casual affairs or true passionate love for each other, few men in blue along with their B-Town maidens have always remained in news.

It all started way back in 1969 when legendary Indian cricketer hailing from a royal family, Mansur Ali Khan Pataudi and one of India’s most celebrated female actors of all times, Sharmila Tagore, created headlines by getting married.

A handsome young Nawab of Pataudi and a breathtakingly beautiful Bollywood diva of Bengali descent made for a stunning couple.

Fast forward to recent times, the world witnessed another wedding that grabbed a lot of interest and curiosity from global fans of the cricket and Bollywood fraternities.

More celebrity couples who reiterate the fact that there is a mutual love affair going on between Indian cricket and Bollywood are, Zaheer Khan and Sagarika Ghatge, Yuvraj Singh and Hazel Keech, Harbhajan Singh and Geeta Basra, all of whom are happily married.

While Mohammed Azharuddin and Sangeeta Bijlani, unfortunately, got split.

And, we can’t forget how cricketers MS Dhoni and Yuvraj Singh both were linked to Bollywood’s reigning queen, Deepika Padukone, in the past.

Moreover, it’s no secret that Yuvraj had a steady affair with another Bollywood star, Kim Sharma before he broke up with her and got married to Hazel.

Coming back to Hardik and Elli, are they ‘just good friends’ or indeed lovebirds who are shy of public attention and media glare for some reason?

Will they eventually go the Virat-Anushka way? Or will they keep everybody waiting. Let’s see.

Mariya is a cheerful person. She is very passionate about fashion and writing. She also enjoys listening to music and dancing. Her motto in life is, "Spread happiness."
The British Ethnic Diversity Sports Awards 2018
Indian stars to watch at 2018 Commonwealth Games