Amir Khan met Paulie Malignaggi at Madison Square Garden in New York for his first fight in the USA. Khan proved he was ready for America and won with a much more mature style.

The eleventh round gave Khan his first USA win

The fight started with both boxers finding their feet in round one. Amir Khan’s speed of punches came through but Malignanggi persisted in taking the some of the hits because he is a counter puncher. Khan in his gold and black shorts settled into the fight in round two. Malignaggi wore leapord skin style shorts with black tassels an attire not frequently seen on a boxer. Malignaggi sensed Amir’s ability to strike fast and looked a little weary at times. But nerves seemed to lingering in Khan. 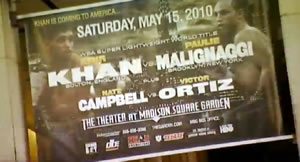 Round three saw Amir of the defensive but still getting his punches through but not on target as he is used to against his opponents. The fight was more technical in the early rounds with a lot of holding on at times, by both fighters. Both boxers had cuts with target punches, in a fight which developed slowly. Both fighters applying caution to their moves and punches.

Round four saw Malignaggi taking more on target hits from Amir but still defending with some counter punches. The crowd were giving mixed reactions with the boxers not being as electric as expected. 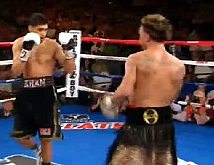 The fifth round saw Malignaggi go to the ground but after a hold from Amir. Amir began to warm up and found his target with punches landing on Paulio but then found himself defending.

Amir Khan showed more technical skills but laid on solid punches in the sixth round. During the round some crowd trouble erupted too in the background. Amir came across stronger with more hits on target, especially, hitting Malignaggi in the head and face, giving Khan the edge in the round.

Both fighters had a more upbeat round in the seventh but Amir once again looked the eager of the two to win points in the round. Paulio came across looking more cautious. Khan’s left hand jabs and punches caught his opponent hard on the right side.

Khan dominating the fight into the eight round and looked the mature fighter. Carefully planting his punches and hits in the right areas of Malignaggi with fast combinations and well timed strikes.

Malignaggi was checked by the referee in at the start of the ninth but the fight continued after he said he was okay to carry on. But Amir still went onto carry on where he left off in the eighth round. However, Malignaggi did retaliate towards the end of the round.

Malignaggi trainer psyched him up before the start of the tenth round to go at Amir with more punches. But Amir held onto his control of the fight, finding Malignaggi coming back at him at times. Khan looked the stronger of the two by this round and was evidently going to hold onto his title. Malignaggi looking tired was trying to hold up at the end of the round.

Doctors and the referee checked Malignaggi before the start of the eleventh round. Malignaggi insisted to carry on. Amir was holding up with no real problems but Malignaggi looked the losing boxer as the referee stepped in and stopped the fight after one minute and twenty five seconds. The eleventh round gave Khan his first USA win. Both boxers met up at the end and showed their sportsmanship with respect for each other straight after the fight in the ring.

Amir said after the fight,

“We stuck to our game plan. Every time I was going into the ring Freddie told me what to do.”

He added that he is not going to leave until he is number one in his division. Paulio said, “Amir fought a very good fight. He was stronger, bigger and faster.” 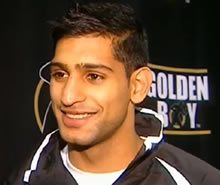 Amir Khan went through a very strict regime of training which impressed coach Freddie Roach. He worked very hard running, sparring and specialised training in the ring. All focusing on making Amir Khan the boxer to look out for in the fight against Malignaggi. Despite Khan not being at home, this was to be his fight to prove that he has world class boxing skills with aims to break into America.

Prior to the fight, during the weigh in encounter at the Essex House in Midtown New York between Malignaggi and Khan on 15th May 2010, a brawl broke-out on the centre stage during the ceremonial photo-op. Amir Khan and Malignaggi faced each other head-to-head when it got out of control. Officials from both camps could be seen grappling and wrestling with a couple of punches thrown. Malignaggi reportedly said something to Khan. Khan retaliated as tempers flared. Khan had more supporters than Malignaggi at the weigh in, including support from dutch bhangra singer Imran Khan. A dramatic build up to the fight.

Baldev enjoys sports, reading and meeting people of interest. In between his social life he loves to write. He quotes Groucho Marx - "The two most engaging powers of an author are to make new things familiar, and familiar things new."
Bachchan and Dhami back Chelsea
IIFA 2010 Cricket Match a winner