Amir Khan won his first welterweight fight after beating Luis Collazo in an unanimous decision at the MGM Grand in Las Vegas. With this victory King Khan could face Floyd Mayweather in the ring.

“One thing about me training with Virgil Hunter. He taught me some things and I put them together tonight.”

British Boxer Amir Khan comprehensively beat Luis Collazo with an unanimous points decision in his first fight at welterweight. The fight took place at the MGM Grand in Las Vegas on 03 May, 2014. Known as King Khan, Amir was making his comeback more than a year after his last bout.

The 27-year-old pride of Bolton showed no mercy as he was back to his best flooring Collazo in the fourth round and twice in the tenth.

Khan believes he has done enough to fight with Floyd Mayweather after winning on the undercard. 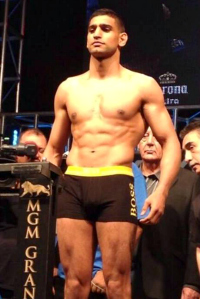 Heading into the fight both boxers weighed in bang on the weight limit of 10st 7lb in front of a 7,000 packed crowd. During the pre-flight talk Khan said:

“This is a big fight for me. He has given a lot of guys a tough fight. We’ve trained really hard for this fight. We are going to be ready come Saturday night.”

Collazo, a career welterweight and former world champion headed into the fight boasting a boxing record of 35 wins from 40 fights, which included 18 wins by knock out. Victor Ortiz was his last victim in January 2014, following a second round knock-out.

In contrast Khan’s record consisted of 29 wins from 32 fights, including 19 knock-outs and 3 losses. His last fight being an unconvincing point’s victory over Julio Diaz over a year ago in Sheffield, England.

It was a rare occasion to see Khan fight on an undercard and in particular to be on the same card as a potential challenger in Floyd Mayweather.

The stage was set as it was time for Amir to stand up, be counted and deliver a message to the American and British fans, the message being King Khan is back. 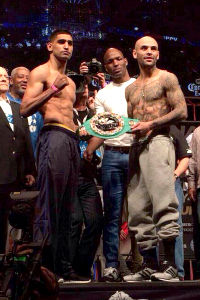 Those who managed to watch the fight witnessed one of Khan’s most impressive performances of his career. As Khan entered the arena, he received a good reception from the travelling English contingent fans and the locals.

Amir Khan was wearing white shorts with purple trim, whilst Collazo was in blue trunks with red trim. The referee for the match was Vic Drakulich from Nevada, USA.

Khan started the fight well using his reach advantage to keep Collazo at a distance. In the second round he stunned his opponent with a straight right and took control of the fight and did not look back.

Khan continued to show his strength, speed and movement. In the fourth round his hard work paid off as he caught his opponent square and landed a cute right hand on the inside, which sent Collazo crashing down to the floor.

Round five and six were pretty much the same with Khan spinning out of trouble and hitting Collazo with quick, slick combinations. This was truly an awesome performance. 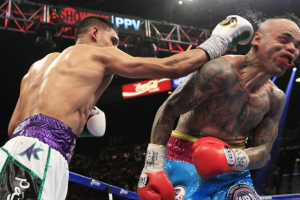 Collazo tried to battle but it was a war he was not going to win and Khan just kept him at bay.

In round eight, a frustrated Collazo was deducted a point for a low blow, but he came back with a blistering left cross that left Khan shocked. The Englishman also had a point deducted after pushing his opponent down.

In the tenth round the fight was all but over as Khan landed a left uppercut and, which sent Collazo down to a standing eight count. Khan continued with a barrage of punches and again put Collazo on the floor. Khan looked to finish the fight as Collazo hanged onto the ropes.

In the penultimate round, Khan carried on moving and jabbing whilst his opponent was throwing desperate single shots in the hope that one would connect.

The final round was more about seeing the fight out. Even though Khan received a low straight punch, which hurt his groin, he continued to jab, jab right until the round was over. 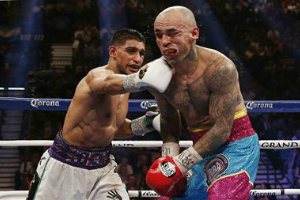 Both fighters gathered in the middle of the ring as the inevitable verdict was delivered. It was a well-deserved landslide first welterweight victory for Khan. All three judges impressed by Khan’s show, awarded him an unanimous decision.

This victory puts Amir Khan back on track for the dream fight he has been wanting with American legend Floyd Mayweather.

In the post-fight interview with Showtime, Khan said: “Styles make fights and I really believe I have the style to trouble Floyd Mayweather.”

Maidana dominated the earlier rounds, but Mayweather fought back and was awarded the win by two of the judges. Mayweather received 117-111 and 116-112 points in his favour with the third judge scoring a draw at 114-114.

The night however belonged to Amir Khan as he displayed a vast improvement in offence and defence. He will now be potentially focusing on his biggest ever pay day and a money spinning bout with Mayweather.