The world of 3D printing has become more innovative and in the automotive industry, the world’s first 3D printed motorbike has been unveiled.

“We engineered NERA e-Motorbike from the ground up"

The NERA e-Motorcycle is the world’s first 3D printed motorbike and one of the finest examples of additive manufacturing.

This area has gone from state-of-the-art prototype components to having fully 3D printed vehicles.

Printing a motorbike is another milestone for additive manufacturing and the automotive industry.

The motorbike was designed by Marco Mattia Cristofori and Maximilian Sedlak while BigRep’s innovation team NOWlab created the vehicle.

Apart from some of the internal components, it is fully 3D printed.

The NERA e-Motorcycle is flexible, absorbs bumps better than the majority of other motorbikes and uses just 15 parts to form the final product.

It has set the foundation for what can be created, although the NERA e-Motorcycle is not yet available.

The NOWlab team had the primary goal of creating a functional prototype that revolutionised motorcycle mobility and did so using 3D printing techniques.

A BigRep source said: “We engineered NERA e-Motorbike from the ground up, disrupting traditional design, engineering and production in every aspect.

“The result is a 100 per cent, customisable, functional prototype, designed and produced with more time and cost efficiency than previously imaginable.”

BigRep added that 3D printing “changes the perception of design language and allows total freedom in terms of design: bionic, organic, edgy. Any design is only one thought away from reality”.

“NERA illustrates the massive benefits that 3D-printing offers for the production of end-use parts, particularly for batch sizes between lot size one [small quantities manufactured in a single production run] to small series, by reducing lead times and costs, optimising supply chains and limiting dependency on supplier networks.”

The motorbike was 3D printed using the fused filament fabrication (FFF) process. This involves a continuous filament of thermoplastic material being fed through a moving, heated printer extruder head.

The 3D printed motorbike is a revolutionary approach to product development in the automotive industry and other sectors. 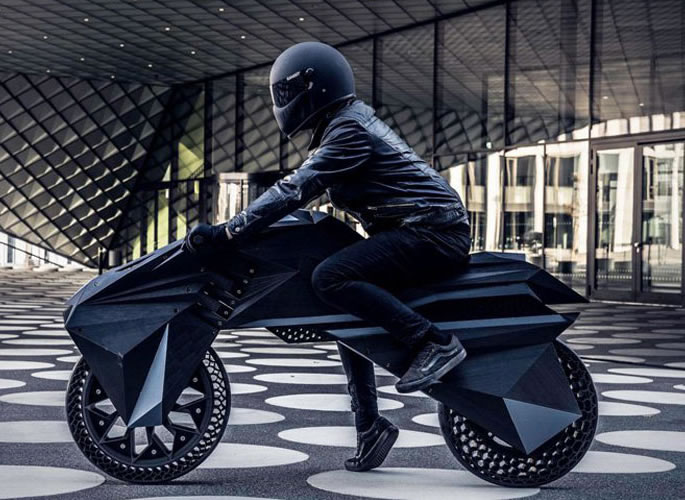 In the future, other design labs, universities, automotive companies and even at home enthusiasts may start to pursue 3D printing their own vehicles.

Designers, doctors and even architects have applied the bike’s design techniques to a number of products, from a steel bridge to models of patients’ hearts that are used to plan surgery.

MIT have adopted the technology to create 3D-printed inflatable structures for car interiors that could transform into different configurations with one click.

Applying additive manufacturing to the automotive industry brings a number of benefits.

Car manufacturers like Audi and Porsche are already adopting 3D printing techniques to design and produce their latest cars.

Although the NERA e-Motorcycle is not available on the market yet, 3D printed motorbikes will be released in the future.