A picture has gone viral of Aamir Khan and Fatima Sana Shaikh, prompting rumours that they have married, but is it all it seems?

"we will find that this is true."

It is heavily rumoured that Aamir Khan and Fatima Sana Shaikh have tied the knot.

This comes after a picture of them went viral on social media.

The picture shows Aamir and Fatima at an event together, with vermilion on Fatima’s forehead.

The post claimed that the two actors secretly got married and some social media users believed the rumours. 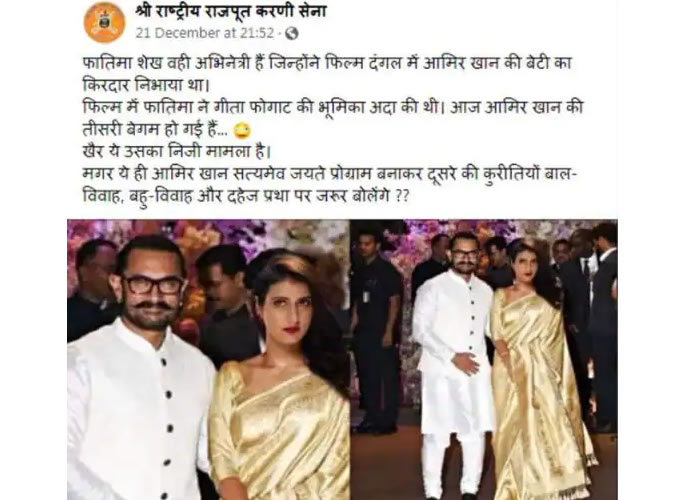 However, the picture is not as it seems and it was revealed to be an edited photograph.

The picture is actually of Aamir Khan and his ex-wife Kiran Rao when they attended Akash Ambani and Shloka Mehta’s engagement.

Fatima’s face had been photoshopped onto Kiran’s body.

Despite the revelation that the picture is fake, some people believe that the pair are in fact, in a relationship.

One person said: “Photo could be fake… but the marriage may be real. He is the biggest hypocrite.”

Another stated: “Haha… Similarly fake was the rumours of Kat and Vicky being engaged.

“Very soon we will find that this is true.”

Aamir Khan and Kiran Rao had jointly announced their divorce in July 2021.

Part of their statement read:

“In these 15 beautiful years together we have shared a lifetime of experiences, joy, and laughter, and our relationship has only grown in trust, respect, and love.

“Now we would like to begin a new chapter in our lives – no longer as husband and wife, but as co-parents and family for each other.”

They added that they would co-parent their son Azad.

But this led to many people claiming that Aamir’s Dangal co-star Fatima Sana Shaikh was responsible for the divorce.

Despite Fatima denying the speculation, many believe the pair grew close on the set of Thugs Of Hindostan.

One person had said: “This is horrible, this guy made 3 Idiots, TZP, Dangal etc to inspire the youth, heard he is going to marry Fatima, that’s why he divorced with Kiran, we are ashamed of you, Aamir.

“I feel guilty that I have watched your movies, will boycott everything now.”

Another said: “Congratulations in advance Aamir and Fatima Sana Shaikh. Hope it will last a long time #AamirKhan.”

One person at the time even said that Fatima and Aamir would get married.

Dhiren is a journalism graduate with a passion for gaming, watching films and sports. He also enjoys cooking from time to time. His motto is to “Live life one day at a time.”
Karan and Tejasswi’s Fight Escalates in Bigg Boss 15
Hira Mani trolled for Viral College Performance