‘Gulabo Sitabo’ tells the Parable of Greed versus Love

Gulabo Sitabo stars Amitabh Bhachan and Ayushmann Khurrana in very satirical roles in a film which tells the parable of greed and love.

Both Mirza and Baankey want the other out of the haweli

Bollywood film, Gulabo Sitabo, is the first major movie to get a direct-to-digital release. Starring Amitabh Bhachan and Ayushmann Khurrana in lead roles, it was released on Friday, June 12, 2020, on Amazon Prime.

The film directed by Shoojit Sircar is a somewhat satirical drama which cunningly portrays how greed and love play a role in the lives of two humans who oppose each other, Mirza (Amitabh Bachchan) and Baankey Rastogi (Ayushmann Khurrana).

Amitabh Bachchan’s caricature is helped with heavy prosthetics to portray his role as a much older Muslim man. Bachchan complements his incredible acting ability, facial expressions with this look to make us completely believe in his character.

Speaking about him being selected for the role of Mirza, Mr Bachchan said:

“GiBoSiBo came to me from Shoojit Sarkar, and when he chooses for me I never disagree, I follow him blindly, and go along.” 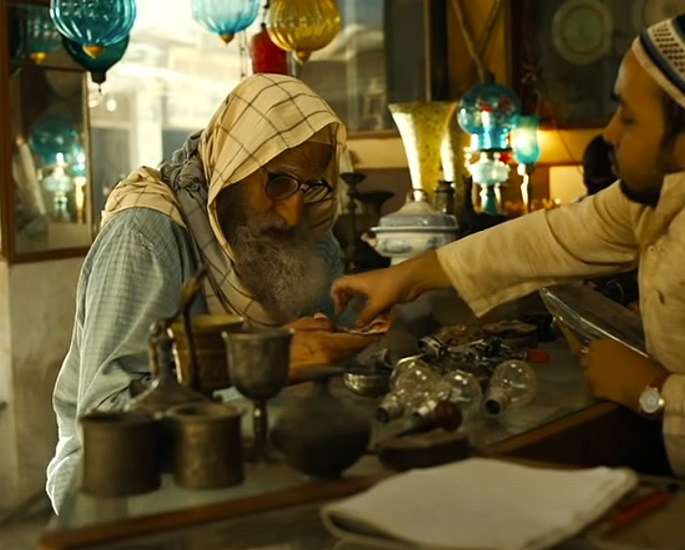 Mirza is a greedy old man who is completely obsessed with the ‘haweli’ he lives in, which is Fatima Mahal, a 100-year old palace in Lucknow, owned by primarily by his Begum (Farrukh Jafar), to which he has a right to as well being her husband.

Whereas, Baankey Rastogi, is a tenant of Mirza’s but is himself a young man struggling to make money in a self-owned flour mill to feed his family which are a mother and three younger sisters.

Mirza eloped with Begum when they were younger and married her after she was meant for another, and since then, they resided in this haweli, which is now dilapidated and crumbling.

The tenants including Baankey and his family pay less than Rs 100 rent to Mirza, who is constantly trying to get money from anyone in any way possible.

He sells used lightbulbs, chandeliers from the haweli to local pawnbrokers and is seen even collecting the takings of a puppeteer who is performing a scene with ‘Gulabo’ and ‘Sitabo’ two very different women in a scene, which connects the film to its title.

Baankey and Mirza are always seen bickering and at loggerheads with each other in the story.

However, their real love is for the haweli and how to fight for it, in their separate own ways.

Baankey starts collaborating with a heritage site administrator (ASI officer), played by Vijay Raaz, who wants to hijack the property as a government site but really for a minister, while Mirza embarks on a titillating journey with a lawyer played by Brijendra Kala, to help him secure the property as his. 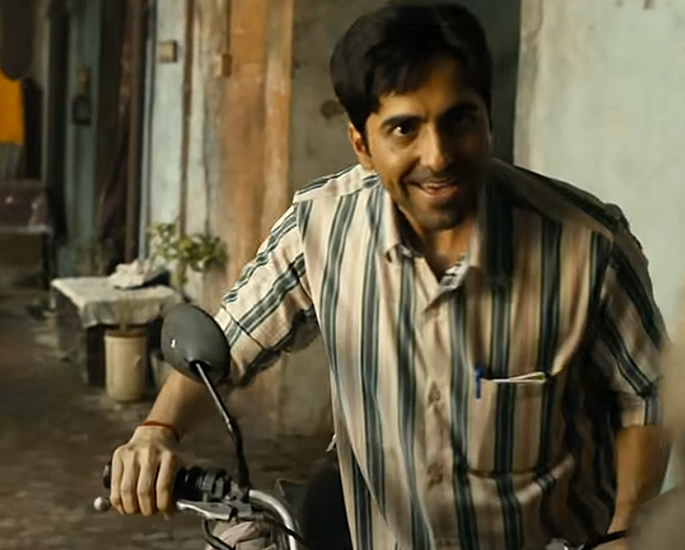 However, a sticky point for Mirza is Begum, she is still alive and the rightful owner of the palace, which forms the central struggle for Mirza to beat, even to a scene where he is seen using her incorrect thumb with ink to sign a power of attorney while she sleeps!

Another character who adds to the war of greed and love is the character of Guddo, played by Srishti Shrivastava, who is the elder sister of Baankey. She tries to educate Baankey and the tenants on their legal rights and even ends up working for Mirza’s lawyer.

Not completely righteous, Guddo is also seen to be a love interest for three boyfriends, who she entertains on rooftops of the haweli, and also seen in a funny scene trying to woo the heritage ASI officer in a secret meeting with sexual favours which he comically rejects.

Baankey has a love interest as well, who whats to see him find the courage and money to marry her and meet her expectations in a man. 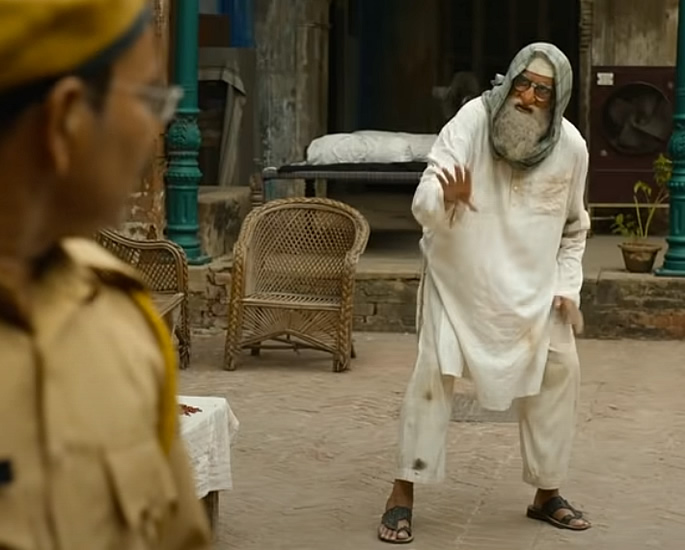 Both Mirza and Baankey want the other out of the haweli so one of them can live there forever further to the help of their selected counterparts.

However, the plot completely has a twist which is unexpected at the end with Begum seen as the person with the most clout and ingenuity.

Gulabo Sitabo written by Juhi Chaturvedi nurtures the characters in the story very nicely intertwining them into a parable which is about greed and love and shows how characters like Mirza and Baankey can fight for something which may not even be theirs to have.

Music in the film albeit is minimal and in the background features songs which are fitting. The background music nicely adds to the satire mood of the film.

Cinematographer Avik Mukhopadhyay conveys the beauty of the Fatima Mahal with character and allure, which is a real historical building in Lucknow.

While some may argue that the film is slow to establish plotlines and situations in the movie, Gulabo Sitabo is a refreshing watch from the more modern and upbeat Bollywood movies which show very little of the realms of typical life in India when it comes to characters like Mirza and Baankey and a fight over property. 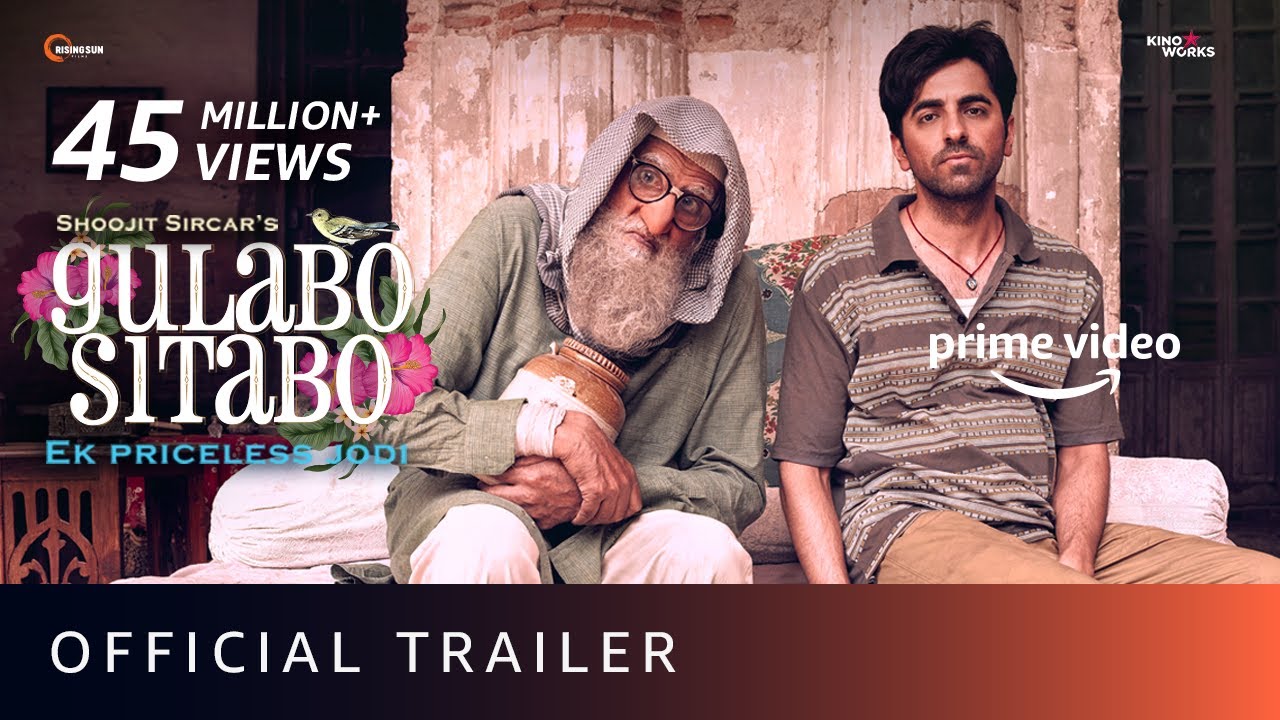 Nazhat is an ambitious 'Desi' woman with interests in news and lifestyle. As a writer with a determined journalistic flair, she firmly believes in the motto "an investment in knowledge pays the best interest," by Benjamin Franklin.
Disha Patani celebrates Birthday with Rumoured BF Tiger
Actor Sushant Singh Rajput commits Suicide