Indian boxer Neeraj Goyat has said he is ready to face Amir Khan. Neeraj called out the British boxer on Twitter, referring to himself as a gangster.

"I am fit now and ready to beat Amir Khan in the ring."

Indian boxer Neeraj Goyat has taken a bold approach in his bid to secure a bout with Amir Khan, even calling himself a “gangster”.

Khan and Goyat were scheduled to face each other on July 12, 2019, in Saudi Arabia, in what was billed as ‘India vs Pakistan’.

Khan had said that he would win the fight as a way of avenging Pakistan’s loss to India in the Cricket World Cup.

“Pakistan lost to India today in World Cup. Come July 12th, I will avenge the loss and knock out Neeraj Goyat on our upcoming fight in Saudi Arabia.”

Goyat fired back, saying: “In your dreams.”

However, the bout was cancelled after Goyat was involved in a car accident.

Goyat suffered serious injuries to his head, face and arm but has now fully healed. He is determined to face Khan and posted a unique callout on social media.

The Indian boxer wrote: “I am fit now and ready to beat Amir Khan in the ring.”

Neeraj showed off a different set of weapons to his fists as he was sitting with a collection of guns and boxes of bullets.

The message was also accompanied with several hashtags, including one towards the World Boxing Council (WBC) and one where he appears to call himself a gangster. 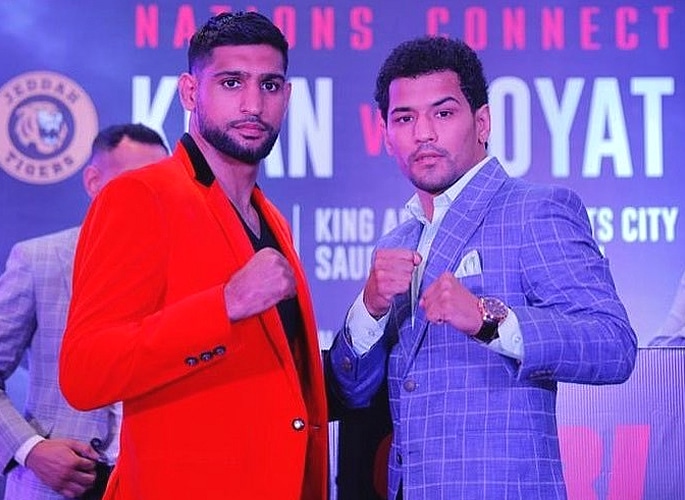 The originally scheduled bout would have seen each fighter proudly representing their country and would have been bankrolled by wealthy backers.

Neeraj’s callout is bound to attract attention and may even lead to a response from Khan.

Amir had said that he views the fight as nothing more than a “tune-up” and was intending to use the bout as a way of getting a high profile fight against Manny Pacquiao or Kell Brook.

It would have also erased the memories of his sixth-round defeat to Terence Crawford in April 2019.

Neeraj has 11 wins, three defeats and two draws to his name. He also has a 2-o record in MMA. However, he has not faced the same level of competition that Khan has.

According to Russia Today, he is aware that a good performance would skyrocket his career.

Dhiren is a journalism graduate with a passion for gaming, watching films and sports. He also enjoys cooking from time to time. His motto is to “Live life one day at a time.”
Euro T20 Slam Cricket League 2019: Season 1
Pakistani Cricketer Hasan Ali to Marry Indian GF Shamia Arzoo