After Amir Khan was robbed of his £72,000 watch at gunpoint, his wife Faryal Makhdoom posted CCTV footage of the incident.

"How did they know we'd leave the Sahara Grill"

Faryal Makhdoom has posted CCTV footage of the robbery in which her husband Amir Khan had his £72,000 watch stolen at gunpoint.

The couple had been out in East London on April 18, 2022, when two masked men confronted Amir.

The boxer had a gun pointed at his face before the thugs stole his Franck Muller Vanguard Chronograph watch and escaped while distraught Faryal looked on.

Faryal Makhdoom has now posted footage of the incident and she believes the robbery was premeditated.

Footage showed two men getting out of a Mercedes “the moment” Amir and Faryal left the Sahara Grill in Leyton.

The men are seen approaching Amir before quickly running back to the Mercedes.

Faryal said: “To the selfish guys who pointed a gun at my husband’s head and risked everything, risked our lives all for a fricking watch, I say to you: Shame on you.

“How dare you pull that stunt on two parents all for a watch.

“Amir is so good to his fans, and he’ll stop for photos and stuff like that.

“But I had told him: You can’t just stop for anybody on the street, especially if you’re so well known. You have to be careful about who you stop for. You don’t know who these people are or what their intentions are.

“They must have decided to steal Amir’s watch because he’ll wear T-shirts in photos that he puts on Instagram, and so it’s visible on his wrist.

“But what I can’t work out is: How did they know we’d leave the Sahara Grill when we would? How could they have possibly known we would come out when we did?”

Hours before the incident, Amir was pictured with a fan wearing the flashy watch, which is studded with 719 diamonds.

Faryal Makhdoom continued: “The two guys jumped out of the car.

“I was just a little bit behind Amir, so I didn’t really know what was happening to start with.

“But then I realised that the guy closest to Amir had put the gun up to his head, and a second guy behind him was also carrying a gun.

“It was so so scary, afterwards I was just screaming. Amir really had to calm me down.

“He told me afterwards that the guy had told him: Give me your watch or I’ll shoot you.

“Amir said that he might have tried to have taken the gun out of his hands, but quickly saw the guy behind him was also carrying a gun. And he just couldn’t risk doing anything.

“When you’re a parent, you can’t risk doing anything that would put yourself in harm’s way like that. But these guys just didn’t seem to care about that. What would make a person do that? How could they do that to us? All for a watch?

“Honestly it has made me think about getting more security.

“That’s not something I’d have considered before, but it’s just so dangerous out there.

“Police are really trying, they’ve been supportive and we’ve given them CCTV of the robbery.

“We’re just trying to get all this out there so we can find these guys as soon as possible.”

Watch CCTV Footage of the Robbery 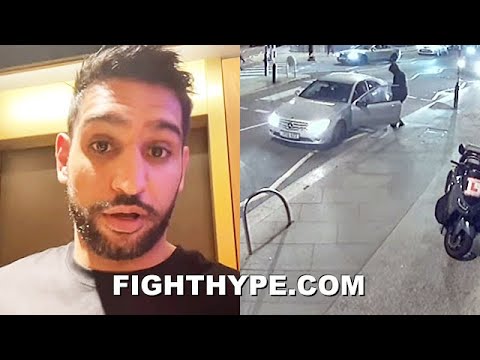 Amir Khan has now spoken about the ordeal, saying:

“It was dark, this masked man came up to me and at first, I thought it was a friend playing a practical joke.

“But then he pulls out a gun and shoves it right at my face and I thought: ‘This is the end; I’m going to die’.

“I was in genuine fear for my life and the main thing that I was thinking about was my wife and kids. I thought I might never see them again.”

Amir considered disarming and hitting his attacker but the thought of Faryal and their three children prevented him from taking action.

He told the Daily Mail: “I could have easily hit him, and I did think about it for a brief moment.

“But then I knew Faryal was with me, and he could have killed her, never mind me.

“It was all over very quickly. The attacker just shouted: ‘Give me your watch’.

“I tried to remain calm, didn’t speak to him and just slipped it off my wrist and handed it over.

“This whole thing has left me and Faryal very shaken up and scared.

“You don’t expect to be robbed at gunpoint, not in London. That’s the kind of thing that happens in the US but not in England.

“I’m lucky to be alive and once the robbers fled, I just wanted to hug my wife and kids.

“The thought of my family stopped me from taking them on because if I had, I could be dead now.”

“100% this whole attack was premeditated. I was specifically targeted, the robbers knew where I was and were alerted to this by somebody who knew my movements.”

Amir believes he knows who orchestrated the armed robbery and has informed the police.

“He’s from the East London area and sees himself as a gangster. I’ve given the police his name and hopefully, they will be taking action very soon.

“I’m sick of all this gangster stuff.

“That is not my world. I’m a hard-working family man who wants to earn good money and live a decent life. I didn’t deserve to be robbed like this; nobody does.

“Somebody who was part of my inner circle did this to me.

“He’s threatened me in the past and he’s been going around bragging that he ordered the hit on me.”

Dhiren is a journalism graduate with a passion for gaming, watching films and sports. He also enjoys cooking from time to time. His motto is to “Live life one day at a time.”
Brothers go from Selling Fragrances from Boot to £10m Empire
Harpreet Kaur on The Apprentice, Lord Sugar & Oh So Yum