Bollywood has built a reputation on presenting epic love stories, but gay themes are not frequently explored. Let’s take a look at 10 great films that do.

"If someone is a certain way, he or she just is."

Bollywood is famous for its grandeur when it comes to romance flicks. But they do not explore gay themes that often.

India was once considered a land of free love, with Kamasutra texts dedicated to homosexual eroticism. Though certain historical eras and practices shaped views on homosexuality.

Section 377 of the Indian Penal Code came into effect in 1864 during the British colonial rule. The code banned sexual acts “against the laws of nature.”

In September 2018, the Indian Supreme Court took a huge step in decolonising by lifting the ban.

Despite many Indians holding conservative views, Bollywood has managed to produce some great films that highlight gay themes.

Let us take a look at some of the films that went above and beyond to reject Bollywood’s heteronormativity. 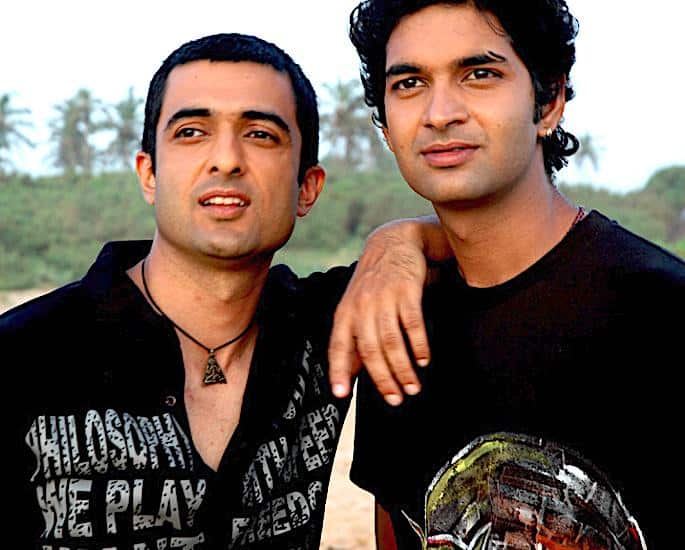 My Brother… Nikhil brings to light homosexuality and HIV/AIDS awareness.

The film is loosely based on Dominic D’Souza, an Indian AIDS activist who was once arrested and quarantined.

Onir, an openly gay filmmaker is the director of the film. The film set between 1986 and 1994 is about a champion swimmer in Goa, Nikhil Kapoor (Sanjay Suri).

One day, he is diagnosed with HIV, which results in him being expelled from the swimming team and disowned by his family.

He has a strong relationship with his sister, Anamika (Juhi Chawla) who stands by him during tough times.

Under the Goa Public Health Act, Nikhil is arrested and kept in isolation. Anamika and Nikhil’s boyfriend Nigel (Purab Kohli) work with a lawyer to have him released.

Watch the Trailer for My Brother… Nikhil here: 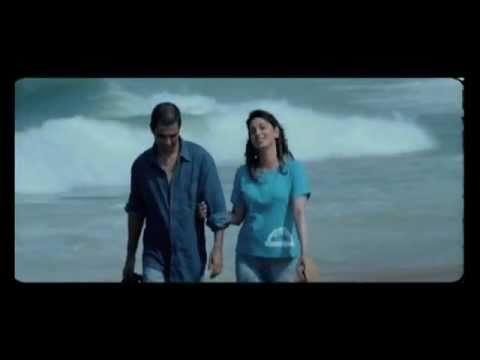 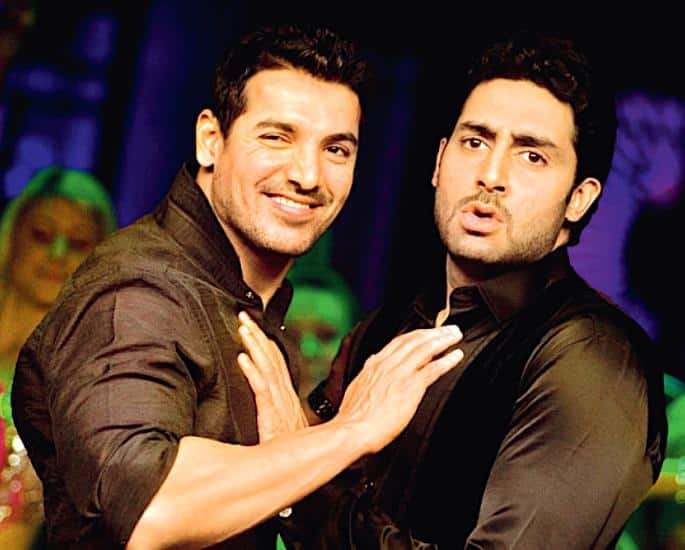 The comedy Dostana is inspired by the Hollywood film, I Now Pronounce You Chuck and Larry (2007), starring Adam Sandler and Kevin James.

However, Neha Melwani (Priyanka Chopra), the landlady who lives there with her aunt (Sushmita Mukherjee), rejects them as they prefer female housemates.

Sam and Kunal devise a plan to pretend they are a gay couple but instantly regret it when they meet Neha as they both fall for her.

“I am glad, for the first time in Indian popular cinema, gays were not turned into caricatures and made fun of.

“What the film has done is to bring to notice gays as a concept in [the] Indian family.”

Karan Johar, who produced the film, explained to Filmfare:

“The film brought the conversation of homosexuality into the drawing room of every urban home.

“Acceptance is still a long way but at least we’re aware. That’s the first stage.”

Dostana (2008) is considered one of the first mainstream Bollywood movies to deal with gay themes.

Audiences liked the film for its playfulness towards homosexuality, especially as it was not stereotypical.

Watch Sam and Kunal Fake their Romance in Dostana here: 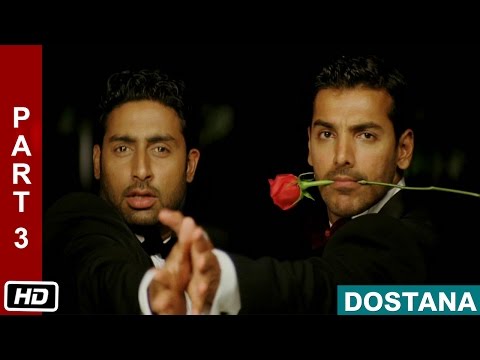 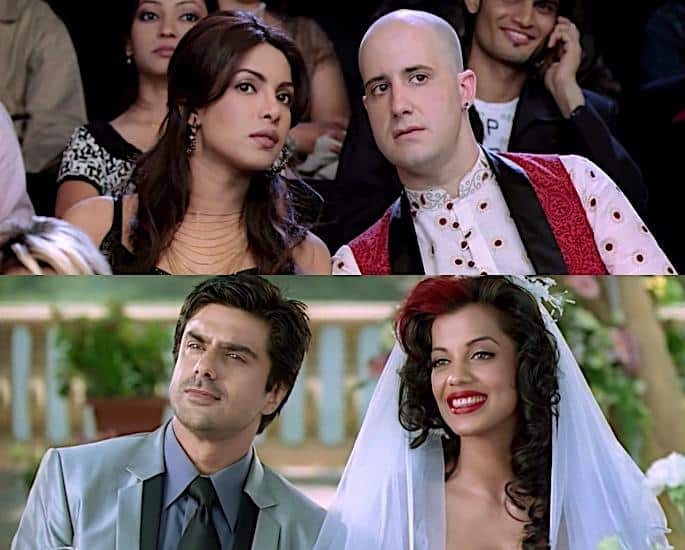 Fashion is a unique film that offers an insight into the ruthless fashion industry. The film looks at a variety of topics such as drug addiction, alcoholism, class and sexuality.

Meghna Mathur (Priyanka Chopra) aspires to become a fashion model so she relocates to Mumbai. Here, she meets an old friend, Rohit Khanna (Ashwin Mushran), an aspiring fashion designer who is openly gay.

Eventually, the designer settles for a marriage of convenience with Janet Rahul Arora (Mughda Godse) in order to fit societal norms.

“Fashion is an easy watch because the very subject lends itself to so much interest.”

“Like the director’s own film Page 3 it is mostly sensational and on several occasions compromises authenticity for the sake of exaggerated drama.” 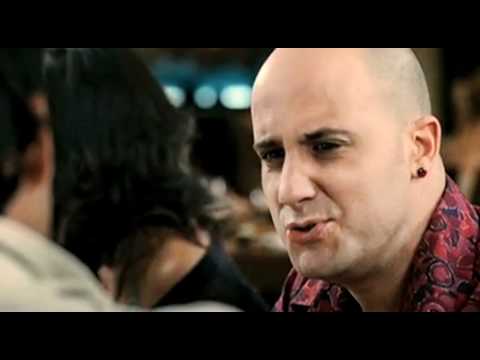 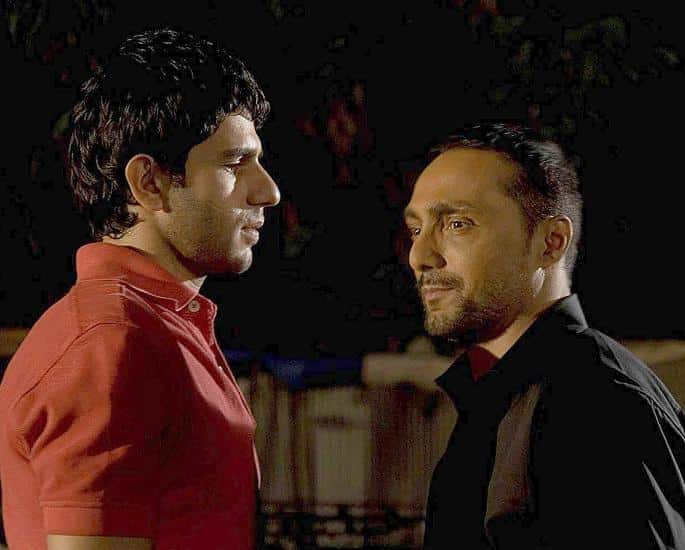 Another direction of Onir, I Am (2010) is an anthology film consisting of four short films. Each story has a common theme of fear.

Abhimanyu (Sanjay Suri) is a director who mentally suffers from the sexual abuse he endured as a child.

During the film, Abhimanyu comes into conflict with his sexual orientation.

‘Omar’ is inspired by materials provided by the Indian LGBT site, Gay Bombay. The short film is about Jai (Rahul Bose) who becomes smitten with a struggling actor, Omar (Arjun Mathur).

The two have dinner together, before having sex in a public environment. However, they are caught by a corrupt policeman (Abhimanyu Singh) who threatens to arrest the two men under Section 377 of the Indian Penal Code.

The exploration of the film’s themes and content impressed many with its hard-hitting storylines.

“I AM, based on true stories and bona fide incidents, entertains, engages and enriches those thirsting for intelligent, sensible cinema.

“It is daring films like these that originate legal, social and political change in society.”

“A motion picture of major significance, I AM will also be remembered because it’s the first of its kind on the Hindi screen.”

Disclaimer: I Am features sensitive topics including sexual assault. 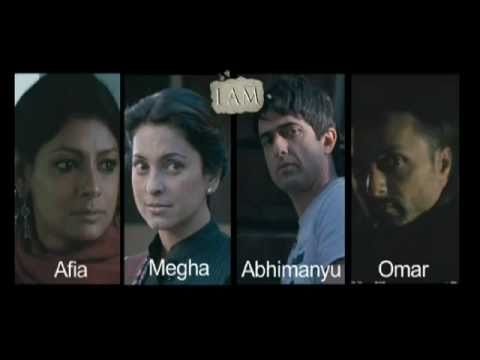 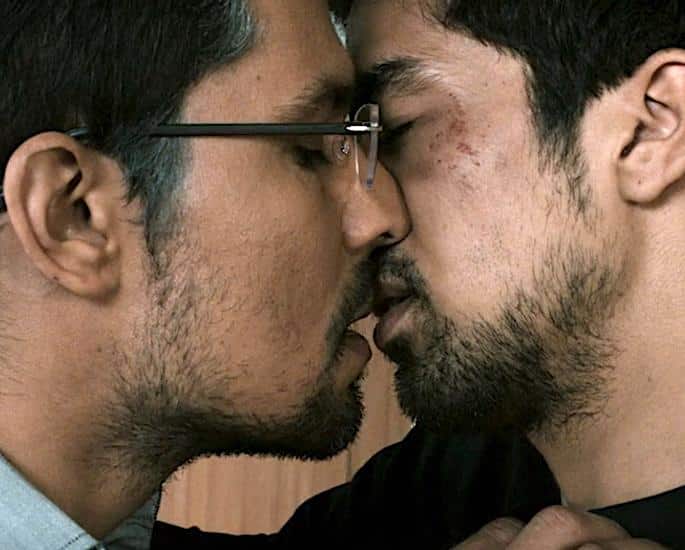 Avinash leaves his home for a fresh start, after years of abuse at the hands of his homophobic father.

He begins a new internship at a magazine company where he befriends colleague, Gayatri (Rani Mukerji).

Gayatri invites Avinash to her house for dinner. He meets her husband, Dev (Randeep Hooda) who is a closeted homosexual.

During the film, Avinash and Dev share a passionate kiss which sparked a mixed conversation about gay roles by the media.

Saqib Saleem talks about his role with the Times of India, saying:

“I am an actor so I have to do my work and going beyond societal norms.”

“I wanted to play that character well so that it doesn’t portray homosexuals in a negative light.”

“I had a lot of discussions with Karan and my gay friends on how to showcase a particular scene on-screen.”

The film also sheds light upon the dark reality of closeted abusers. 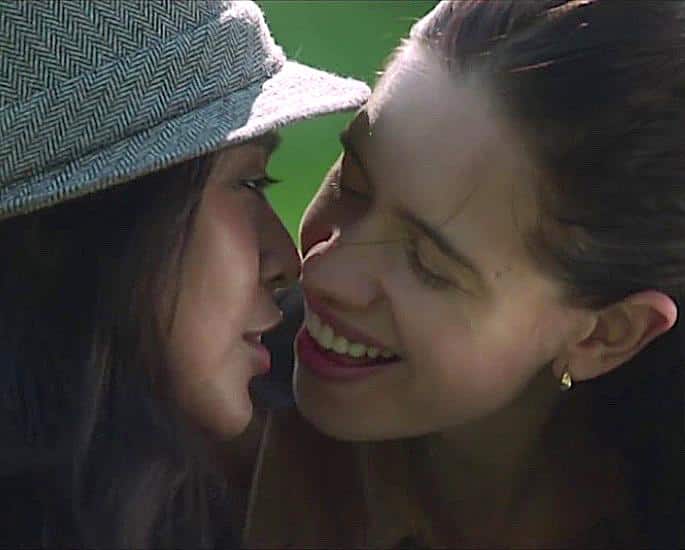 Shonali Bose, director of Margarita with a Straw is bisexual. The film follows Laila (Kalki Koechlin), an Indian student at Dehli University with cerebral palsy.

Laila is ecstatic upon gaining a scholarship to New York University for a semester.

She moves to Manhattan, New York, the USA with her traditional Maharashtrian mother. Whilst there, she develops feelings for her assigned study partner, Jared (William Moseley).

She also falls in love with a Pakistani-Bangladeshi blind girl, Khanum (Sayani Gupta). Khanum is an activist whose confidence and independence is admired by Laila.

Laila becomes confused about her sexual orientation as she is deeply in love with Khanum, whilst also attracted to Jared. After beginning a relationship with Khanum, Laila has sex with Jared.

Margarita with a Straw received critical acclaim with Koechlin’s portrayal of Laila being the highlight of the film.

Koechlin underwent months of preparation with therapists and training with veteran actor, Adil Hussain in order to nail her character.

“”Margarita with a Straw” is tbh (to be honest) the only honest interpretation of disability + queerness i’ve ever seen and it’s on Netflix and everyone ever needs to go watch it.”

"Margarita with a Straw" is tbh the only honest interpretation of disability + queerness i've ever seen and it's on Netflix and everyone ever needs to go watch it.

Bose’s own bisexuality provides authenticity to the direction of the film. Her experiences translate to the screen very convincingly.

Watch the video song. ‘I Need A Man’ from Margarita With A Straw here: 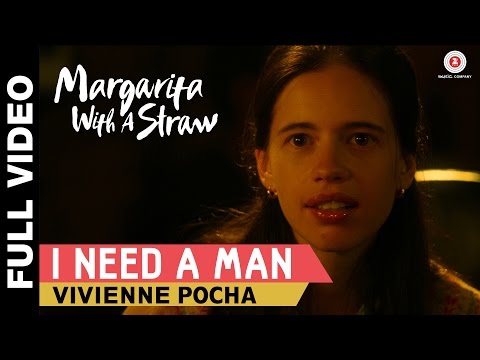 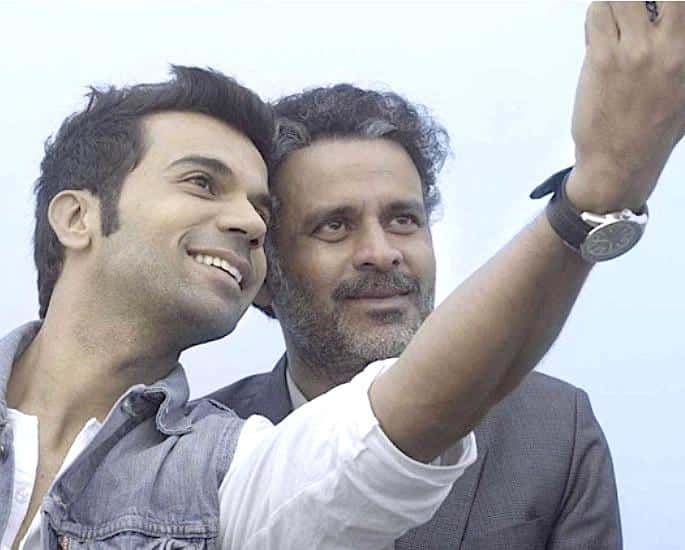 He was the head of the Classical Modern Indian Languages Faculty at Aligarh Muslim University in Aligarh, Uttar Pradesh, India.

A local news team force their way into his home. They catch him on camera having sex with a rickshaw puller. Subsequently, the university suspends him.

Bollywood actress, Kangana Ranaut who watched Aligarh at the Mumbai Film Festival in 2016 had good things to say about the film:

“This is the best film I have seen in the past 10 years.”

“And it’s very good for our society. Just like medicine, which may be difficult to take but should be taken for the betterment.

“As our society is also growing and evolving, the way we are, as a nation, as a country, it’s very courageous for Hansal sir to make this film.”

Aligarh received worldwide acclaim for its direction, storytelling and character development. Many said the film’s depiction of the Indian gay male experience is one of the best. 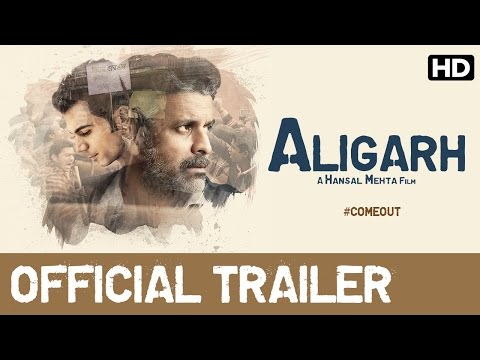 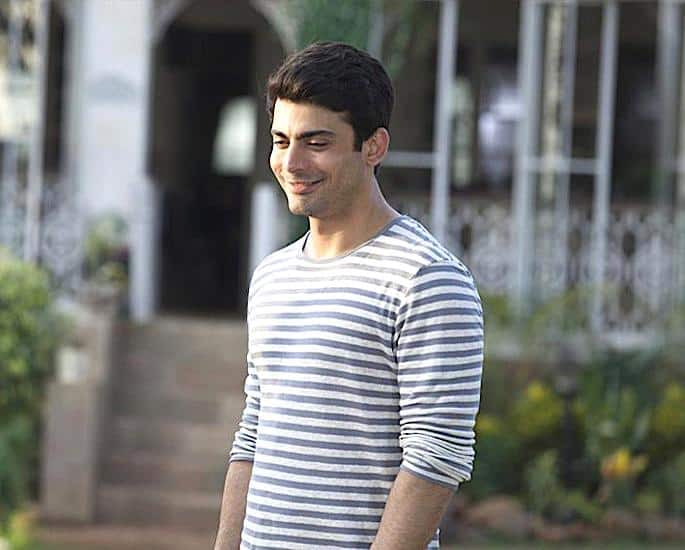 However, Rahul brings home with him a secret. Towards the end of the film, his mother Sunita Kapoor (Rathna Pathak) is horrified to discover intimate photos of Rahul and his boyfriend.

The dashing Pakistani actor spoke to the Hindustan Times on whether he had worries about playing a gay character. Fawad said:

“Everyone has a tendency to be gay.”

“But this movie is not about sexuality. It is just about a family that is trying to sort out their differences.

“Even if someone plays a character like that, why will he or she become an outcast? Give it some years, and things will become normal.

“In the future, everyone who gets worried about these things (homosexuality) will learn to accept them. If someone is a certain way, he or she just is.”

Rahul’s sexuality is just one of the many layers of this bonkers drama. With more to unpack, this family flick is a must for your watchlist. 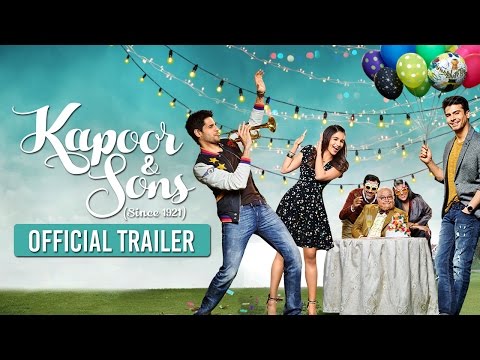 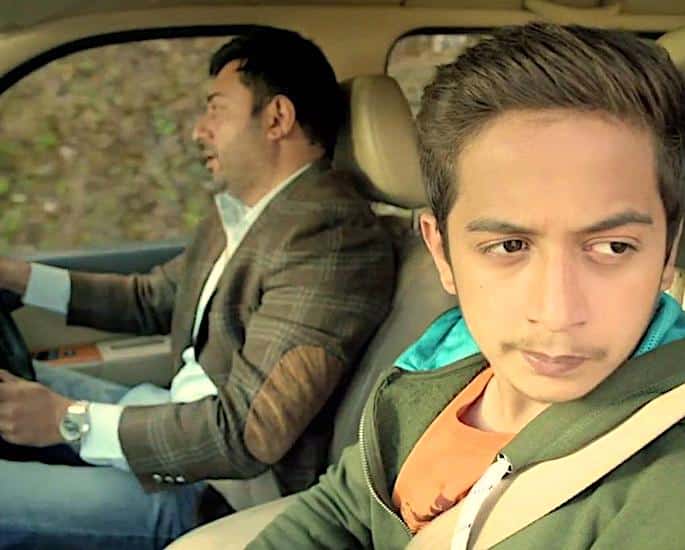 Dear Dad is the directorial debut of Tanuj Bhramar. The film is a coming-of-age drama about Shivam Swaminatha (Himanshu Sharma) and his father, Niti Swaminathan (Arvind Swamy).

During this father son bonding trip, the two discover a lot about each other. The biggest confession in the film is when Nitin comes out to his son about being gay.

“It is a strong subject and a potentially powerful film replete with the tenderness and brutality that those whom we love tend to thrust on us when pushed to the wall.”

With many LGBTQ films dealing with parents and acceptance for their gay children, Dear Dad (2016) flips it on its head.

This film shows how the child reacts to their parent coming out, including Shivam considering looking for ‘a cure” for his father. 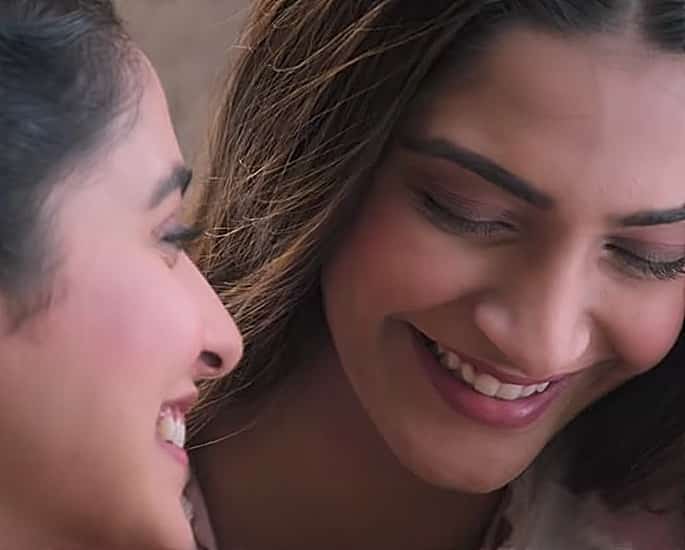 Sweety Chaudhary (Sonam Kapoor Ahuja) comes from a fun-loving, traditional, Punjabi family. Growing up, she dreams of becoming a bride, though when the time comes, Sweety realises she is not ready.

Sweety is in love with a woman, Kuhu (Regina Cassandra).

“It might be a catalyst in their life to break certain paradigms that we all have grown up with.”

“So there is nothing, no problem, no issue, no entanglements in our brain that cannot be cleared by just changing your perspective.” 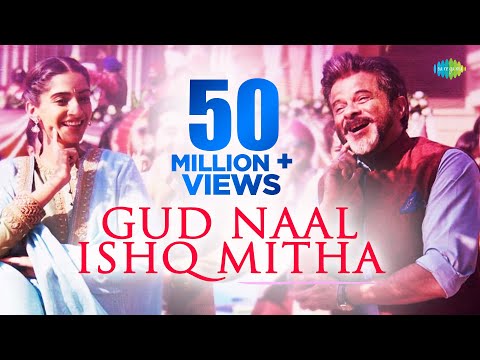 The Bollywood film industry has been known in the past to present some gay themes distastefully relying on unfunny jokes and stereotypes.

However, these films thankfully have come along away from that as they use a more respective and sensitive approach.

The fact most of them were made whilst Section 377 was still in place was impressive. But not many were produced during that time.

But as attitudes towards the LGBTQ community are improving, Bollywood might be open to making more films with gay themes.