Faryal Makhdoom has had to apologise after she used the “P” word to describe herself wearing her traditional Pakistani outfit on Instagram.

Faryal Makhdoom sparked a social media outrage after she used the “P” word to make fun of herself in Desi attire on Instagram.

Wife of British born boxer Amir Khan, she captioned her outfit in Instagram with the word “P**i” using it as a form of slang. Because she is originally from the US, where the term is not deemed as offensive.

However, fans immediately responded to the careless use of the term by her and expressed that it was offensive and “disgusting”

Upon experiencing the backlash for using the “P” word, the 27-year-old quickly changed the caption below her picture resorting to using the full word “Pakistani”

She had captioned the shot saying:

And then after the outburst, quickly changed to caption to:

“The Pakistani inside of me? @deluxe.collections” 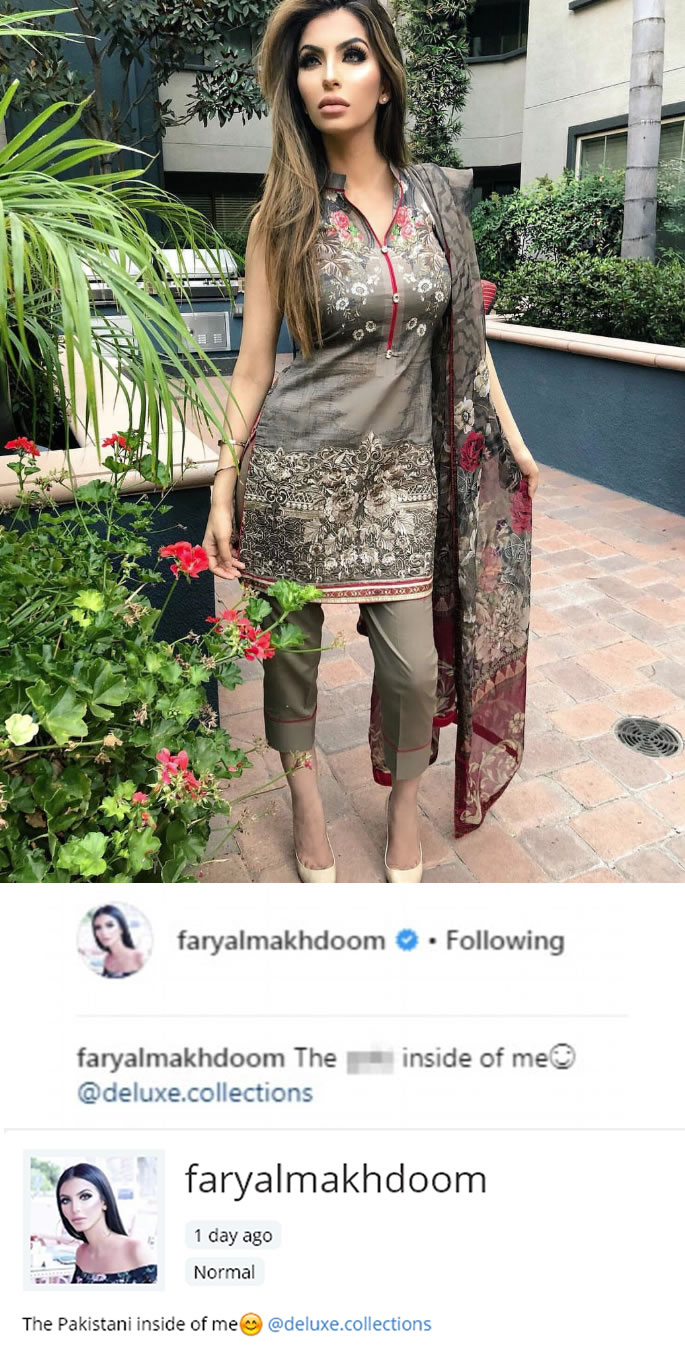 Reactions on her Instagram to using the term which is offensive in the UK said:

“sanam_kadeer – Disgusting for you to use the word “ P**I “ ! It’s a term used by racists and not terminology to be proud of !”

“tamalfalah@aizaaaaa93 – Hey hun I hope you don’t take offense by this but I’m a Brit and find the word offensive. In the 70s/80s it was used in a very derogatory way. Far right and anti-immigrant groups followed by another terms called ‘p**i-bashing’ where they were extremely violent to people of south Asian origin. My dad still remembers having to walk in large packs for fear of getting beaten up. Using a word that is against us doesn’t make sense. It’s like you’re supporting the fact that Pakistanis were not welcome in the UK. As you can see this isn’t false indignation it’s genuine a upset over such a foul word. I just thought I’d try and help you understand as this is what happened to first generation Pakistanis. I didn’t know it was a commonly used term in other countries. I guess we’ve both learned a lesson. Peace and love to you hun ??”

“shaaaaaaaaaaabaaaaay – Faryal you can’t blame American culture. Also it’s not ok for a Pakistani to say the ‘P’ word and then get offended when other people use it. It’s like a black persons saying the ‘n’ word and then getting offended when someone else uses it. Racist words should not be used by anyone fullstop, you can’t justify saying the ‘P’ word just because you’re a Pakistani ?? these racist words carry so much history or pain and hatred, so for once just stop”

“@suzyo9 – Brit and Scot don’t have negative connotations, people that aren’t even from Pakistan are referred to as that oh so innocent abbreviation. It’s used in an abusive way in this country and if you seriously think otherwise then you’ve lived an extremely sheltered existence.”

“corrosivearts- @nicennaughty1976 you obviously haven’t had to deal with racism in the 80’s and 90’s the way Asians have in the UK. It’s the equivalent of saying the N word to black people”

“err.im – @faryalmakhdoom I think you mean’t to say ‘desi’ – the other word is derogatory”

With many more such reactions, within two hours of using the word in her caption Faryal Makhdoom apologised saying:

“Sorry guys, I’m American and saying p*ki – short of Pakistani isn’t offensiver here. But I believe it is in the UK, so apologies… I’m fully Pakistani myself so I would NEVER mean to say it in any wrong way… apologies x” 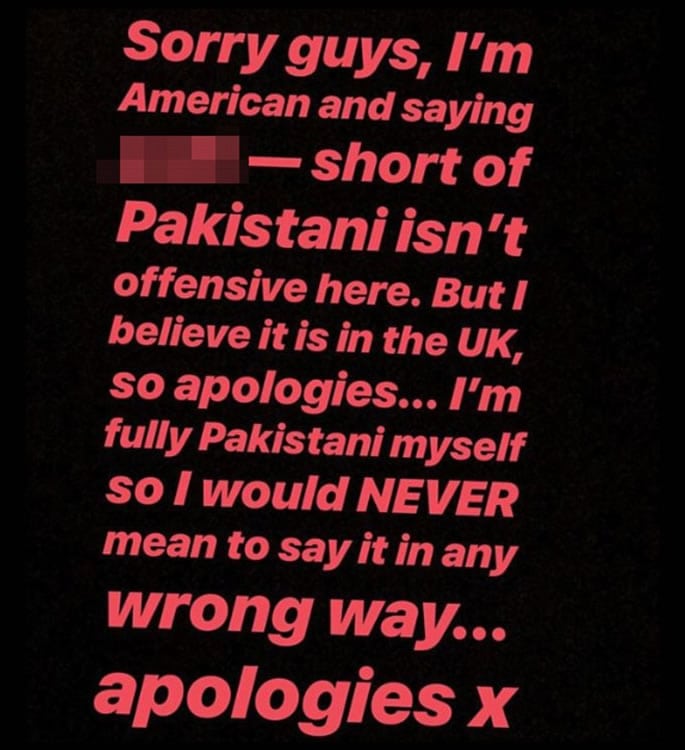 She then posted another apology saying:

“Hey guys! Huge apologies for any offence caused – as a Pakistani myself I don’t deem shortening the word offensive esp as we use it so openly in the US however I totally understand why it can be perceived that way. I didn’t mean any harm whatsoever. Apologies.”

However, with many of Faryal’s fans in the US and abroad, they could not see why the term was offensive, backing her claim that in the US it is used widely by the Pakistani community synonymous to the black communities who use the ‘N’ word.

Some reacted to her apology and changing the caption saying:

“princesssophiaofficial – Lol the term p**i in America is very commonly used by all Pakistanis here. That’s how we refer to ourselves. To attack her for using a word that we use is ridiculous. Some people really need to pick their battles.”

“simplybenish – Look she’s changed the caption, different parts of the world have things that are acceptable. She’s not a bad person. I personally did not feel offended. Why are we so quick to jump on everything??”

“haseebhussa1n Pakistanis on here getting offended by “p**i”.. same ones that throw the word “kala” and “kalu” around, get over yourselves”

“da_real_shaz – BIG DEAL its not racist if ur a “p**i” urself, its d same as wen black ppl call each other the N word, its only racist if ppl of other races use it.”

One comment summed up why she cannot use it in the UK as it is a very derogative and offensive term saying:

“absolutemani @hasina06 well there is a world beyond the USA – and in the UK it’s considered as a derogatory term. Not to mention, she has been in the UK for how long? #justsaying”

After her two apologies, it’s pretty clear that Faryal will not be using the term again on social media being the wife of a British born boxer, despite the acceptance of the word in other parts of the world, where it does not have painful and violent history attached to it.

Nazhat is an ambitious 'Desi' woman with interests in news and lifestyle. As a writer with a determined journalistic flair, she firmly believes in the motto "an investment in knowledge pays the best interest," by Benjamin Franklin.
‘Kiki Challenge’ Men Ordered to Clean Indian Rail Station
Hayes Man Jailed for Smuggling Drugs and Cigarettes