A century from Joe Root helped England to level the Royal London ODI series against India. The hosts won comprehensively by 86 runs.

"Moeen and Rashid are both quality bowlers in this format and sensed we couldn't take risks."

England came back strongly in the 2nd Royal London One Day International (ODI) to beat India by 86 runs and level the three-match series 1-1.

Winning the toss, the hosts opted to bat first on a sunny day at  Lord’s Cricket Ground on 14 July 2018. Temperatures reached high as 30 C, before dropping down later in the day.

It was a lush green outfield, perfect for batting. Captain Eoin Morgan took a slight risk by putting India in to bat, knowing they were good at chasing.

Bruce Oxenford (Australia) and Alex Wharf (England) were the two umpires for this important game.

Similar to the 1st ODI, England was on top before wrist spinner Kuldeep Yadav came into the attack.

With the English score on 69, Yadav bowled Bairstow around his legs for 38 in his first over. The opener, unfortunately, could not stop the ball dragging onto his stumps. 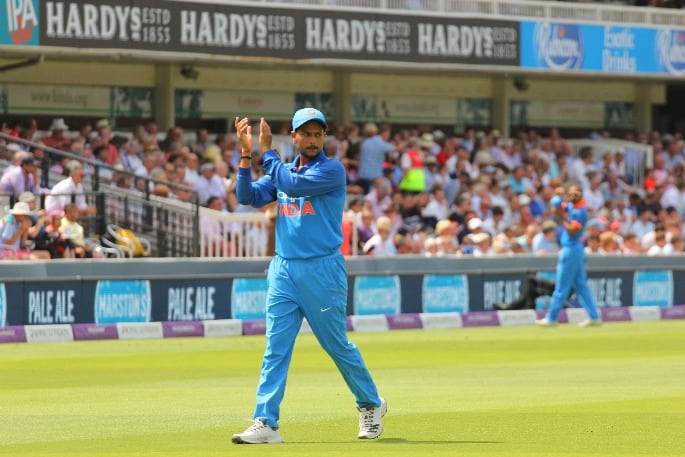 Yadav had two wickets when Jason Roy’s (40) slog sweep found Umesh Yadav at mid-wicket to leave England on 86-2. Kuldeep was clearly once again causing a lot of trouble to the opposing side.

Morgan and Joe Root, however, steadied the ship. Root was a key and calm man, reaching his 28th half-century in 115 ODI matches. It was a well controlled and composed innings from Root at this point.

This was an important passage of play. India needed wickets, whilst England required this pair to stick around for a little longer.

Looking to be the aggressor, Morgan also got to his fifty.

But after all the hard work, Morgan hit out to Shikhar Dhawan at deep mid-wicket off a full tosser from Kuldeep Yadav. Dhawan had to only judge the boundary rope, without hardly moving.

It was a slow and disappointing walk back to the dressing room for the English skipper.

Shortly afterwards, Ben Stokes trying to trickle it down to the third man feathered it behind to Mahendra Singh Dhoni off Hardik Pandya for just 5. This was quite an uncharacteristic shot from Stokes at this critical juncture. 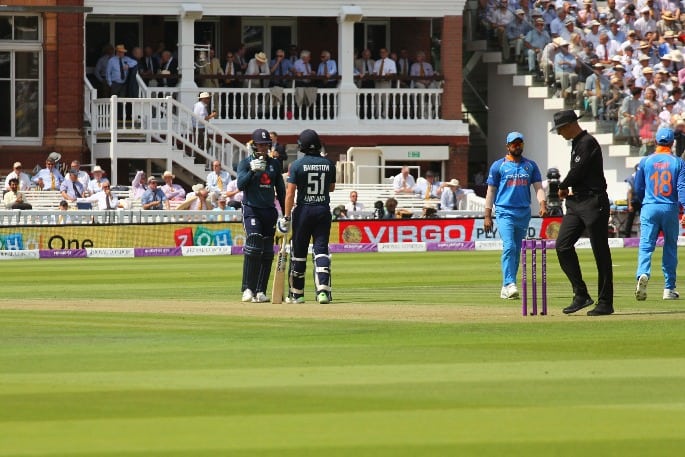 To add further salt to the wounds, Jos Butler was gone for 4, caught behind by Dhoni off Umesh Yadav. From 86-2, England went 214-5. The acceleration did not quite happen for England, instead, wickets kept tumbling.

But a timely partnership of 52 off thirty-one balls from David Willey and Root brought England back into the game.

After being in the 90s for a while, Root completed his first hundred at Lord’s and against India in ODI cricket.

England had a good finish to their innings, especially with a little sloppiness creeping in from the Indians.

Willey reached his fifty too after running two quick runs. This is exactly the spark England were hoping for.

In the end, Root was run out, when a direct throw from Dhoni hit the wickets. But the damage was already done. Root equalled Marcus Trescothick by reaching his 12th hundred in ODI cricket. His 113 included eight 4s and one 6.

With an 82 runs 7th wicket partnership by Root and Willey, England had realistic a chance to level the series. England scored ninety-fours runs in the last 10 overs, to summit a respectable total of 322-7 in their 50 overs.

The Indian openers went into the middle fancying their chances. Even their fans began to chant India, India. 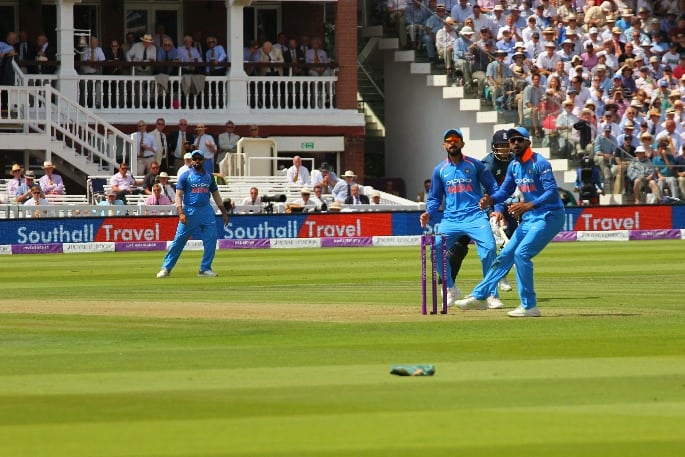 But in a rush of blood and playing a wild hack Sharma was bowled by Mark Wood for 15. The centurion from the previous game was not at his usual best. This was a timely break for England as India reached fifty in the very same over.

And in the next over, Dhawan (36) slashed the ball through the offside to only pick out Stokes at backward point off Willey. This was another key wicket for the home side.

Then a great low take by Butler behind the stumps was enough to get rid of Lokesh Rahul for a golden duck. With the ball dipping so quickly on Butler, it was a fantastic catch. The length ball from Liam Plunkett to remove Rahul left India in a spot of bother at 61-3.

England were bowling quite magnificently, along with their good line and lengths. Just as Kohli (45) and Suresh Raina were rebuilding the Indian innings, Ali got the Delhi man lbw. 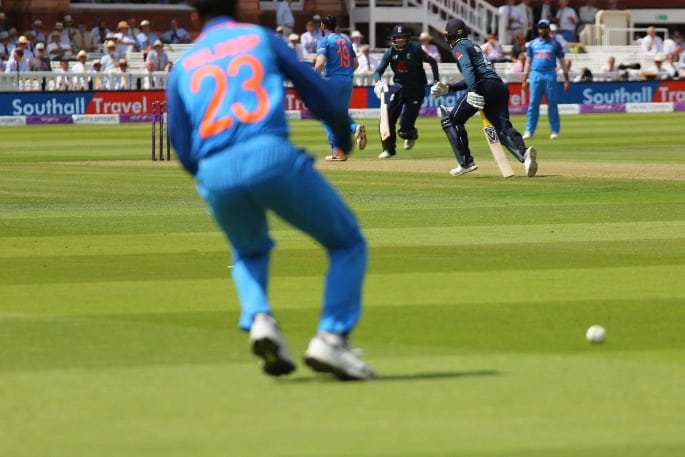 It was a wicket to wicket delivery from the England off-spinner, which outdid the Indian skipper. In the context of this match, this was a huge a wicket.

Dhoni was the next man in. With the removal of Kohli, England were in the ascendency.

Raina, looking for the short boundary was bowled out by a googly from Adil Rashid on 46. The left-hander never really got going. This was a helpful wicket for England, pushing India further into the cauldrons.

It was good to see the English spinners working in partnership and feeding off each other.

With the rate going over 10, India were now struggling on 175-5. India were hanging by the ropes. By this time surely something had to give. Moments later, Wood got Pandya down the leg side, caught behind by Butler for 21. The game was virtually now England’s barring any miracle.

Umesh Yadav (0) had a short stay at the crease, courtesy of some smart stumping by wicketkeeper Butler.

The match began to drift away from India in the last hour or so, with the inevitable around the corner.

The crowd were not amused and perplexed by the lack of intent by Dhoni as he eventually departed for 37, caught by Stokes at cow corner off Plunkett.

Even though it was not the best of days for Dhoni, he did achieve a personal milestone, completing ten thousand runs in ODI cricket.

Plunkett claimed his fourth wicket by removing Siddharth Kaul lbw for 1. Chahal was the final man to go as he hit the ball straight to Stokes at long on off Willey.

At the post-match presentation, Indian captain Virat Kohli spoke about the loss and praised the England spinners saying:

“Today was a day when we couldn’t get going. Moeen and Rashid are both quality bowlers in this format and sensed we couldn’t take risks. They created pressure in the middle overs. 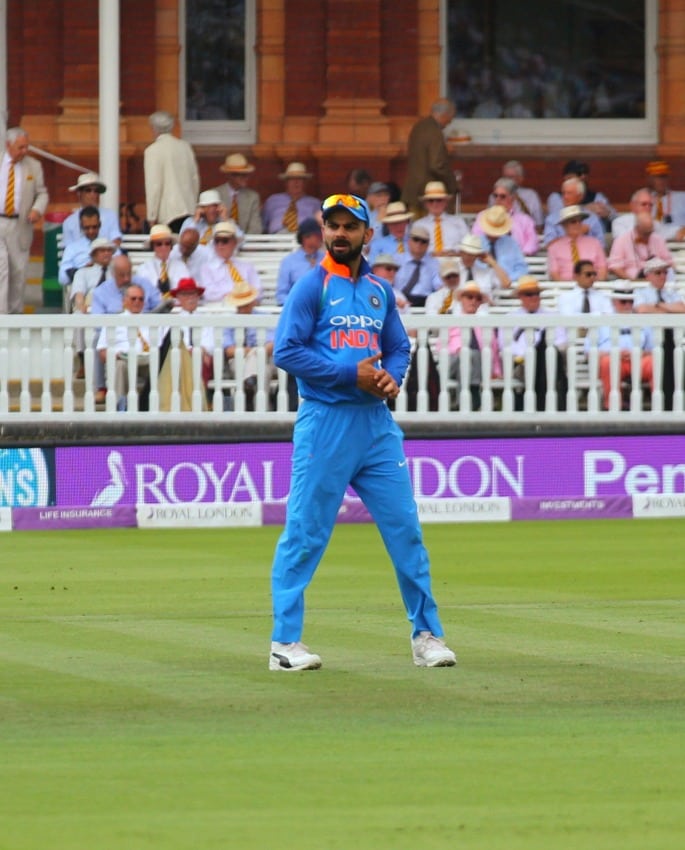 “If it was one down we could have attacked a bit more. This thing comes up again and again, it’s unfortunate when people jump to conclusions. We all have bad days, today was a bad day for everyone.”

After collecting his man of the match award, a relieved Joe Root highlighted his return to form:

“Same for anyone when they are struggling slightly, have felt good in practice and was about trusting it and cashing in when you have the opportunity. Did that today.

“The way we’ve been playing this summer has been excellent and now nice to contribute to that.

“If we are playing well and others making big scores that’s a great position. Thought the way we went about this today was outstanding, ruthless.”

Going into the final match of the series, India might want to look at their playing XI. Without Bhuvneshwar Kumar or Ravichandran Ashwin, they do not bat deep.

The deciding match takes place at Headingley in Leeds on 17 July 2018.

View more images from the game in our gallery below: 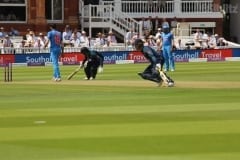 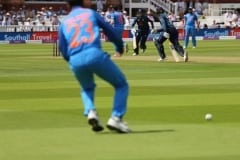 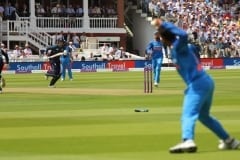 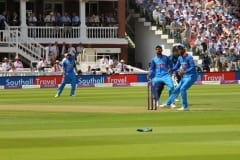 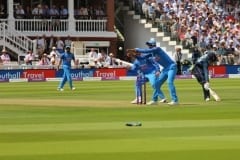 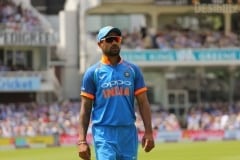 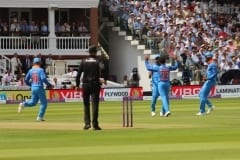 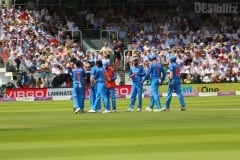