East Meets West: The Evolution of Yoga in Britain

DESIblitz delves into Britain’s growing health and wellness industry to explore how yoga has become part of mainstream Western culture.

Once a concept exclusive to the spiritual yogis of northern India, yoga has expanded in its popularity over time and is practised by millions worldwide.

In Britain, its popularity has grown to occupy a market worth over £875 million.

According to the latest health and wellness trends, this phenomenon shows no sign of stopping.

People of Indian heritage might feel slightly uncomfortable with just how rapidly the ancient practice is being assimilated into Britain’s mass culture.

Given the two countries’ complex colonial relationship, yoga’s cultural place is in dispute.

The Origins of Yoga 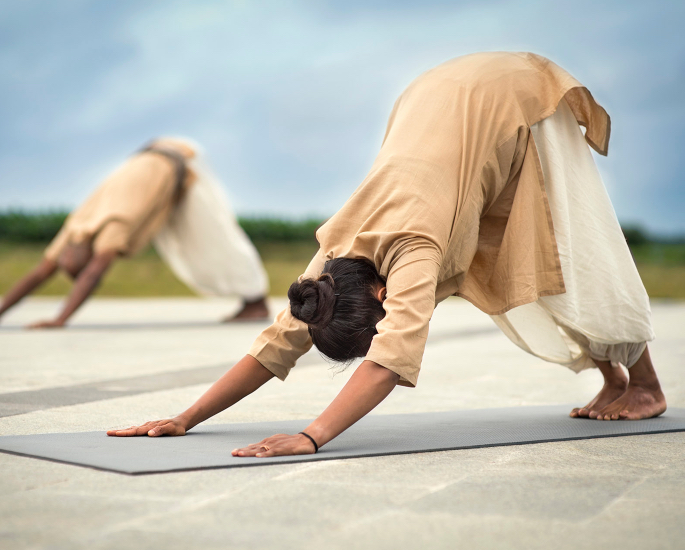 The contemporary debate on cultural appropriation has sparked a huge amount of research into yoga’s cultural origins. Studies have revealed that modern yoga is drastically different from its ancient roots.

While modern forms of yoga tend to focus on its physical benefits, traditional yoga aims for holistic happiness.

The word ‘yoga’ itself means ‘union’ – a union of physical, mental and spiritual health to bring inner balance and harmony.

Much of modern yoga barely skims the surface of a rich reservoir of spiritual wisdom. Its teachings originate from the Vedas and the Upanishads, some of India’s most sacred scriptures.

In fact, the yoga we are familiar with dates back to as recent as the 1930s when, under British rule, Indian physical culture merged with Western ideals.

Popular poses like the classic Sun Salutation and Downward Dog are likely to have more in common with European gymnastics than with the yoga of ancient India.

While this may be surprising for many, historians have shown that yoga has been through countless transformations in India, even before it was colonised.

Vedic yoga morphed into Jnana yoga, which then gave way to Hatha yoga and Tantra yoga.

Constantly evolving to adapt to new trends of thought, yoga has flourished into a vast spectrum of practices all over the world. 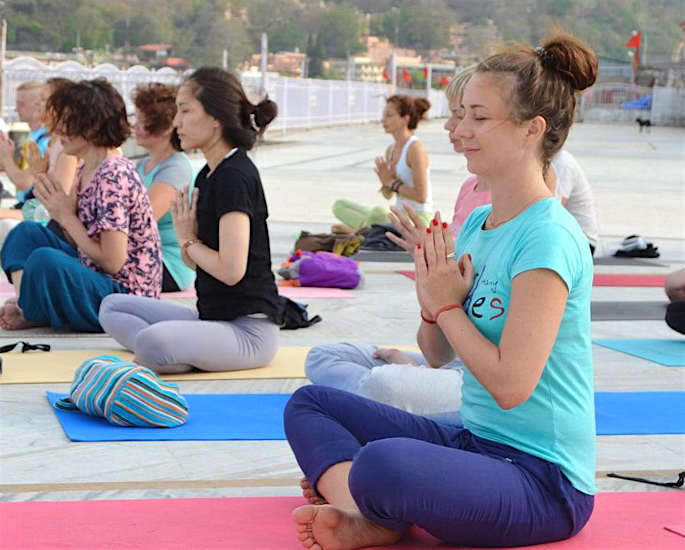 Suzanne Newcombe, a leading scholar of modern yoga, estimates that the number of people practising yoga in Britain rose from 5,000 in 1967 to over 50,000 just six years later in 1973.

By 2019, this figure had once again increased tenfold. Around 500,000 Brits practise yoga regularly each week.

In the age of rampant consumerism, yoga has become a worldwide fitness commodity.

David Gordon White, a specialist in South Asian religion and culture, comments on this trend:

Viral videos of Spandex-clad women in extreme poses circulate social media. Modern yoga has turned into a digital circus of contortionists all competing for followers.

Yoga is branded and packaged into countless hybrid forms. Most don’t have to scroll too far down their Instagram feed to find a unique style of yoga invented specifically for their consumer needs.

Some are more bizarre than others. Among hip-hop yoga and eco yoga exists tequila yoga, broga (for men), doga (with pet dogs), karaoke yoga, and even goat yoga. No market, however sparse, is left untapped. 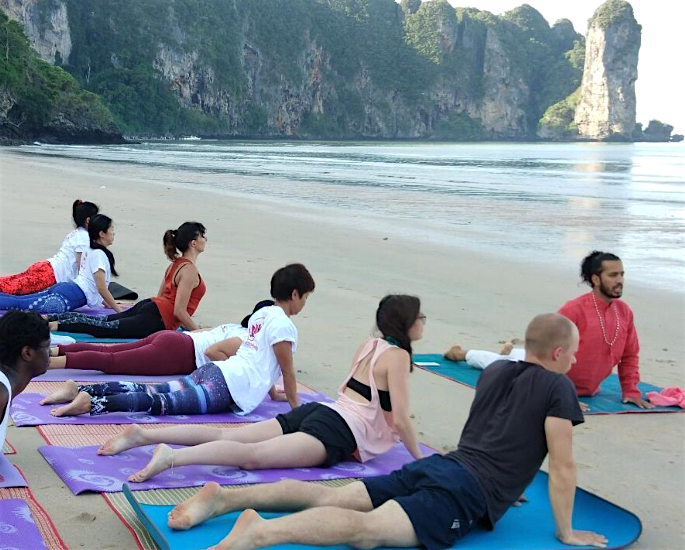 Yoga is not the only Indian practice stocking British shelves.

From Om tattoos to Ganesh T-shirts, bindis to Sanskrit-named skincare products, Indian culture has found its way to the forefront of mass markets. It is considered the perfect symbol of spiritual health.

Has yoga turned into yet another cash cow devoid of personal value?

Up until recently, yoga was largely marketed as a brand of fitness with little acknowledgement of its sacred roots. However, the wellness industry’s rapid expansion means that yoga is also being sold as a spiritual commodity.

This is no surprise, given that all over the world organised religion is being replaced with secular spirituality. This is especially true for millennials, with a large majority identifying as “spiritual but not religious”, or ‘SBNR’.

For many, yoga is a way to connect with a sense of spirituality without having to subscribe to a particular set of religious beliefs and rituals.

And with the rise of self-care as an antidote for burnout culture, yoga offers some much-needed therapeutic relief from a hectic lifestyle.

More and more practitioners are exploring yoga’s spiritual traditions to counteract the claustrophobia of a commercialised world.

The health industry has wasted no time in capitalising on this shift.

Yoga mat sales are at an all-time high. Expensive weekend wellness retreats are springing up across the country. Meditation is the new buzzword for happiness.

Though it’s not the only health trend to blow up in recent years, yoga’s mass market is especially ironic given its traditional focus on detachment from the ego and material possessions.

There is no doubt something deeply perplexing about someone spending over £3,000 for a weekend of exercise and meditation on a luxury, remote, ‘Instagrammable’ patch of the British countryside.

Yoga can just as easily be practised in a bedroom or garden, at no cost and with no need to find the perfect pose to prove to followers that you are, indeed, a #yogaaddict.

The Future of Yoga 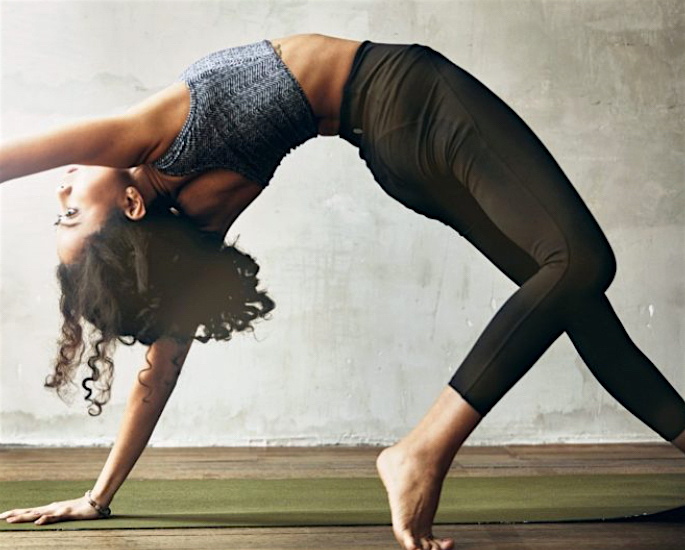 Britain’s thriving yoga market is also a sign that more and more people are willing to prioritise their wellbeing.

With thousands actively searching for a practical way to manage stress, anxiety and depression, the stigma around mental health is diminishing.

Regardless of whether it is practised on a rooftop or on horseback (yes, this does exist), yoga provides fundamental mental health support that anyone can benefit from.

Trends like broga are making yoga more inclusive for men who might otherwise struggle to seek a healthy outlet for stress.

Other forms of yoga are growing fast. Japanese Jiriki yoga and floor-based Yoga Nidra draw from ancient practices and open even more doors to stigma-free self-care.

Yoga follows the latest trend of mindful movement, along with Tai Chi and Qiqong.

There is a growing demand for platforms that merge physical and mental health.

Companies like Equinox are leading this change. They combine research in science, technology and subculture to provide high-performance ‘fitness meditation’ classes, of which yoga is a key part.

While modern practices might be far from traditional, yoga has a wider range of meanings than nearly any other word in the Sanskrit lexicon. It has always been reinvented to fit new cultural contexts.

Tech-savvy, health-conscious Britain is on its way to revolutionising yoga even further. But will this revolution tear yoga from its roots, or simply honour them in a new way?